This series of articles is designed to give you enough information to at least determine where I’m coming from, and what you might expect from my professional search engine optimisation services and/or my SEO seminar and workshop. For those who have certain skills (e.g. copywriting, marketing, web development) and/or relatively modest goals, they may be all you need to move forward on your own. If you quote (or benefit) from any of the following, I request only that you reward the content with a link. Cheers all.

To immediately understand the importance of true and genuine relevance, simply consider the following scenarios:

A city street. A woman collapses and is having trouble breathing. A man steps forward and says; “We must perform an emergency tracheotomy!” He has just emerged from a nearby hospital, he is wearing surgical garb, he carries an official ID tag, and he is surrounded by other hospital staff who obviously treat him as their superior. I say pass him a knife and let him get on with it, and you’d probably agree.

A city street. A woman collapses and is having trouble breathing. A man steps forward and says; “We must perform an emergency tracheotomy!” He has just emerged from a nearby bar, and is wearing a toy stethoscope around his neck and tinfoil on his head. He has a friend with him who breathes cheap whiskey in your face when he assures you the man is a real doctor. Let me tell you, if I have a knife to hand, it stays in my hand and is not pointed at the woman’s neck.

Both men deliver exactly the same message. The difference between them is their visible credentials. Even if the first man isn’t a real doctor (and is instead Ferris Bueller on his second day off), what he has to say is judged to be more relevant because of the visible supporting evidence.

Note the ‘visible’ part. I’ll return to this point in a moment.

When you look closer at the scenarios, you will note that the status of the people/institutions supporting each man is of great importance, and it is here that I will present you with a third scenario:

A city street. A woman collapses and is having trouble breathing. A man steps forward and says; “We must perform an emergency tracheotomy!” He’s dressed like a surgeon, but you suspect he may have trouble holding a knife, as his hands are occupied with the manipulation of a series of hand puppets, all of which appear to repeat the same phrase over and over again; “Best doctor in town! Best doctor in town!” 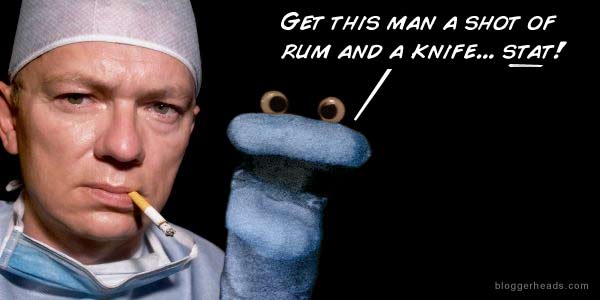 That may sound ridiculous and totally unlikely to you, but the equivalent in the web market is actually sold as a service by some people; they create a series of websites that only pretend to be the genuine web presences of real people, and charge money for links to other websites, as if this counts for something. Often (and I’m not kidding) this involves stealing content and washing it through a thesaurus a few times so it appears to be original while remaining relevant to whatever keyword market they’re chasing.

Other companies offer to negotiate ‘carefully researched’ links with credible websites, but more often that not this is an outright lie hidden behind a claim that they cannot list the sites involved because they are protecting their intellectual property. Even if such a company/operation is totally above board, the type of site owner who can be bought once can be bought again, putting the link to your site alongside ads for anything from miracle diets to generic Viagra, which brings us to our fourth and final scenario before moving on;

A city street. A woman collapses and is having trouble breathing. A man steps forward and says; “We must perform an emergency tracheotomy!” You are immediately assured by his companion that he is not only a real doctor, but he is in their considered opinion the very best doctor for this or any other job. He then goes on to explain that he also knows a guy who can offer you a great deal on a reliable used car with great finance terms.

So by now you should understand that you can’t just give up and buy relevance. You should instead work out how to take the support for your company, service or cause that exists in real life, and work out how you can help this to manifest itself as something that search engines can see and appreciate (typically, a series of hyperlinks to your main site).

The odds of you earning such links from the average web user improved tremendously with the advent of the micro-blogging tool Twitter.

[Psst! You are already within a stone’s throw of my blog, and you can find me here on Twitter.]

Previous to this, blogging took a little more thought and dedication, which meant that fewer people were doing it, and most of those who did blog long enough to create a relevant presence thought long and hard before committing to the publication of a link.

Somewhere between blogging and tweeting is a the social media whirl of Facebook and MySpace. You should still attempt to foster goodwill in these communities where possible/appropriate, but you should do so knowing that it often means far less in terms of visible link popularity; the reputation of any given profile/page in these communities is largely invisible to Google, as is much of their content and, subsequently, their cumulative relevance.

Most weblogs and Twitter channels, on the other hand, have a visible reputation and yes, even if a link to your site comes via a URL-shortening service like bit.ly, Google will still recognise this (and any other ‘301 redirect’) to your site and an endorsement for you specifically.

How any given organisation might hope to approach this opportunity differs greatly according to their circumstances and customer base, but the one thing you cannot do is fake it. Even if you’re completely sincere in your efforts to negotiate links, search engines strive to know the difference between that and links that are offered spontaneously. Imagine you’re a cross between a search engine and a person who’s just a little judgemental. Now watch as your attitude changes through the following statements:

By far the safest and potentially most beneficial option is for you to communicate and integrate with your customers and potential customers on their terms and be as genuine as possible about this. Because the percentage of people who blog or even micro-blog is still relatively small, often you will be dealing with a very small audience. However, it is an influential audience, especially in the eyes of search engines; you reach the larger audience through improved results in search engines… if you are generating inbound links to a site with a scaled/generic keyword strategy (see: Relevance #1).

How you go about this and at what level you interact/integrate with bloggers and micro-bloggers is going to be determined less by your expertise in the ins and outs of Twitter etc., and more by your expertise in your chosen field and your knowledge of your customers and people in general. Many people sell social media marketing consultancy as a service, but often it’s as simple as treating people like human beings and not conducting business like a bastard.

If you or any of your staff conduct business like a bastard (even just a lazy bastard), you may wake up one day to find that people are suddenly lining up to hit you with a stick. If you can’t weather a storm like this (i.e. if you attempt to resolve it by shutting down your channel, censoring fair criticism, or pretending that you didn’t actually say/do this or that), you may even rate a mention in mainstream media that makes you look as guilty as all hell because it will at least appear that you chose to avoid the conversation rather than take fair criticism on the chin. You need to be prepared to take the good with the bad, and the only reliable way to minimise the risk of something bad happening is to avoid doing bad things to other people. Again, we arrive at another lesson showing how your relevance should be radiating from the centre, and not painted on like livery. If you’re just putting on a happy face, someone is going to delight in ripping that mask away, I can guarantee it.

As with data relevance, I subscribe to the school of thought that a little of my knowledge in your hands goes a lot further than a little of your knowledge in mine, and with that in mind I ask you to consider my SEO seminar and workshop and how a little education might help you and your staff gain the full advantage of simple engagement with your customer base.

To close, I should point out that there are many examples of business and organisations that cannot realistically hope to have everyday customer support manifest itself as link popularity in search engines. A private STD clinic is one extreme example, and not that this is any way the same, but – even in this bold new age of handheld gadgetry – most people aren’t likely to plug Sainsbury’s from inside the store no matter how thrilled they might be with their shopping experience, because of the stigma involved. No-one wants to look like a corporate shill.

In such cases, you may need to generate visible support with a fitting overture, genuine altruism, or maybe even some good old-fashioned art and entertainment…. and it is on this note that I invite you to proceed to the concluding chapter of this educational trilogy; Relevance #3.