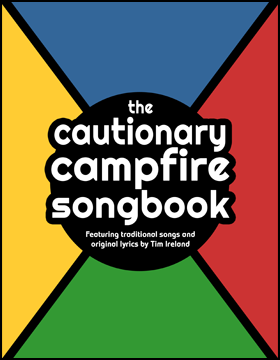 Campfire songs are your classic ‘under the radar’ educational tool. They allow young people to engage in controlled explosions of naughtiness while simultaneously learning some important lessons about life. When I finally noticed this, I started editing and writing songs again… this time in my role as a volunteer with young people.

The result is The Cautionary Campfire Songbook (Amazon (UK)

), and the associated album produced in conjunction with Koit: Cautionary Campfire Songs (Amazon

Songs range from wholly traditional and untouched songs, to partially edited/modernised versions, and a bunch of entirely original lyrics, many of which are about The Internets. Lessons range from simple undergarment hygiene to online safety & etiquette.

With luck, the little darlings won’t notice that they’ve learned anything until it’s far too late.

(Buy it now from Amazon (UK)

All of the songs about Teh Internets appear on the CD/album, and each has their own music video on Teh YouTubes. Below is an array of music videos published so far. Enjoy: