09:10
Ah me, the simple pleasures in life. Years ago, I used to be a hardcore DC junkie (with Superman, Batman, Impulse, Lobo etc. on regular order). Sadly, these days I’m way too poor to enjoy this kind of luxury, but on Saturday I dragged my sorry butt down to the comic book store in Guildford and enjoyed a solid hour of poking through the remaindered boxes. 25p a comic, ladies and gentlemen – can you imagine the joy of such a bargain? Several gems were found, and much catching up took place.

09:12
This should keep you busy for at least a few seconds – ohnoitisnt.com. All that’s missing is a few thousand chevrons and a dedication to Usenet.

09:19
Here’s a nice follow-up to that whole Sainsburys/Virgin spam debacle. Assuming you care, of course.

A big collection of Lost Highways for you to ponder over. On the same subject, while the Third Reich didn’t quite last the thousand years some expected, a few of their Polish Autobahns are still making a go of it.

10:09
Hammer your bandwidth and treat yourself to a bloody great computer animated short this Christmas. This piece starts a bit slow, but the pace improves dramatically once the creator/director gets over showing off the scenery he’s so painstakingly created. Definitely worth the download. 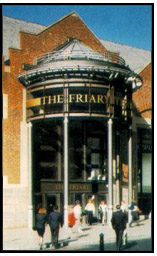 According to a press report I read on Sunday (no link available, sorry) she was first accosted in front of McDonalds in the upper level food court. This is always very, very busy – probably doubly so this past Saturday. There’s nearly always a security guard posted here too, due to the high number of youths who hang out in the area.

Despite this, she and her friend were in a position where they felt harassed enough to run from the group of teenagers. With The Friary being built like it is and all reports referring to her having some clothes torn off while going up an escalator, it looks like they were pursued for some time, up and down a few levels, through one of the busiest places in Guildford – then led through the (always busy and well-lit) covered land-bridge that gives access to the Bedford Rd car park. Right past the cash machines that always have a queue of a dozen or so people (layout and map).

The fact that an uninterrupted attack could take place in the stairwell of a full-to-capacity 1200-space car park holds no surprises, though. There’s some construction going on there at the moment, so a lot of sections have been boarded shut or obscured by hoarding (with, we can presume, little or no construction staff at work in this glorious holiday season).

Apart from that it all but defies belief, but reports are coming in of inconsistencies in the story and the management of the Friary is questioning the police version of events, saying that CCTV footage was being examined and that they had “no information to suggest the attack started in the shopping centre”. We shall see.

11:57
Well, I’m off home. Please do try to have a safe and happy Christmas – and don’t do anything stupid like drive with a few drinks under your belt, OK? Merry Christmas, Joyeux Noel, Frohliche Weihnachten, Prettige Kerstdagen and Feliz Navidad. If I’ve missed anyone, just click here for the rest.

10:31
Then one foggy Christmas Eve,
Santa came to say:
“Rudolph with your nose so bright,
Won’t you guide my sleigh tonight?”
Then how the reindeer loved him,
The bloody hypocrites.

(Oh, and here’s the Secret Origin of Rudolph.)

10:40
Many unkind comments have been made about the covers of my books. Perhaps next time, I’ll use the O’Reilly Book Cover Generator. Or not.

11:07
This snowball game is nice and violent, with excellent Kennyesque figures on the winter warpath. However, if you just want to piss off the neighbours, then nothing beats a bit of target practice.

11:19
Check out this guy’s phat toilet. Racing stripes make the jobbies flush away faster, yes they do…

Once again, apologies to bacon lovers who’ve ended up here because of that stray link in the mailbag (’tis all explained in the archives). Presented here for your troubles (and, hopefully, for your enjoyment) is what passes for a men’s fashion store in the Netherlands – and yes, they do have a website. Enjoy.

16:00
How disappointing. I’m nowhere near as evil as I thought I was.

16:13
The BBC are re-broadcasting the 1981 serialisation of Lord Of The Rings. Ho-hum. I’ve read the book, I’ve seen the movie – the orc did it both times. So much for the ‘hollywood ending’ theory.

09:43
It’s beginning to look like the seemingly impossible scenario of a teenage girl being dragged through a busy shopping centre and raped without anybody doing anything is just that – impossible. Latest reports indicate that Friary management have scoured the CCTV footage and found nothing. The investigation continues.

09:50
A popular link yesterday; Pedestrian Killer . So popular, in fact, that demand regularly overloaded the server. Access seems a little better today, so go and try it if you must – just be warned that it’s non-PC and far from challenging.

10:50
The latest challenge at fark is to Photoshop this ad for MSN Broadband.

My entry’s in a little late for this one – but it was worth a try all the same, I thought.

You can see the comp and vote (for me, please) here.

11:37
The latest edition of Celebrity Bestiality arrived hot off the presses today with the inside scoop on the Winona Ryder shoplifting saga. I look forward to attending the rally on January 11th.

13:11
Well, it’s official. Tempo just bit the dust and just about anybody with goods under warranty (from about 1997 onwards) should consider themselves well and truly screwed. Even if you were stupid enough to fork out for that great British rip-off, the extended warranty, Tempo regrets to inform you that ‘you are an unsecured creditor and if your product develops a fault (you) will not receive payment from Tempo’. Tempo are, however, helpful enough to provide a list of manufacturers should you wish to delude yourself into thinking that they’ll happily accept a passed buck or three – and good luck with that. If you want more information, the Tempo site is down, down, down at the moment, but some navigable information from just before the collapse is still live via Google’s cache.

13:46
I’ve just been honoured in alt.humor.best-of-usenet – doubly so in that they considered my little ditty worthy of Rot13 encryption. 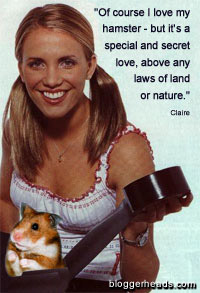 Sorry gang,but I feel that it’s my duty to remind you that this is far from the end of the matter. Now we’ll have to tolerate 12 months of multiple solo career attempts.

For the record, it should be noted that the former members of the all-dancing, non-musical-instrument-playing ‘supergroup’ insisted that that there was no animosity involved. Of course, this statement comes from a group that as little as a month ago insisted that the release of a ‘greatest hits’ album didn’t mean that they were breaking up in the near future.

A subtle hint as to why appeared amongst much tearful babbling on a Steps messageboard. Said one poster:

“If they split up a few weeks ago they wouldn’t have sold as many CDs and merchandise over the Christmas period. By splitting up the day after Christmas they have made sure they have sold enough to make sure they never have to work in Tescos.”

Whisper campaigns have already begun, and Claire seems to be copping the best and the worst of it. Her solo album must be due first, then.

16:56
Aww… look at those cute, smiling little kiddies. Why are they so happy? Because Daddy locks his gun away before going out to get liquored up.

10:01
Bored at college? Who isn’t? Tell you what; next time you’re on campus, you might want to impress contemporaries with your skills in the ancient art of Squirrel Fishing. While we’re on the subject, here’s an interesting theory regarding squirrels and why they act so nuts (pun intended). 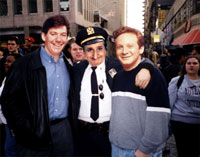 Worth1000 is now fully beta-tested and ready to roll!

The public site will launch tomorrow, so if you’re not too hung over to focus on a few pixels, get over there for the inaugural Photoshop challenge, involving a picture of the webmaster Avi, a NYC cop, Drew from

fark.com and some woman who just wanted to be in the picture.

13:04
My weblog twin is a woman! Now it’s official – there is something fundamentally wrong with the universe…

Tim is the sole author of Bloggerheads.
View all posts by Tim Ireland →
This entry was posted in Uncategorized. Bookmark the permalink.