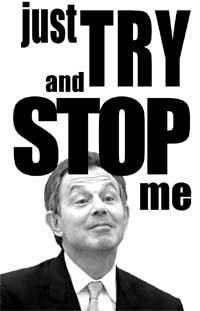 Assembly at 2pm on Monday August 1 outside Parliament.

I have 250 A3 posters that I plan to share out. I couldn’t get past my the original design (right), which I feel has a lovely dual message.

Do not give up. Plan to attend, and then get off your arse and attend.

Still wavering? Then consider the following (heads-up via rhetorically speaking):

Guardian – Westminster war protester wins right to stay: The court ruled that legislation being brought in to control demonstrations around the Houses of Parliament did not apply to 56-year-old Mr Haw. The new rules state that, from August 1, anyone wanting to demonstrate in the area must have authorisation from the police “when the demonstration starts”. Lawyers for Mr Haw pointed out that his demonstration had actually “started” four years ago and therefore he did not have to apply for authorisation.

This is good news, but Brian Haw’s victory does nothing to help the rest of us (well, not much… see below). If the Blair government do anything so outlandish that it prompts immediate protest, from Monday the police will have the legal right to shut down any such protest at the very seat of our slowly dwindling democracy and arrest anyone they damn well please, just for being there.

And that’s the real point of this stupid law. It may have been sold to willing MPs who (if they are human) feel pangs of guilt every time they have to pass Haw’s encampment, but what this is really about is stifling dissent.

An incident like the one I outline above would come dangerously close to what happened in Uzbekistan.

Think I’m being alarmist? Then consider Karimov’s justification for shooting protestors (he claimed they were terrorist extremists) and watch closely over the next few days. See how many messages you’re fed about protestors being extremists and/or an extremist element among the protestors. Consider that peaceful protestors in this country have been stopped, searched and detained under anti-terrorism legislation.

I’m not saying I’m up for 8 bullets in the back on Monday, but I am saying that this law is a big step in the wrong direction on a *very* slippery slope.

Only you can help to reverse the decision and/or make the public more aware of this law (that was very cleverly slipped out late one Friday afternoon).

And there is hope.

Many MPs meekly accepted the proposal because they wanted to be rid of Brian Haw. Some did not consider the full implications of the law and/or the extent to which Charles Clarke would exploit it.

Now, things are different. They might be convinced to challenge the law.

Find out where your MP stands (if you can; mine is sunning herself on a beach in Cyprus somewhere) and make your views known.

Then come along on Monday.

If the turnout is poor, Blair will have been sent the message that he is slowly but surely beating the country into submission.

I repeat: Do not give up. Plan to attend, and then get off your arse and attend.

Oh, and do tell your friends. Democracy loves company.

I hope to see you there.

UPDATE – On the day, I’ll probably be too busy contributing to the event to document it. If anyone with a notepad or digital camera wishes to come along and snap/jot away, then please get in touch via email so we can arrange a full thingie.

UPDATE 2 – My eldest son (9 going on 15) has been bugging me for a while about this kind of thing. He wishes to attend a protest. School holidays or not, I have *serious* doubts about bringing him to this one… because the police will do what they are told to do, and my name’s been on their subversive terrorist list for a long time. Tough call. Made even tougher by the police/media who will claim that I’m using him as a human shield. If I allow him to come (and that’s a *BIG* if) we will have to back off pretty early as the police work to marginalise the protestors. Tough, tough call. Do I include/teach him, or leave him at home and work to protect him? (Please note, RWCs, that the aforementioned teaching involves pointing out the precious lovelies pushing copies of the Socialist Worker.)

UPDATE 3 – *That* said, if you have any doubts about your own personal safety on Monday, all you need to remember is tanks at Heathrow. Ask yourself some serious questions about fear… and if your government is willingly using that fear against you.

Tim is the sole author of Bloggerheads.
View all posts by Tim Ireland →
This entry was posted in The War on Stupid, Uzbekistan. Bookmark the permalink.