Let’s put GREAT back into BRITAIN – you can do your bit! 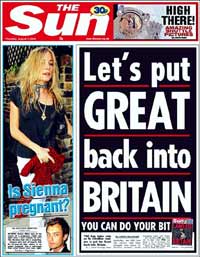 The Sun – Put Great back into Britain: SUN readers can take the lead in putting the Great back into Britain by reviving the lost senses of DUTY and PRIDE. A DUTY to respect those who live and work in our society. And a feeling of PRIDE and loyalty towards the nation we live in. Yesterday we launched a petition urging our MPs to cut short their 80-day summer break to pass laws vitally needed to combat terror attacks, a wave of shocking murders, radical rants and politically-correct policing. But there are many other ways our ten million readers can save Britain from bedlam. Try following the ten basic guidelines below – and YOU will be in the vanguard of a drive to rebuild our shattered spirit

And here are the highlights of those guidelines:

4. Britain is a nation at war – we can no longer worry about being labelled a “grass”. Don’t hesitate to REPORT suspicious activity or anti-social behaviour.

5. Ranting clerics are free to spit hatred thanks to the Human Rights Act, which prevents their deportation. WRITE to your MP demanding that this crazy law is repealed.

8. Security and police services face a huge challenge in overcoming the alarming new terrorist threat. Help cops by ensuring you CO-OPERATE fully if you are ever stopped and searched.

10. Soaring levels of apathy have made voting and neighbourhood initiatives unfashionable. Don’t be afraid to PARTICIPATE in them – or even launch them.

Well, there you have it. I find all of the above impossible to argue with, and so have come to a significant crossroads in my life. After years of railing against the Blair government, the Sun newspaper and its proprietor Rupert Murdoch, I finally see that there is no point pissing in the wind. I have been shown the aura of my wees.

Further, Rupert Murdoch and Rebekah Wade have shamed me into action.

I plan to begin my new direction in life by launching a neighbourhood initiative designed to help our overrun police force fight the forces of terror by aiding them in their enforcement of the Serious and Organised Crimes and Police Act 2005. I urge you to participate.

Go into your nearest Rymans and pick up a pack of Security Name Badges.

Download and print the special card that appears to your right. Include your name in the space provided if you so wish, and then cut out and insert this card into the badge-holder.

Copy then paste the following text twice into one page of an A4-sized document (in two columns) and then include two copies of this map from the Home Office (side by side) on another page/document.

Print so the text appears on one side, and the maps on the other.

Print roughly 50 copies of this document, and then cut them in half. This will give you 100 individual double-sided notices complete with map.

Notice of an unauthorised demonstration

We believe that you may be, or are about to be, involved in a demonstration located within an area subject to the provisions of the Serious and Organised Crimes and Police Act 2005. The map on the reverse of this leaflet clearly defines the area concerned.

The demonstration has NOT been authorised in accordance with the requirements of the Serious and Organised Crimes and Police Act 2005 if the police have not been properly notified under the Act.

The purpose of this leaflet is to notify you of these facts, and to advise you that Section 132 Serious and Organised Crimes and Police Act 2005 states that:-

(a) organises a demonstration in a public place in the designated area, or

(b) takes part in a demonstration in a public place in the designated area, or

(c) carries on a demonstration by himself in a public place in the designated area,

Police may arrest any person committing an offence under Section 132 of the Act and if found guilty may be liable to a fine of up to 2500 pounds and/or a term of imprisonment of up to 51 weeks.

You are strongly advised to listen to the directions of the police and to comply with their directions and the wishes of your democratically-elected government.

Attach the badge to your suit pocket or lapel and patrol the designated area within Westminster and environs with your double-sided notices. Stop anyone wearing a t-shirt carrying a political statement or activist bracelet (such as ‘Make Poverty History’) and provide them with a notice, warning them that they may be in breach of the law.

If they refuse to comply with the Act or give you any difficulty, don’t hesitate to report such suspicious activity or anti-social behaviour. Call Crimestoppers anonymously on 0800 555 111.

I plan to begin my first patrol early next week.

6 Responses to "Let’s put GREAT back into BRITAIN – you can do your bit!"