Meet Elena Urlaeva. She is a vocal critic of Islam Karimov (president of Uzbekistan and long-time ally in the global ‘war’ on terror):

Human Rights First – What’s At Stake?: Elena Urlaeva is a human rights activist and member of the Human Rights Society of Uzbekistan who has been a vocal critic of the policies of the Uzbek government for many years. In 2001, she led efforts to defend the rights of individuals who lost their homes to a road-building project. As a result, in April 2001 she was detained and forcibly committed to a psychiatric hospital. International pressure led to her release two months later. But in late 2002, she was again subjected to four months of psychiatric treatment. Urlaeva reported that during both incidences she had been given strong psychiatric drugs. On April 17, 2003, she was arrested and threatened with commitment for a third time after demonstrating in front of the presidential offices.

Even the U.S. Department of State is aware: Authorities released human rights activists Elena Urlaeva in December 2002 and Larissa Vdovina on January 29, both of whom were detained for involuntary psychiatric treatment in 2002. The two women were detained for a number of hours on several occasions during the year in connection with their anti-government protests (see Section 2.b.). Urlaeva continued at year’s end to fight government efforts to have her declared legally incompetent. Vdovina reportedly lost her appeals and left the country. Defendants in trials often claimed that their confessions, on which the prosecution based its cases, were extracted by torture. 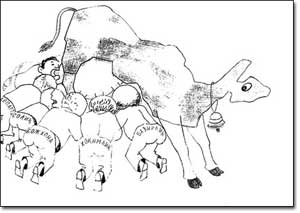 You might be interested to see the kind of thing that gets Elena Urlaeva arrested: Uzbek human rights activist Elena Urlaeva was detained and forcibly committed to a psychiatric institution for distributing this flyer. The cartoon mocks government corruption, portraying well-known officials suckling from a cow that represents Uzbekistan.

And guess what? She’s been detained and forcibly drugged again!

Reuters – Uzbekistan: Psychiatric Drugs Used to Punish Activist: (Tashkent, October 21, 2005) – The Uzbek authorities today subjected one of the country’s prominent human rights defenders to forcible psychiatric treatment even though Uzbek law prohibits compulsory treatment until the appeals process has expired, Human Rights Watch said today. “Using psychiatric treatment to silence Elena Urlaeva is a gross violation of medical ethics and international standards,” said Holly Cartner, Europe and Central Asia director at Human Rights Watch. “It’s shocking that the hospital began the treatment without even waiting for the courts to consider her appeal.”… Powerful antipsychotic drugs were previously forcibly administered to Urlaeva in 2001 and 2002. “Elena Urlaeva is being exposed to drugs that have a potential for serious and permanent side effects,” said Cartner. “The only reason for this treatment is to punish her and silence her for her human rights work.” The Uzbek authorities detained Urlaeva on 27 August and have kept her in forced psychiatric detention since then.

This is the kind of thing they’re trying to silence… Uzbekistan Rewrites the Story of the Andijan Massacre.

And our government is keeping Elmer Fudd about it for two reasons:

1. They like to play the ‘anyone who disagrees with us is a nutter’ game, too (though mostly through the media and without enforced drug use) and one does not like uncomfortable parallels to be drawn

2. They would much rather that Islam Karimov’s version of events won out in the end… because it would make life far, far simpler for everyone on Team Bush

Just in case you’re interested in how they’re playing it, here’s Jack Straw recently praising Uzbekistan for their empty pledge to do away with the death penalty and here’s the government response to forced psychiatric treatment in Uzbekistan via Douglas Alexander in the House of Commons (not Jack Straw, who answered the question previous to this, but a more junior minister you’ll note)… the highlighting is mine:

We made our most recent representation on 14 October. In a diplomatic note, passed by our Embassy in Tashkent to the Uzbek Ministry of Foreign Affairs, we expressed our alarm at the reported treatment of three human rights defenders. One of these was the recently arrested Mukhtabar Tojibaeva; we have requested clarification of the charges brought against her. The Other two were Elena Urlaeva and Shavkat Madumarov. We have asked the Uzbek Government to confirm that all three are being treated in a manner compliant with international standards. We will continue, both bilaterally and through international institutions such as the EU and The Organisation for Security and Co-operation in Europe, to *encourage* Uzbekistan to take *greater steps towards* full respect for human rights, and stand ready to provide any necessary *assistance*.

Would that asking nicely if they’re playing by the rules game be the same one you use when you outsource torture?

Will that assistance include more training for soldiers and shiny new Landrovers for them to hide behind as they shoot innocent protestors?

Is this the same government that puffs out its chest and asks why we seek to deny the Iraqis justice whenever we catch anyone on Team Bush in another crime, lie, failure or murder in Iraq?

UPDATE – Guardian – The bullet holes and bloodstains are gone, but for Uzbeks life is even worse

UPDATE – Reuters – BBC shuts Uzbek office over “intimidation”: The British Broadcasting Corporation’s World Service said on Wednesday it had closed its office in Uzbekistan and withdrawn local staff because of intimidation of its reporters by the authorities. Uzbekistan has cracked down on foreign media since government troops bloodily suppressed an uprising in the town of Andizhan in May, accusing them of inaccurately reporting the violence.

Tim is the sole author of Bloggerheads.
View all posts by Tim Ireland →
This entry was posted in Uzbekistan. Bookmark the permalink.