The trumpet-call had let loose an enormous volume of noise. Already an excited voice was gabbling from the telescreen, but even as it started it was almost drowned by a roar of cheering from outside. The news had run round the streets like magic. He could hear just enough of what was issuing from the telescreen to realize that it had all happened, as he had foreseen; a vast seaborne armada had secretly assembled a sudden blow in the enemy’s rear, the white arrow tearing across the tail of the black. Fragments of triumphant phrases pushed themselves through the din: ‘Vast strategic manoeuvre — perfect co-ordination — utter rout — half a million prisoners — complete demoralization — control of the whole of Africa — bring the war within measurable distance of its end victory — greatest victory in human history — victory, victory, victory!’ – George Orwell – Nineteen Eighty Four

The Sun – You speak and they listen: TORIES out to wreck Tony Blair’s crackdown on terrorists were in turmoil last night – as The Sun’s army of readers rallied behind the PM. A whopping 100,000 of you phoned our hotline to DEMAND 90 days’ detention for terror suspects. Thousands more of you went online – blitzing MPs with emails to SHAME them into backing Mr Blair in tonight’s crunch Commons vote. As you made your voices heard in near-record numbers, senior Tories began to buckle – and Labour rebels started drifting back to the Government side. We urge you to keep the pressure up by phoning the number above. The sensational show of Sun reader power instantly turned the tide in favour of Mr Blair.

Well, after Charles Clarke’s late-night attempt to diffuse the diddled poll row, I think it’s well past time to put this one to bed, too.

Let’s start with the numbers they do give…

A whopping 100,000 of you phoned our hotline to DEMAND 90 days’ detention for terror suspects.

Hm. So we’d best correct that:

Less than 3% of you phoned our hotline to DEMAND 90 days’ detention for terror suspects.

Now, let’s look at the numbers that they almost give…

Thousands more of you went online – blitzing MPs with emails to SHAME them into backing Mr Blair in tonight’s crunch Commons vote.

I didn’t mention this yesterday (because one does not interrupt their enemies when they’re busy making a mistake) but I actually sent my message to ‘wobbly’ MPs to each and every one of the 257 email addresses that the Sun provided, which was based on the list of 299 MPs who voted against the glorification bill.

(They’re short 42 email addresses, but we’ll let that slide; not all MPs have readily-accessible email addresses. Each MP is granted one in the format last-name + first-initial @ parliament.uk, but of course the Sun wanted to be certain that their messages reached their intended target. So they went with published addresses and certainly would have tested these addresses first, right? Erm, no. From of the 257 emails I sent, I received 25 bounces (and 4 ‘out of office’ auto-replies). So that’s 232 presumably valid email addresses. Still, it’s public feeling and intent that matter here, so we can let this slide also and operate with the 257 figure.)

60% of the British population has internet access. You may wish to question this figure given that some people have multiple connections and the Sun targets the working class, so let’s be really, really generous and operate on the assumption that 30% of Sun readers have internet access.

We should probably halve this again, as not all of the Sun readers involved may have been constituents of the MPs involved… but we’re not going to, because a considerable number of emails received by MPs were from people who refused to reveal their address and/or were not from their constituency.

Ah-hah! Did you spot the deliberate mistake? Yes, I just revealed that I’ve been in contact with many of these MPs, not just regarding my message, but the level of response they experienced following the Sun’s campaign (within acceptable boundaries of confidentiality and propriety, of course).

I spoke to seven MPs (or their researchers) about this. Admittedly, that’s a small sample – but they all reported very similar figures and (again) I’ll try to be as generous as possible with my figures in order to allow for variations I may not be aware of.

These MPs received between 1-4 emails as a result of this call to arms. Counting mine. But I promised to be generous, so let’s operate on an average of 6 emails per MP:

Thousands more of you went online – blitzing MPs with emails to SHAME them into backing Mr Blair in tonight’s crunch Commons vote.

*Hundreds* more of you went online – blitzing MPs with emails to SHAME them into backing Mr Blair in tonight’s crunch Commons vote.

Again, I’m trying very hard to be fair here. The sentence initially refers to readers ‘going online’, so perhaps they’ve based their figure on the number of people who downloaded their list of shame. We have a number of variants here, including an unknown number of visitors who would have followed this link from Bloggerheads, and many Sun readers who may have downloaded the page only to see that their MP was not listed, but let’s continue the spirit of generosity and double the 1,542 figure. This gives us 3,084 Sun readers with a clear intention to email their MP (or perhaps somebody else’s MP).

Finally we’re at a stage where we can rightly use the word ‘thousands’ and not ‘hundreds’ to describe the figure… but what happens when we apply this figure to the (greatly under-estimated) number of Sun readers with internet access?

Not even *half* of a single percentage point.

This is not what I would call a blitz. It’s more like a blip.

Let’s go back to the Sun for more:

As you made your voices heard in near-record numbers, senior Tories began to buckle – and Labour rebels started drifting back to the Government side. We urge you to keep the pressure up by phoning the number above. The sensational show of Sun reader power instantly turned the tide in favour of Mr Blair.

‘Near-record numbers’ may not be a lie. I’ve crunched numbers in this way before, and the Sun plays this game a lot. Perhaps, for them, this *is* a record response.

The rest… well, they look to be making things up to impress us, but you can’t really blame them for that, given the shocking complacency of their readers. After all….

97% of Sun readers either do not support the proposed 90-day law, or could not give a rat’s arse either way. 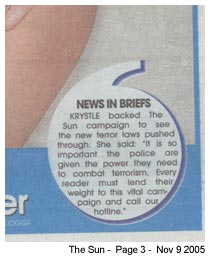 Perhaps it is this complacency that finally convinced them to bring out the Big Guns.

Yes folks, it’s time for yet another Page 3 editorial!

Today Krystle (23, from Manchester) ‘backed the Sun campaign to see the new terror laws pushed through’. She says: “It is so important the police are given the power they need to combat terrorism. Every reader must lend their weight to this vital campaign and call our hotline.”

Yes, by all means, call the hotline. Please stop emailing MPs, because – let’s be frank – it’s getting embarrassing.

If MPs got wind of this – if they put 2 + 2 together – well, it just doesn’t bear thinking about.

This is a poll of Sun readers, not the general population.

The Sun has backed Blair and his cold-hearted manipulation of terrorist atrocities since Day One.

Even when victims of terrorism are waved in their face, 97% of these readers do not support this draconian legislation enough to make a simple phone call.

So please, please do what the girl with the boobs says and call that hotline so that tomorrow, after the vote has taken place, the Sun can publish these new figures and… erm… hang on… something’s not right here…

UPDATE – Make that *eight* MPs I’ve spoken to about this. I have permission to quote this response verbatim; it was sent *before* this particular MP read my latest post…

Rt Hon James Arbuthnot: I have, as a result of the Sun’s list, received more e-mails supporting my view than opposing it.

Tim is the sole author of Bloggerheads.
View all posts by Tim Ireland →
This entry was posted in Page 3 - News in Briefs, Rupert 'The Evil One' Murdoch, The War on Stupid, Tony 'King Blair. Bookmark the permalink.