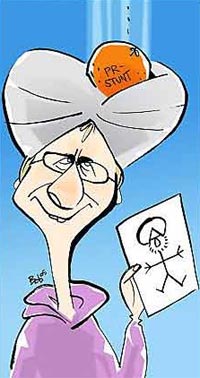 Guardian – Anger as papers reprint cartoons of Muhammad:
Newspapers in France, Germany, Spain and Italy yesterday reprinted caricatures of the prophet Muhammad, escalating a row over freedom of expression which has caused protest across the Middle East. France Soir and Germany’s Die Welt published cartoons which first appeared in a Danish newspaper, although the French paper later apologised and apparently sacked its managing editor. The cartoons include one showing a bearded Muhammad with a bomb fizzing out of his turban.

Stephen Bates: (But) what we cannot have, according to tradition, is a graven image. There is no explicit ban in the Qur’an, but to picture him would be to annexe God’s creative power and to attempt to depict the sublime. No human being, one correspondent told the writer Malise Ruthven, can ever depict the beauty and grandeur of his countenance.

Which leads us into the whole issue of idolatry (which us Christian folk neatly stepped around with an icon or two).

Leerdammer has some examples of the cartoons here.

This wider collections shows that some include commentary by cartoonists on the exercise itself (one of which I’ve included here on the right because it’s my very favourite).

There’s lots of discussion over at Media Watch Watch, which leads us to the question; how different is this to the Jerry Springer: The Opera issue? (Note – There’s more, but onto that in a mo.)

Well, the big difference appears to be as follows:

Christian activists extremists had to do a lot of lying, leading and spinning in order to portray JS:TO as deliberately offensive/provocative… but I would argue that the cartoons in this collection that equate Islam with terror live up to this description without the need for intensive fact-massage.

To state or suggest that Muslim=terrorist is a grossly irresponsible – and incorrect – thing to do. (Strange; I’ve just had the most extraordinary sense of deja vu.)

Discussions on the basis of this god, that god, a god or The God don’t even enter into it.

In fact, I think what we have here is an important precedent in the ongoing Free Speech Vs. Yelling ‘Fire!’ debate… and here to help prove that is this charming fellow who chooses two ‘terror and sword’ cartoons from the collection to headline his ‘Home for Muslim offensive art!’ (NSFW).

With *that* said and noted, now we can go back to the Media Watch Watch post, which says: Meanwhile, Danish Muslim leaders who have been touring the world explaining how offensive the cartoons are have actually added three cartoons to the original twelve: one depicting Mohammed as a paedophile demon, one of him with the snout of a pig, and another of a praying Muslim being sodomised by a dog. The origin of the extra three cartoons is unknown, but they are sure to stir up a bit of hatred. Which, of course, is the whole point.

Think about it; you equate this faith with terrorism, which prompts confusion and anger from those who belong to it… this then allows those who wish to enforce the Muslim=terrorist message to point their grubby fingers and yell; “Y’see! The religion of peace strikes again!” as extremists from the other side…. Gah! Can I stop looking now, please?

It’s not big, and it’s not clever… and you really have to ask yourself if there aren’t two sets of bullies on the warpath here.

Slinging Ink has a call to bloggers here, asking you to reproduce and share the cartoons, and even includes some Jehovah and Jesus jokes for balance.

Hm. I’m not so sure that this is a good idea, but I totally agree on the idea of balance, and I think I have just the cartoon for those who may wish to address matters of free speech and blasphemy, but at the same time distance themselves from extremists on either side:

Ladies and gentlemen, please put your hands together welcome to the stage… Mr Gary Larson.

UPDATE – I’d like to second this from the Disillusioned kid: If any of you are looking for a simplistic black and white response to this controversy I’m afraid you’ll be sorely disappointed. (I’m sure you’ll be able to find plenty of them elsewhere, mind.) Our mission (should we chose to accept it) is to defend freedom of speech while doing everything we can to scupper the plans of those who would abuse it to peddle their racist dross. Same as ever really.

(Sorry Atopian, I know there’s a fight to be fought, but I reserve my right to prioritise strategically and address the source of any given fire.)

Tim is the sole author of Bloggerheads.
View all posts by Tim Ireland →
This entry was posted in Tolerance. Bookmark the permalink.

6 Responses to "The Muhammad Cartoons"