It’s [almost] 10 years to the day since Tony Blair first walked into Downing Street with the help of that lovely man Rupert Murdoch. And here is today’s news:

Independent – Blair’s bloody legacy: Iraq: On the 10th anniversary of Tony Blair’s election as Prime Minister, an exclusive poll reveals 69 per cent of Britons believe that, when he leaves office, his enduring legacy will be the bloody conflict in Iraq.

Independent – Revealed: how London bombers slipped through MI5’s grasp: As mainland Britain’s longest-running terror trial finally came to an end, the success of police and the security services in smashing an al-Qa’ida plot to bring carnage to Britain was overshadowed by the disclosure that MI5 also missed several opportunities to identify Mohammed Siddique Khan, the leader of the London suicide bombers.

Guardian – July 7 victims deliver inquiry demand: Survivors of and relatives of those killed in the July 7 terror attacks today delivered a letter to the Home Office calling for an “independent and impartial public inquiry” into the attack. The letter, addressed to the home secretary, John Reid, called for a wide-ranging investigation into the communication between government, police and the security service. The move, by the 7/7 Inquiry Group, came a day after it was revealed that MI5 had come across July 7 ringleader Mohammed Sidique Khan and his right-hand man Shehzad Tanweer while investigating another group of plotters but let them slip through the net.

And now, here is today’s news from the primary propaganda outlet of the Blair/Murdoch dream team:

TEN years ago today, Britain overwhelmingly put its faith in a young politician to guide our nation into a new era. And despite all the moaning, Tony Blair is entitled to feel pride today at his historic decade as Labour PM. Three times the Tories have tried to beat him. Three times they failed. After ten years at No10, Blair is one of the world’s senior statesmen. At home, however much has gone wrong, he has kept his pledge to provide massive extra funding for the NHS and schools. His government has delivered 58 quarters of unbroken economic growth, low inflation, the minimum wage and millions of new jobs. In Northern Ireland, which for so long defeated politicians of every party, the PM is about to seal what looks like permanent peace. And, despite Iraq, he can claim moral victories abroad in Kosovo, Sierra Leone and Afghanistan. No leader expects total success. Blair has admitted that some things have gone wrong – things he knows should have gone better. But despite looming defeats in Thursday’s elections, he should raise a glass in quiet celebration. As Gordon Brown writes of today in a remarkable personal tribute to Blair, their own inevitable personal ups and downs should never be allowed to disguise their comradeship and pride in Labour. Sometimes it’s too easy to knock politicians without sufficiently appreciating that a man like Blair has dedicated his life to serving his country – 24 hours a day, seven days a week, for ten gruelling years. If the boyish grin of May 1 1997 has been replaced by greying hair, is it any surprise? When you look at the burdens a PM has to carry, it seems a miracle that anyone wants to take it on. Now it looks like Gordon’s turn to take the strain. His first duty should be to buy Blair a drink. He has earned it.

IT would be nice to think we can sleep easier after putting five al-Qaeda bomb plotters behind bars for decades. But there are plenty more where they came from here in our midst. Hundreds of al-Qaeda cells are planning attacks and grooming suicide bombers. MI5 is stretched to the limit tracking at least 2,000 known extremists in Britain. The lesson from yesterday’s verdict is clear, and we cannot ignore it. Britain must now move much more quickly and firmly to clamp down on Muslim hotheads ranting on our streets to attract new recruits. We cannot wait until London or Manchester is blown to bits before acting to protect the British people.

The only hint of criticism? Two words; ‘despite Iraq’…. which is somewhat overshadowed by a repeat of the all-too-familiar assurance that we had best start appreciating this regime and stop asking difficult questions lest we all get blowed up.

Amusingly, they also bring two boobs out for some ‘united front’ propaganda on Page 3… and yet place the information down by the panties to tell those ‘in the know’ that it’s really a pile of knickers: 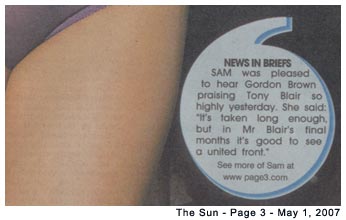 UPDATE – More from Rachel (who has had a very busy day).

Tim is the sole author of Bloggerheads.
View all posts by Tim Ireland →
This entry was posted in Page 3 - News in Briefs, Rupert 'The Evil One' Murdoch, Tony 'King Blair. Bookmark the permalink.

3 Responses to "Celebrating 10 years of the Downing Street Echo"