It’s finished… and just in time.

My submission to the Home Office in response to the Government’s consultation document on Sections 132 to 138 of the Serious Organised Crime and Police Act 2005 is a slide show in video format and appears below along with the email sent to the Home Office and a full transcript (complete with linky goodness in key places for newbies).

In short, the entire submission has been made available to the public.

Grab yourself a coffee or a nice hot cup of tea and settle in for a little over 7 minutes of me sharing a few things the Home Office – and you – should be aware of:

SOCPA (a submission to the Home Office)

To: The Home Office
From: Tim Ireland
Subject: My submission to the public consultation on SOCPA

As you may or may not be aware, I am one of those people who will take every opportunity he can get to embarrass the government over the many absurdities of Sections 132 – 138 of the Serious Organised Crime and Police Act 2005.

In fact, if it weren’t for this Act, I would be spending a lot less time giving you a hard time.

Happily, at the moment, you are being paid to listen to me… so I beg your kind attention for a mere 7 minutes and 39 seconds.

My submission is in the form of a video slide show that is also available to the public:
http://www.youtube.com/watch?v=cACSwlqV0GA

A transcript will be made generally available at the following address…
https://www.bloggerheads.com/archives/2008/01/my_socpa_submission.asp

… but I would prefer that you took the time to watch the video presentation:
http://www.youtube.com/watch?v=cACSwlqV0GA

I’ve been cheeky enough to appeal to your instinct for self-preservation, just in case the many dangers and absurdities of this law fail to have the impact they should, but there is also one very important point that I wish to raise most, and it is contained within the following appeal…

[The final paragraph of this letter is only available at the end of the video slide show.]

(Video transcript is below the fold.)

UPDATE – How rude of me. Special mention should go to the tireless efforts of Brian Haw and the genius/persistence of Mark Thomas. I thank them both.

[<--------- fold ---------->]VIDEO SLIDE SHOW TRANSCRIPTThe following is my submission to the Home Office consultation on the subject of the sections of the Serious Organised Crime and Police Act covering demonstrations near Parliament.My advice to you, if you’ll pardon the vernacular, is that you cannot polish a turd.It is my intention to convince you that these sections of the Act should not be modified or ‘harmonised’, but instead repealed… because it’s such a remarkable mess that it makes you look authoritarian and stupid.The public were fed many questionable justifications for Sections 132 – 138 of SOCPA. Two of the most entertaining came from the Conservative MP Sir George Young:1. Referring to Brian Haw’s long-standing protest, he had this to say in Parliament about the need for this law in light of the looming terrorist threat:

“The flags and the placards are right opposite the gates into New Palace Yard. Anyone could hide behind that cover and pick us off as we arrive at or leave the House.” (source)

Translation: this protest must be outlawed because it’s helping the terrorists.See? Authoritarian and stupid.2. Again referring to Brian Haw and his supporters, he said this:

“No other democracy would tolerate this shantytown in the middle of the capital for three years.” (source)

Sir George Young appears to be unaware of the Aboriginal Tent Embassy in Canberra, Australia. Established in 1972, and still there 36 years later.Again, authoritarian and stupid.By now you may have noticed some degree of focus on Brian Haw.But let’s be honest with ourselves here… the only reason this Act made it through Parliament in the first place was because the majority of MPs who voted for it (or stood by and allowed it to cruise through) wanted to get rid of this constant reminder of our less-than-ethical foreign policy.There is also some uncertainty about the law and how (or indeed if) it applies to MPs. The rights of constituents to lobby their MP were discussed during the relevant debates but, remarkably, not incorporated into the Act.This leaves us with an extraordinary situation where MPs who participate in a demonstration are technically breaking the law (that they themselves allowed through Parliament), but they can do so without fear because they know that the police know that any attempted prosecution can be blocked via an appeal to the Attorney General.Here’s my MP, Anne Milton, breaking the law. 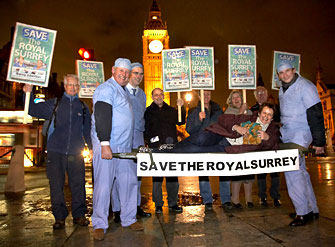 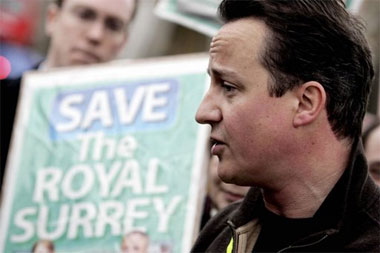 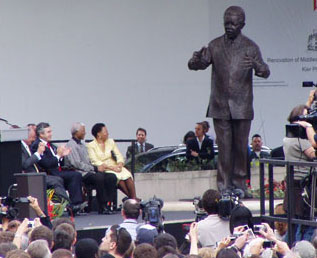 Here, you can clearly see that the man on the right (a Labour MP) is operating a loudspeaker. The man of the left (a member of the great unwashed) is merely holding it. 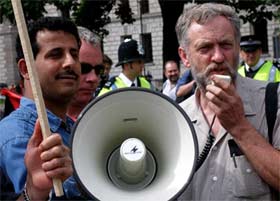 Who did the police arrest?Well, certainly not the MP.However, it turns out to be a good thing that MPs are unofficially exempt, as the law also fails to define what constitutes a demonstration.Without the protection of the Attorney General an MP could, for example, be arrested and prosecuted for expressing an opinion during an interview on College Green.Or even for demonstrating their ignorance in the House of Commons.Like I said… authoritarian and stupid. But let’s take a closer look at the law’s failure to define what constitutes a demonstration, because this is where it gets really, really stupid.Because the law does not say what does and does not count as a demonstration, it is left up to the police decide how and where the law should apply.This has led to several inconsistencies and, inevitably, an increasingly politicised police force.Take for example this excerpt from a phone call made to the police from someone wondering exactly what does and doesn’t require permission:

Do I really need to say it?But wait… it gets better:In 2005, a carol service was organised in Parliament Square in direct defiance of the law.Was it resulting media interest that forced the police to back down and announce that this demonstration didn’t count as a demonstration?Sorry, but no. The next year, the same event was held with much less fanfare, and again the police decided that it did not count as a demonstration.But in 2007, the exact same event was staged again with one small difference… instead of singing for Christmas, carollers sang against it.The result? The police decided that this *did* count as a demonstration.So, that’s…Demonstrating in favour of Christmas:Legal without police permissionDemonstrating against Christmas:Not legal without police permissionAuthoritarian. Stupid. And just a little bit festive.These and other decisions by the police would appear to suggest that they are constantly confusing the word ‘demonstration’ with the commonly-understood definition of the word ‘protest’.One can only assume that this means anyone can stage a demonstration without permission in the designated area simply by changing the message from a negative one into a positive one. Here’s an example using simple placards to help you to understand this concept:

On the subject of placards and other displays, there also appears to be some uncertainty about size.For instance, I applied for permission to wear a red poppy to raise awareness of the Poppy Appeal, but the police informed me that permission was not required because this was “not considered to be a demonstration”And yet at the same time, they decided that Mark Thomas *did* require police approval to hold a *banner* to raise awareness the Poppy Appeal.One might be tempted to put a series of applications in to determine once and for all what the minimum size requirement is for any visible indication that a demonstration is actually taking place, if it weren’t for the following:Mark Thomas was also informed that he would require police permission to wear a red nose in support of Comic Relief.But a red nose and a red poppy are roughly the same size.Oh, and the police decided not to take any action over the display – without permission – of a red nose within the designated area that was 135m high and 121m wide.Neither did they arrest any of [the] celebrities who turned out to demonstrate in favour of Comic Relief within the designated area without permission.(Though perhaps things would have been different had they turned out to demonstrate *against* Comic Relief.)One more time for the dummies:Authoritarian and stupid.As voting for the act shows [1, 2], this law was passed primarily by Labour MPs operating under Blairite whips keen to bury the legacy of Iraq without further pesky intervention from the public.And those days are over, yes?After all, the first positive headline for Gordon Brown during the week of Tony Blair’s departure was this one:The Times – Brown to allow Iraq protests: Gordon Brown s to make a symbolic gesture to critics of the Iraq war by allowing antiwar protesters to demonstrate and march outside parliament. This will reverse legislation introduced by Tony Blair two years ago to restrict the rights of people to camp on Parliament Square and install banners criticising the government.So it’s my view that the most positive thing you can do for the health of our democracy and the image of your government is to repeal those sections of the Act relating to demonstrations near Parliament.To reiterate, you cannot polish a turd.The wisest course of action is to flush it. And then wash your hands thoroughly.I thank you for your time.END TRANSCRIPT