10 reasons not to trust Nadine Dorries

This entry was posted on
Thursday, May 8th, 2008 at
4:46 pm and is filed
under The Political Weblog Movement.

Please excuse the mind-dump, which is untidy in places. Wading through Nadine’s bullshit gives me a headache at the best of times, but I needed to get all of this out of my head before starting on a fresh slapping of this stupid, deceitful woman:

1. She presents myths as facts:

The clearest example of this is her use of the ‘Hand of Hope’ myth which – even after a thorough debunking (that she described as “an amazing response”) – she still uses as the lead item in the ‘pictures and video’ section of ‘her’ campaign website. It’s worth looking closely at this one, as Nadine’s apparent belief in this myth now relies on her belief that militant pro-lifers made the surgeon change his story about a foetus capable of punching through human flesh. You can find more here and here.

2. She refuses to be held accountable for her lies ‘mistakes’:

In late 2007, Nadine Dorries aimed a false accusation at Dr Ben Goldacre. Instead of facing up to the many comments in defence of Dr Goldacre (and simple common sense) she simply stopped accepting comments on her ‘blog’ (more)… and then had the temerity to play the victim!

3. She has no bloody idea what she’s doing most of the time:

The above incident showed that Dorries is ignorant of parliamentary procedure, but there’s an even more recent example of her ignorance; this week, Nadine staged her first ever press conference (bless!) but was surprised to learn that in most cases filming is not allowed in the Palace of Westminster without permission (note: in most cases). And, as with the Goldacre matter, she went on the offensive and had a full-on rant over an issue she knows sweet bugger all about. Because she’s as vindictive as she is ignorant.

And, when she was forced to relocate her press conference to College Green, she was shocked to discover that she needed a permit there, too (and permission under SOCPA). To get her way and get her face on camera, she lied… outright and without shame:

“As it was we de-camped onto College Green. Within seconds another security guard arrived. He asked me did I have a permit? I said yes. I lied, we began. Perhaps someone would now like to report me to the standards committee?” – Nadine Dorries (07 May)

I’ve used this rather benign example because (a) here she admits it and (b) all of the other times she might be called a liar (example), one cannot rule out her instead being understandably mistaken because she is so impossibly stupid.

5. She claims to be a blogger when she is not:

The permalinks don’t work in most browsers, she no longer accepts comments; let’s face it people, this is not a blog. And it’s nowhere near as popular or successful as Nadine makes out…

6. She misrepresents passing mentions as awards:

Dorries once issued a press release claiming that she had been named ‘princess of the blogs’ by the British Computer Society. Anyone reading that press release or seeing the big button on her website might have got the impression that Nadine had actually won an award or even the competition overall, when this simply wasn’t the case. She even went so far as to state that hers was “one of just three MP’s websites to be highly commended” while completely failing to mention that 11 other MPs, instead of being ‘highly commended’ had to make do with being finalists and/or actually winning awards. 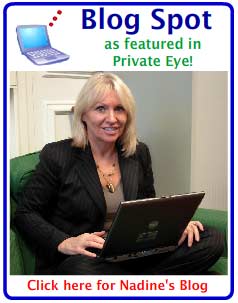 Nadine has been running another promotional button on her website, and you can see a grab of it to your right. It’s enormous, it’s on the front page and it’s complete and utter bulldust. “As featured in Private Eye” might suggest to more trusting readers that Private Eye had run a positive or flattering feature on her ‘blog’, when in fact they had run a small item (following what can only be described as a rant about that magazine on her site in Nov 06) that read; “Mad Nad appears to be getting even madder”… and “she shrieks on her blog”. It did at one stage say that “the Dorries blog is full of delights”, but the delights they mentioned were her inability to recall the name of the first woman MP and her interest in “hunky personal bodyguards”. They closed by responding to a dark/vague threat (Nadine’s great at these) by asking; “What can the old fruitbat mean?”

Nadine responded (in Dec 06) by thanking them for traffic and claiming to have more readers. Later, when all the fuss had died down, she re-ran events according to her own version of reality and the illusion of an endorsement was born.

She is a piece of work, isn’t she?

8. Even the Daily Mail is embarrassed by her bullshit:

9. Even those who support her campaign’s aims are embarrassed by her bullshit:

Dr Crippen wishes she could be more honest about the abortion debate and her position on abortion.

(Note for regulars: and he manages this with the handicap of generally taking Iain Dale at his word.)

Yes, I know that’s only 9, but like I said, this is just a mind-dump and there’s a fresh item on the way…

Tim is the sole author of Bloggerheads.
View all posts by Tim Ireland →
This entry was posted in The Political Weblog Movement. Bookmark the permalink.

9 Responses to "10 reasons not to trust Nadine Dorries"