Julie Moult is an idiot

This entry was posted on
Wednesday, August 27th, 2008 at
12:52 pm and is filed
under Old Media, Photoshopping, The War on Stupid.

[UPDATE (03 Sep) – Exciting new link! –> The Daily Mail: let’s kick arse and take names! <-- Check it out for my reponse to the Daily Mail's response to this article. Cheers all.]

What have I got against Julie Moult?

Well, looking into some of the hateful and (ahem) inventive crap she’s produced for The Sun and The Daily Mail over the years, quite a lot… but really, I’m here today to deliver to Julie a well-earned lesson on the mysterious inner workings of Google:

She would prefer to be known for her trailblazing policies on eco-friendly housing and community cohesion.

But if the billions of people using Google decide to look for Labour MP Hazel Blears by typing her name into the search engine, a more unlikely image appears.

The first site you reach features a mock-up 1950s movie poster of the politician in a skimpy outfit.

Last night, the prank raised the possibility that she was the victim of ‘Google Bombing’, when internet enthusiasts manipulate rankings on search engines….

He said: ‘Hazel is supremely relaxed about this. This is just part of the fun of the internet.’

Google yesterday denied the politicians had been subjected to Google Bombing, saying the picture’s ranking was due to several factors including popularity.

Google Bombing, when cyber pranksters create dozens, or even hundreds, of ‘fake’ sites linked to the targeted webpage to make it seem more popular, is something politicians around the world are all too familiar with.

1. Hazel Blears’ office isn’t bothered about the ‘stunt’ (which isn’t a stunt), but Julie must have her summer story, so she marches on regardless.

2. Google informs her that it’s not a Google bomb (I prefer ‘Googlebomb’ myself, but nevermind) but in Julie’s eyes this is merely a ‘denial’… and so she marches on again. Without pausing for breath.

3. Even if this were Google bombing (it isn’t), and even if high profile Google bombs still worked (they don’t), the most effective Google bombs involved genuine web users expressing genuine opinions on genuine websites; they would each stake a fraction of the reputation they had earned online on their opinion that George W. Bush is a miserable failure, Tony Blair is a liar, and/or John Prescott is a f**kwit. They would do this by linking to a target website with the required word(s), thereby as a group making it a top search result for a word or words that (usually) did not even appear on the target page.

4. Speaking of that f**kwit John Prescott, I’m a photoshopper and I created an image that is one of the top Google Image search results for his name. It became a top search result because it is an amusing and relevant* image with a relevant filename, hosted on a well-regarded and relevant website (backingblair.co.uk) and it has remained there through many image database updates because people think it is funny (and relevant) and keep linking to it.

5. Beau Bo d’Or, who created the image that Julie Moult is fussing about (and the Daily Mail is using without permission), is – I am not ashamed to say – a better and cleverer photoshopper than I am. He is highly regarded, and his work featured at the online art community site b3ta.com or his own website at bbdo.co.uk (+ heady.co.uk) is highly regarded and regularly linked to.

6. It is the combination of this reputation (based on general interest in past efforts plus specific interest in this single relevant* effort) and a simple, relevant filename that has Beau Bo d’Or in control of not one but two top Google Image search results for the query ‘hazel blears’.

What Julie Moult is describing is – for the most part – sock-puppeting and astroturfing, but that doesn’t have anything to do with Beau Bo d’Or’s image being the top search result for ‘hazel blears’, either.

(*John Prescott is a very sexy man in much the same way that Hazel Blears is a very tall woman. Both images are relevant to their respective queries… and in a very similar way.)

To help Julie understand how Google works, I have used her name in the title of my article, and in the article itself.

I confidently predict that – because of the relevance of the entry and the reputation that Bloggerheads has earned over the years, that my single article about her will become one of the top search results in Google UK for her name (if not *the* top search result) within a couple of hours.

Getting a result in Google Images will take a little longer (as in weeks longer) because the Images database isn’t updated quite as often as the main one, but I’m confident that I can get at least one image into the top row, simply by giving it a suitable name and including it here: 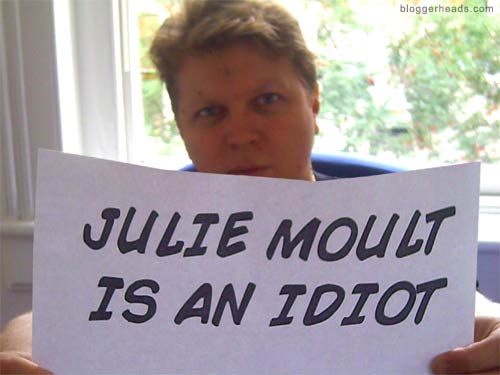 In fact, I think with a quiet word to my readers and a few other web users, I could easily have the entire front page for ‘julie moult’ in Google Images filled with images telling the world that Julie Moult is an idiot… and if she thinks really, really hard about it, she might just begin to understand that what enables/powers the eventual result isn’t magic or trickery, but instead Google detecting a genuine public response to my appeal and her own damn articles:

It is my considered opinion that Julie Moult is an idiot.

She doesn’t know or care how Google works, even when the people from Google explain it to her, but that’s just the tip of the iceberg.

Julie Moult was also behind a dangerous claim of “Muslim yobs” attacking soldiers returning from Afghanistan that turned out to be totally without foundation (see follow-ups here and here).

I could go on (and on and on), but I’m confident that the above and her article about “Nazi racoons” will be enough for most people.

You may wish to read more before forming an opinion of your own, and I totally respect that. Feel free to browse through Julie Moult’s many articles in The Sun and The Daily Mail for any redeeming acts/articles (such as her selfless service in search of little Maddie McCann).

Once you’re done and you have arrived at your opinion, I’d like you to take the following steps:

Step One – Create an image featuring the words “Julie Moult is an idiot” (or “Julie Moult is not an idiot, but instead a much-misunderstood campaigner for truth and a very nice person once you get to know her”).

Step Two – Include the words ‘julie’ and ‘moult’ in the filename for your image.

Step Three – Publish it on your website or weblog in a post explaining what it is and why it’s there (including, if you like, these steps and a link back to this article).

Step Four (optional) – If you really mean business, put her name in your article title and maybe even drop in some ‘ALT’ or ‘Title’ goodness for your image.

:: Please keep in mind that Julie Moult might be willing and able to sue you if she can prove that she isn’t an idiot (though I’m quietly confident that this won’t be a problem).

:: You may also wish to include a picture/glimpse of yourself in your image, as I have (above), so Julie is certain that real people, not invisible Google pixies, lurk behind the eventual results.

Notable search results will be posted below as soon as they start appearing, and a prize will be awarded for the best relevant performance in Google Images (not including mine).

Good luck to you all. I hope to see you in the top row soon.

[Note to participants: Stay tuned for an upcoming post about The Prize Shelf. It’s chock full of goodies for young and old.]

[Note to Julie Moult and the Daily Mail: Just so you’re aware that your notoriously self-serving comment moderation policy does have its hidden costs; normally you lot wouldn’t be worth the time and effort, but your ignoring/deleting my quite reasonable comment response to your article annoyed me just long enough for this idea to take shape. There, now aren’t you glad that you censored a polite comment pointing out an obvious flaw?]

[UPDATE (03 Sep) – Exciting new link! –> The Daily Mail: let’s kick arse and take names! <-- Check it out for my reponse to the Daily Mail's response to this article. Cheers all.]

Tim is the sole author of Bloggerheads.
View all posts by Tim Ireland →
This entry was posted in Old Media, Photoshopping, The War on Stupid. Bookmark the permalink.

30 Responses to "Julie Moult is an idiot"