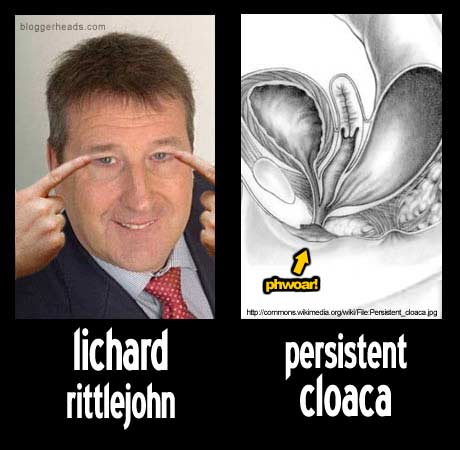 I would like you to consider choosing (and using) the word ‘cloaca’ ahead/instead of ‘cunt’ in your written communications on the internets and in the Twitters.

I will begin by outlining the deficiencies of ‘cunt’ as a useful word in mainstream discussion, and then go on to point out the qualities of ‘cloaca’ that make it a worthy replacement. Please bear with me through a few swears:

I have an anus that follows me everywhere and there’s no question about my being attached to it, but use of the word ‘arsehole’ as abuse does not offend me as an anus-owner, as it should not offend you.

I personally don’t feel violated in any way when people use ‘prick’, ‘cock’ or ‘dick’ as a form of abuse, even though I own a penis and am quite fond of it. I can see how a woman using one of those terms to attack me purely on the basis of my gender might offend me, but it would be foolish to read this into every use.

Therefore, even though I don’t own one, I have in the past deemed it appropriate to describe another person as a ‘cunt’ (and not in a nice way).

However, I think there is an inequality at work here that unfairly places ‘cunt’ at the top of the anatomy-based abuse index:

In this sense, ‘cunt’ is potentially offensive to all women. Not through the general use of the word, even as most forms of abuse, but through its placement at the top of the body-part chart. Should a word for female genitalia really be the most offensive thing you can call someone?

I’m sure we can better progress as a species without this kind of inequality, and I would like you to consider using the word ‘cloaca’ in place of ‘cunt’ as part of your recommended daily allowance of abuse.

If you still have trouble understanding/appreciating why you should do this, ask yourself who really wins when you call a notorious woman-hater like Richard Littlejohn a ‘cunt*’.

[*Poetry Corner: A lot of people have said it; yes, including me. But it was said well and said best when said by Stewart Lee.]

Why ‘cloaca’ is a worthy replacement

Richard Littlejohn is also your path to understanding why ‘cloaca’ is my chosen replacement:

In zoological anatomy, a cloaca is the posterior opening that serves as the only such opening for the intestinal, reproductive, and urinary tracts of certain animal species. The word comes from Latin, and means sewer. All birds, reptiles, and amphibians possess this orifice, from which they excrete both urine and faeces, unlike placental mammals, which possess two separate orifices for evacuation. (source)

See? Like Richard Littlejohn, a cloaca is a cunt, and an arsehole, and a pisshole (and sometimes even more)… all at the same time!

To my mind, there is no question about its rightful place at the top of the chart:

There are other benefits, too:

a) Even if cloaca-owning critters could read, there would be no risk of offence; the decision to favour a multi-purpose orifice is entirely logical and does not unfairly single out or denigrate birds, reptiles, amphibians or monotremes. Plus, it should be pointed out that (some) humans have cloacas, too.

b) ‘Cloaca’ is not a widely-known word, and there is often a goatse-like aspect to its use that should delight the enlightened communicator. For example; if this word were directly neatly at the right target** they might never look at eggs in quite the same way again. Any bystanders to the conversation may also be educated about biology to some extent as a result – and left in no question about your meaning and/or the depth of your feeling – but, importantly, they will not be personally offended or wounded on a gender/inequality level.

[**Vegans may wish to avoid its use as abuse when confronting omnivores, as this may be interpreted as a deliberate attempt to spoil their breakfast(s).]

c) ‘Cloaca’ will sail through most swear filters and pass most ‘SFW’ tests. Unless you drag a chicken into the office and wave it in the boss’s face to make your point, in which case you’re on your own.

d) The latin origins of ‘cloaca’ couldn’t be more perfect for its intended use on the internets; we have enough shit to deal with, and every fresh outlet of pure sewage is to be discouraged.

Now, we’ve had some laughs, but I am serious about this, and to show my dedication to this proposal and further spread the gospel, I have decided to make Richard Littlejohn some if not many of the top/main search results for ‘cloaca’ in Google Images***. (I am hoping that people will instinctively pick up on my point, or eventually come to see things my way.)

In summary: using ‘cloaca’ in place of ‘cunt’

It really is very simple; I would like you to buck the trend and sacrifice an extra letter [two extra letters. duh.] the next time you’re tempted to call someone a ‘cunt’, and use ‘cloaca’ instead.

Linking to this post from time to time (or using the http://bit.ly/Cloaca link or the #cloaca hashtag in Twitter) will reassure your followers that it’s a brave stand for equality, and nothing against their budgie.

[Psst! If you’re a media-watch blogger and have a strong view and some relevant evidence about Richard Littlejohn that you’d like to share, you can help with the Google Images malarkey. Just drop me a line in the Twitters and I’ll clue you in.]

Tim is the sole author of Bloggerheads.
View all posts by Tim Ireland →
This entry was posted in Old Media, Teh Interwebs. Bookmark the permalink.