[Please be aware that this post contains a graphic image of in utero surgery. If you are so inclined you can learn more about the original here. ‘NSFW’ may not be the proper tag, but please do approach the ‘Hand of Hope’ with similar caution if linking to it and/or to this post; not everyone has a stomach for surgery.]

If you’re new here, this is probably your best introduction to Nadine Dorries, as this single matter not only shows Nadine at her very best medically, but also serves as an excellent introduction to the type of conduct that makes her unfit to serve as a Member of Parliament.

I’ll let Nadine introduce herself, and then we’ll crack on.

“I am aware that in laying down this amendment there will be those who will attempt to misrepresent my position. The fact is that I am pro-woman. ” – Nadine Dorries (source | mirror)

The great sage Dorries (who has foretold stabbings, you know) predicts she is about to be ‘misrepresented’. Tragically, she may actually believe this.

She then declares herself ‘pro-woman’ in order to distinguish herself from deeply religious people (i.e. people like her secretive backers), much like she declared the ‘charity’ Forsaken to be “pro women” (i.e. and not “pro life”) in the House of Commons. This group turned out to have a deeply religious agenda. Dorries’ only answer to this at the time (and since); a series of outright lies about the way I dared to scrutinise this claim and what she had clearly implied about the organisation’s size, credibility, and charity status.

Back to Nadine, the day after:

“As I predicted, those who wish to mis represent my position on abortion came out yesterday in an attempt to both discredit me and therefore undermine both the issue itself and the case of vulnerable women” – Nadine Dorries (source | mirror)

Classy the way she shields herself with vulnerable women, isn’t it?

That aside, if anybody had ‘mis represented’ her position on abortion, she’d be sure to challenge their fictions head-on, right?

Dorries first published this as a comment under the original article at ConservativeHome. Soon after I responded, the site owner Tim Montgomerie (staunch Christian and close friend of Dorries) deleted my comment that consisted of (a) this recent claim from Dorries and (b) this earlier claim by Dorries on her website which clearly contradicts her;

“My second point is look at the tear in the uterus. See how jiggered it is just above the hand; and yet the rest of the surgically incised openings are controlled and neat. This is, in all likelihood, because the hand unexpectedly thrust out.” – Nadine Dorries (source | mirror | dumbfounded blogger 1 | dumbfounded blogger 2)

[MINI-UPDATE – Psst! After deleting my comment, Tim Montgomerie had the cheek to publish a comment that implied my content (that only he could see) was somehow “nasty” or even abusive. He then deleted that, but threatened me with more of the same treatment should I dare to submit a comment to his site again. What a nice man.]

Later, Tim Montgomerie removed Nadine’s comment, subsequently erasing the responses by two other people challenging her assertion in exactly the same way (i.e. by linking to this same text):

It is, however, easy to see how people might think that you have claimed exactly that. See http://awurl.com/KsCAUoaAR#first_awesome_highlight

Then, Dorries posted the text of this same comment on her ‘blog’, where no comments from readers are allowed, thus allowing her to maintain that she never claimed a foetus had punched its way out of the womb without fear of contradiction.

(Incidentally, the original ban on comments on Dorries’ site dates back to… the incident where Dorries claimed a foetus punched its way out of the womb.)

If anybody has misrepresented her position about anything, then let’s have Dorries challenge those misrepresentations, not delete or ignore them.

What is her position, exactly? That she didn’t say ‘punched’ specifically? Was it more of a jab, then? Or a karate chop?

Or does she instead maintain that she said a foetus did this, and not a baby? Somehow, I doubt she would make this distinction. Dorries is on record as being fiercely defensive of certain literal interpretations of Bible passages supporting the concept that life begins at conception (a deeply religious view approaching if not stepping over the line into fundamentalism that makes every abortion a murder in the eyes of most if not all of her closest supporters… not that these people can afford to admit it in public while campaigning on abortion).

In short, if her position has been misrepresented on this, then Nadine Dorries has entirely failed to explain how this is being done.

That said, the last incident where I saw her rise publicly to any challenge like this was on Twitter in April of 2010, and she did offer this at the time:

“It was an in utero op and pictured during surgery. Interesting that not one reputable pro-choice group denies the authenticity.” – Nadine Dorries (source deleted, see screen capture below)

Let’s put the matter of who did or did not deny its authenticity to one side, and let Dorries have this one. (In other words; let’s pretend that she is not merely pretending that this never happened.)

Instead, let’s look at what she asks us to take into consideration when we judge her account of that event.

Yes, it was an “in utero (operation)”, and I’ve acknowledged this myself…

“I’ve heard some MPs talk bullshit in my time, but the idea that a 21-week-old foetus could punch its way out of the womb (with or without a starting incision) reached new heights for me.” – Me, also in April 2010

… but the best that can be said for Dorries, if we are to accept that the 21-week-old foetus acted independently in this way at all, is that she was saying that the doctor gave the ickle foetus a bit of a head-start with his scalpel.

What Dorries clearly proposes here is that the “jiggered” edges resulted from the foetus thrusting its arm out with such force that it tore human flesh (please excuse the unsavoury mental image, and the image that follows): 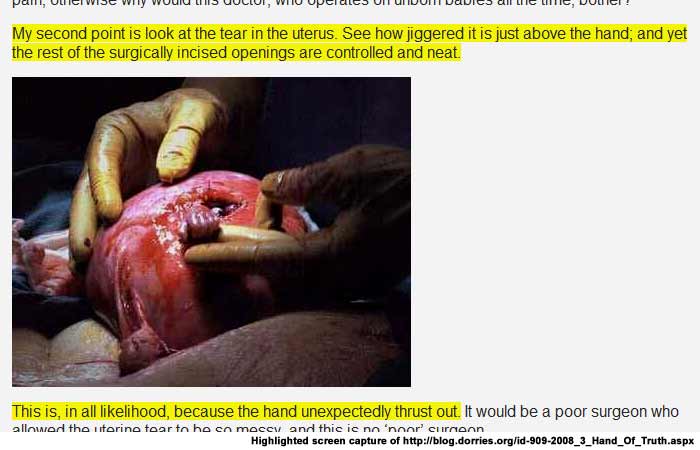 In layman’s terms, she maintained that a 21-week-old foetus had punched its way out of the uterus, or ‘womb’ as it is more commonly known. It does not matter is she didn’t use the exact word ‘punched’ or if she argues that the foetus had a head-start or not; her claim that it happened at all is as absurd and as insulting to the intelligence as her implication that the surgeon changed his story because he feared the wrath of violent pro-abortionists.

This is why you should not listen to Nadine Dorries about anything of a medical nature, because if she isn’t a liar, or an idiot, or delusional, then she’s a lying, delusional idiot.

These are not just “bad words” or some mere abuse/insults I throw around lightly. I use these words quite deliberately and entirely accurately:

lie
(n.)
1. an untrue statement deliberately used to mislead,
2. something that is deliberately intended to deceive,

delusional
(adj.)
suffering from or prone to belief in something that is not true,

I also say the following knowing that my words could not be more damaging to someone campaigning on the subject of abortion; Nadine Dorries is completely ignorant of relevant medical procedures, and uses unsubstantiated anecdotes, distorted/falsified statistics, and outright lies to support the campaigns she supports that are unquestionably engineered by religious groups and conceived quite deliberately to restrict a woman’s right to govern her own body.

On the latter point, what Nadine Dorries offers in her current round of proposed changes to abortion law is profoundly dishonest to begin with; it amounts to the ‘choice’ to be legally compelled to be ‘informed’ by people with a hidden religious agenda. Meanwhile, Dorries issues dark whispers about the profit motive of care providers who conduct abortions and portrays them as the primary if not sole opponents to what she proposes.

Well, I oppose what she proposes, but primarily I object to the absurd lies she has used to push her anti-abortion campaigns, and the malicious lies she has aimed at critics who have dared to challenge her. It is what brought me to her attention, and the only thing that has really surprised me about her response to my challenges is how inexcusably childish, malicious and dangerous her resulting accusations have become, and how much the Conservative Party have let her get away with… especially after they defended this same MP against a proposed smear campaign while declaring that there is no place for this kind of behaviour in politics.

Did Nadine Dorries claim that a 21-week-old foetus punched its way out of a womb? Yes, she did. She did exactly that. And, incredibly, that’s not the worst of it.

Nadine Dorries has no credible role to play in the abortion debate. She’s lucky she’s still an MP.

One Response to "Nadine Dorries: the missing punchline"