CPS on Dorries: “insufficient evidence to proceed to a prosecution”

As you can see from the following statement released in response to a query to the London Met, the allegation reported by two newspapers and repeated on this blog was entirely true; an expenses claim submitted by Nadine Dorries’ was under investigation by police, and the matter was later referred to and considered by the Crown Prosecution Service:

“An allegation of dishonest parliamentary claims was received by the MPS on 20/5/10. As a result of a detailed assessment an investigation began. A file of evidence was submitted to the CPS on 9/12/10. As a result of further evidence, the investigation continued and the case was again considered by the joint MPS/CPS panel. The panel has now recommended that there is insufficient evidence to proceed to a prosecution and therefore police have decided to take no further action.” – London Metropolitan Police spokesperson

This is something that has gone unreported in Nadine Dorries’ local paper (Bedfordshire on Sunday).

Dorries herself has found time to heavily imply that the person making the complaint (a former employee) was guilty of misconduct, but she has yet to produce any supporting evidence and there is no word of her filing any kind of complaint. Meanwhile, Bedfordshire on Sunday editor Chris Gill has seen fit to publish an article portraying my investigation of this same story as intrusion or worse, based on nothing more than assertions by Nadine Dorries and/or Lynn Elson that phone calls had been made to police.

To remind you of the detail, here is an excerpt from the original story as it broke, just prior to the date in May when Dorries’ former employee Peter Hand made the relevant complaint to the London Met:

Dorries, who last week retained her mid-Bedfordshire seat, claimed the money for an annual report in 2007 on her performance as an MP, and consultancy services, but Hand said he never saw the report or worked on it. Dorries claimed a total of more than £40,000 in expenses for services provided by Marketing Management (Midlands), owned by her friend Lynn Elson. They live near each other in the Cotswolds.

Dorries claimed £9,987.50 for Marketing Management in June 2007 for the design, layout and production of an annual report and for consultancy. She says she spent the money, and posted a copy of the report on her website. However, it does not appear to be professionally produced. The previous year, by contrast, she issued a glossy four-page professionally produced report with more than 25 pictures, news articles, an interview and a breakdown of her typical working day as an MP.

Hand, who now works for the charity Mencap, said: “The 2006 report was posted on her website and I was closely involved in its production.

“I was never aware a report was produced in 2007 and never saw one. Even if there was this leaflet, I don’t understand how the costs could be so high.”

Dorries said: “I’ve done an annual report every year since I’ve been an MP. We did keep a lot of stuff from Peter.”

She would not provide details of the printing firm which had been used for the work or a breakdown of what Elson’s firm charged for.

And here is a picture of the invoice for the work Nadine Dorries claims Lynn Elson undertook for her (PDF/source): 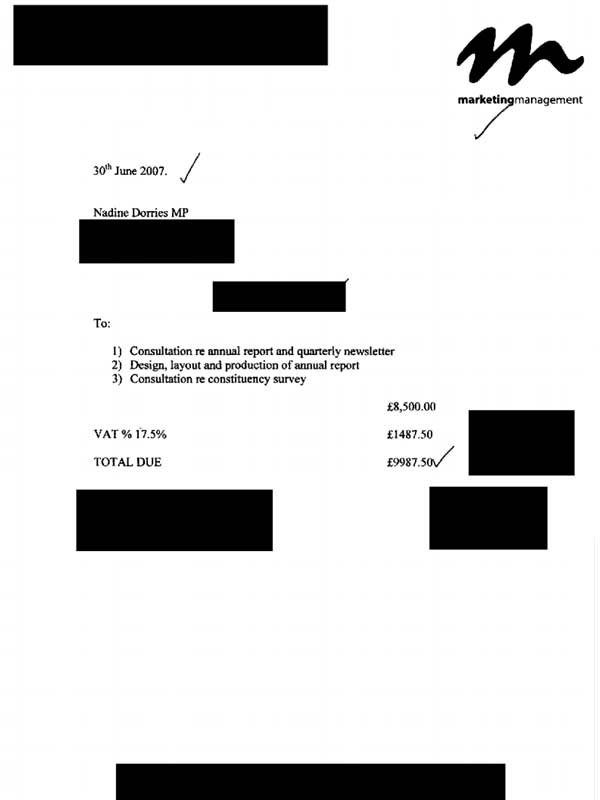 And here is the only sign of any visible result to date; two photographs of the report that Lynn Elson produced (which appears to be nothing more than a two-page document created in Word): 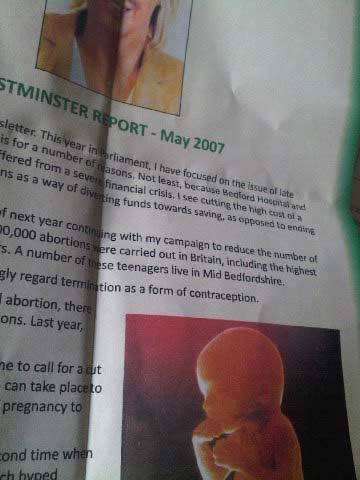 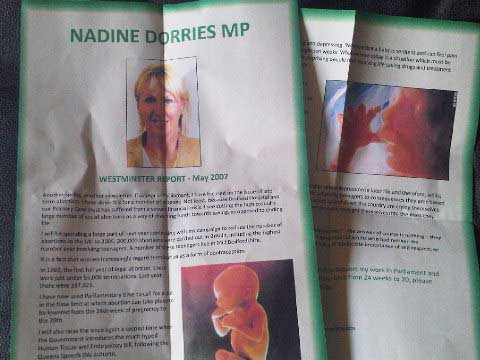 There is no record of any payment made for distribution of this ‘annual report’, it does not appear to have been published on/through Dorries’ site at any stage (despite her claims to the contrary), and judging by these photos, pointed questions might be asked about the appropriateness its content… if we were permitted to read it in full and judge its worth for ourselves.

Did Nadine Dorries present police and/or the CPS with a copy of this ‘annual report’? If so, then perhaps she would care to publish it at last. (This time last year, she claimed that she could not locate a copy, and implied that she would be perfectly willing to publish it otherwise.)

Did Lynn Elson offer a whole or partial refund for this fee? If so, when was this offered and why?

Did Nadine Dorries withdraw this expenses claim and pay back the money? If so, when did this happen and why?

Oh, and why is Bedfordshire on Sunday not asking these questions? They do not go away because of lack of evidence*. If anything, what little Dorries has published in her defence raises further questions.

Just to provide one single example; I seriously doubt that any opening argument about the strained budget of a local hospital can justify spending close to £10,000 of taxpayer’s money on what appears to be two-page ‘report’ promoting Dorries’ campaign to reduce the availability of abortion: 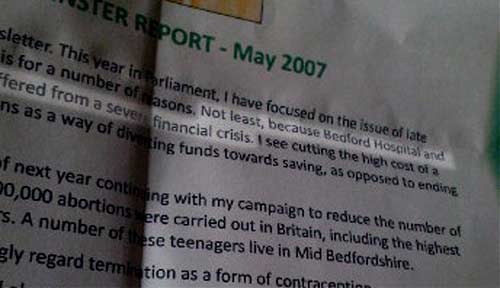 (*Similarly, Lynn Elson resigning does not erase the many questions about the tens of thousands of pounds Dorries has paid her over the years; quite the opposite once it is obvious that the reasons she gives for her resignation are an hysterical invention, or worse, a calculated lie.)

UPDATE (7pm) – Dorries has responded to these questions by once again implying that I am somehow guilty of stalking her**, and by accusing me of publishing “blogs which are malicious, un-founded and for the most part totally untrue”. She has been asked to identify any content in this post that is inaccurate so I might correct it, and I’ll happily extend that invitation to cover the rest of my website and anything else I’ve written, said or published about her. On that note, The Telegraph have reported this same CPS revelation within the past hour, but suggest the investigation centred mainly on Nadine’s ‘second home’ rental claims.

UPDATE (27 April) – ** Unity on the relevant allegation from Dorries (she claims I’ve been “warned by Police not to enter Bedfordshire”): “Dorries’ claim is not simply a lie, it’s a desperately bad lie; one so divorced from reality as to make its falsity obvious to all but the most gullible and credulous of her readers.”

UPDATE (27 April) – Jim Hamilton on that same allegation; “I worked for Bedfordshire Police for over 6 years, and this would be the first time that I’ve ever heard of such an instruction being given.”

9 Responses to "CPS on Dorries: “insufficient evidence to proceed to a prosecution”"