John Elmes and why you can’t trust Times Higher Education

This entry was posted on
Tuesday, June 14th, 2011 at
6:41 am and is filed
under Consume!, Old Media, Teh Interwebs, The Political Weblog Movement.

Recently, staff at Times Higher Education surprised a lot of their readers and supporters by seeking to promote themselves in blogs with the name ‘bloggerheads’, and acting both arrogantly and dishonestly when it was pointed out to them that someone (namely, me) had already been using the name for 10 years:

Ann Mroz: patronising, unpleasant and dishonest
The Times Higher Education correspondence
THE tank on my lawn (and how/when it got there)

John Elmes claimed that editors senior to him came up with the ‘bloggerheads’ name for his “round-up of the scholarly web”. Editors senior to Elmes then claimed it was the work of editors junior to them.

Me, I dare to assume that because it was John’s baby, he at least had some say in naming it. He certainly sought to retain the use of ‘bloggerheads’ in a thoroughly unreasonable fashion; it was Elmes who initially asked me if I had “copyrighted” the name (i.e. before I was passed on to senior editors who asked if I had trademarked the name) and it was Elmes who, at a peak in our dispute, took to naming the feature ‘The Bloggerheads’.

That said, the arrogance and dishonesty I encountered went right to the top; Editor Ann Mroz initially pretended that I had no rights under law because I had not trademarked the name, and then changed her position when I called her bluff. The Deputy Editor (Phil Baty) claimed that Times Higher Education were not aware of my site before using the name ‘bloggerheads’, but my site tracking says otherwise, and a week after I confronted their lawyer with this finding, no-one at Times Higher Education has offered any kind of answer to this.

While I am pleased that THE have finally removed all references to ‘bloggerheads’ from their site, I am greatly disappointed by their refusal to investigate/explain this discrepancy, their general dishonesty, and their apparent last-ditch effort to pass the following off as a condition of that removal:

“I must ask you to please remove your blog post header describing our editor as “dishonest” and the picture of our employee from your website immediately.”

I was even more disappointed to later discover that no explanation or apology of any kind was in the offing (especially after I had produced evidence suggesting that it was not quite the innocent mistake Times Higher Education had made it out to be).

I was, however, entirely unsurprised to see that the new name Elmes/THE had chosen was entirely lacking in invention; John Elmes’ round-up of the scholarly web is now named… ‘THE Scholarly Web’: 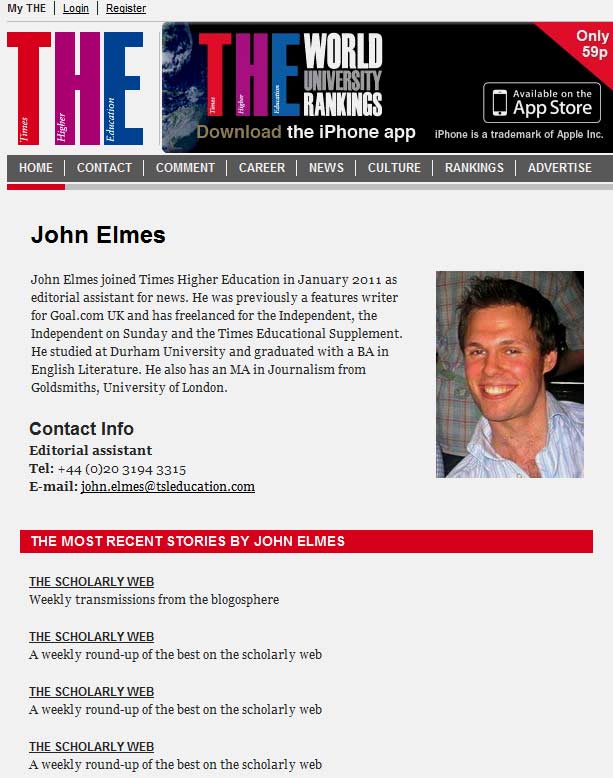 Unlike certain MPs, I am not sniffy about those who have been educated at university, but I reserve the right to point and laugh when it is clear that such an education has been wasted.

To close, for those who have some degree of faith in Times Higher Education, it is my sad duty to inform you that the magazine is staffed by the type of people who do not admit to mistakes, and instead seek to erase them, while bullying anyone who dares to make a noise about it; i.e. in one very important respect, they are no better than your average tabloid. I am sure that media-watchers especially understand what this means about taking anything THE claim at face value; they will know what a veneer of perfection usually hides.

Regrettable, but there it is. There is no getting away from the fact that Times Higher Education were entirely dishonest in their dealings with me, and then sought to erase their mistake rather than admit to any of that. They certainly don’t have any intention of acknowledging their error in print. How can you trust anything they commit to print if that’s their attitude?

Tim is the sole author of Bloggerheads.
View all posts by Tim Ireland →
This entry was posted in Consume!, Old Media, Teh Interwebs, The Political Weblog Movement. Bookmark the permalink.