Tim Bell – rogues and vagabonds and bare… oh my!

My scanner is having some emotional problems right now (it’s never quite recovered from the mammoth task of scanning all those Page 3 girls) so formal recruitment and data distribution for The PR Transparency Project will be subject to a minor delay.

In the meantime, I thought it would be appropriate for me to acid-test the waters with what I suspect will be one of the most contentious items from this 1997 book about Tim Bell and get it out of the way. Having read the book, I can assure you that there are many more items of greater relevance to any discussion about Tim Bell’s conduct as a PR/ad executive (more), so if we can all get past this and move on, that would be a very good thing indeed.

I post the following without comment or analysis. While the following passage only refers to ‘Bell’, it is definitely about Tim Bell, Chairman of Chime Communications (holding company for a portfolio of 35 companies including the Bell Pottinger group), and it is an accurate scan and verbatim* transcript of Page 45 from The Ultimate Spin Doctor: The Life and Fast Times of Tim Bell (ISBN-10: 0340696745). I did not personally witness the incident, and being only 7 years old at the time, I would expect Tim Bell to be rather glad that I didn’t. 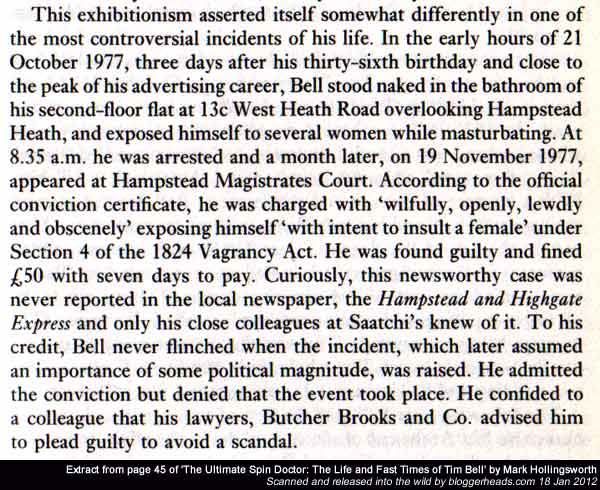 EXTRACT FROM PAGE 45 OF ‘THE ULTIMATE SPIN DOCTOR: THE LIFE AND FAST TIMES OF TIM BELL’

This exhibitionism asserted itself somewhat differently in one of the most controversial incidents of his life. In the early hours of 21 October 1977, three days after his thirty-sixth birthday and close to the peak of his advertising career, Bell stood naked in the bathroom of his second-floor flat at 13c West Heath Road overlooking Hampstead Heath, and exposed himself to several women while masturbating. At 8.35 a.m. he was arrested and a month later, on 19 November 1977, appeared at Hampstead Magistrates Court. According to the official conviction certificate, he was charged with ‘wilfully, openly, lewdly and obscenely’ exposing himself ‘with intent to insult a female’ under Section 4 of the 1824 Vagrancy Act. He was found guilty and fined £50 with seven days to pay. Curiously, this newsworthy case was never reported in the local newspaper, the Hampstead and Highgate Express and only his close colleagues at Saatchi’s knew of it. To his credit, Bell never flinched when the incident, which later assumed an importance of some magnitude, was raised. He admitted the conviction but denied that the event took place. He confided to a colleague that his lawyers, Butcher Brooks and Co. advised him to plead guilty to avoid a scandal.

[*Hyperlinks have been added. One to a Google Street View of the property involved, and one to the relevant Act. Text has not been altered.]

Tim is the sole author of Bloggerheads.
View all posts by Tim Ireland →
This entry was posted in Consume!, Old Media, Teh Interwebs, Tories! Tories! Tories!. Bookmark the permalink.

7 Responses to "Tim Bell – rogues and vagabonds and bare… oh my!"