Wonga.com are lying about student loans

This entry was posted on
Thursday, January 12th, 2012 at
9:44 am and is filed
under Consume!, Search Engine Optimisation.

Hi folks. I’m facing some delays on the Dorries matter (mainly waiting for evidence; the Met are 5 weeks late), but I’m sure we’ll be back on track shortly.

In the meantime, here’s an open letter to loan company Wonga.com, who today reacted to a massive backlash (more) by claiming they did not actively target students.

To: john.moorwood@wonga.com
From: Tim Ireland
Date: Thu, Jan 12, 2012 at 9:44 AM
Subject: “we do not actively target students as potential customers ”

If you do not target students, how do you explain the following Page Title and META Tags that are still live on the same page where you claim “we do not actively target students as potential customers”?

(*Please note that chevrons have been replaced with brackets to avoid any data display issues. Otherwise, code is verbatim.)

You also claimed the following in that same statement on that same page:

“The previous article on this page was several years old and one of many brief pieces we have written about the broad subject of credit since we launched our online loans service. No-one was directed to this page, nor was it prominently promoted on the website.”

But there is a prominent indexable link to this page from your front page and every other page. It is one of only 13 links of this type, so it is clearly a high priority and promoted very heavily in SEO terms:

A similar page which also carries today’s statement targets queries about student overdrafts (a link to it is included in the list referenced above). This page ranks 8th in Google for queries for ‘student overdrafts’, and this is clearly by design and not by accident. According to SearchMetrics, you also currently rank 34th in Google for ‘student loan’ and 19th for ‘loans for students’.

Do you still wish to pretend that these pages were an accidental afterthought of no current significance to you?

Be warned that I am an SEO professional with over a decade of experience, and I am unlikely to react favourably to further distortions. Also, this is an open letter that I have published on my blog, so do yourself a favour and don’t waste my time by hiding behind the sofa and pretending that you’re not home.

As usual, you can expect updates to follow. Cheers all.

UPDATE – I think it’s best if I let the resulting correspondence speak for itself at this stage:

Hi. We will be removing the pages / links completely soon, we just wanted to have a message there temporarily to make a few points.

[John Moorwood ]
Sent from my iPhone

Yes, but the ‘points’ you make are demonstrable lies and distortions, and I have published an article saying/displaying this quite clearly. Do you seriously have no response to that?

UPDATE – Greg Power has noticed that Wonga.com are still actively bidding for queries relating to students and student loans in AdWords. This is completely distinct from their SEO efforts/excuses, and it is not something that happens by accident. Wonga.com are actively pursuing students and trying to flog them loans at a typical APR of up to 4214% while claiming that they never intended to do any such thing:

UPDATE – Take a look at this page from the Wonga site (spotted by Tom Hatton). It features an expensive-looking video that tries very hard to look like a news programme. The nice lady behind the desk encourages students to use Wonga.com in order to avoid “a nasty debt hangover after graduation”. (Hey, why risk “hefty overdraft fees” when you can simply take out a Wonga loan with an APR of over 4000%?)

Wonga.com removed the page very quickly after it was spotted/highlighted on Twitter, but if they ever remove the video itself, the text on this mirror of that page contains the entire script. I have also saved a copy of the video should Wonga.com ever care to deny that at the very end – during the fade-out – there is a blink-and-you-miss-it alert in news-ticker style text (spotter: Jon W). This text announces that “unauthorised” debt with Wonga carries a 46,000,000% interest rate. No, totally not kidding: 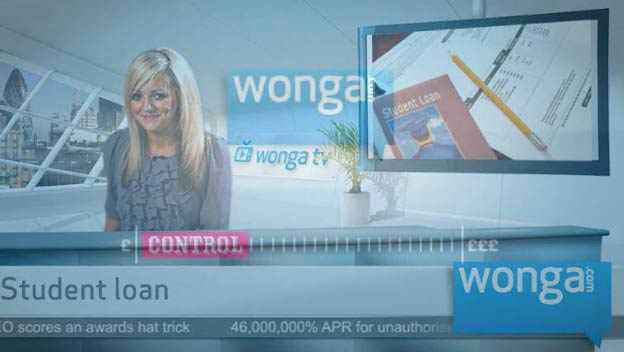 UPDATE (16 Jan) – Errol Damelin, founder and CEO of Wonga.com, has been made aware that his staff lied about targeting student loans. He took no detectable action in response, and offered no reply; he simply forwarded my email to the same people who have been lying to the public. (Just for the record, should he later wish to pretend that he knew nothing about this at the time.)

UPDATE (16 Feb) – It is now over a month since this article was first published. Yesterday, I emailed the CEO of Wonga.com for a second time, and for a second time, I watched as the recipient merely passed the email on to underlings who continue to (a) ignore this evidence and (b) stand by a demonstrable lie:

Wonga.com currently invest heavily in TV ads claiming that they offer “straight talk” about money. Meanwhile, they stand by what you know to be a demonstrable lie about targeting the student loan market.

It is over a month since I last wrote to you about this matter. I should warn you that I tracked my last email, so I know it was read by the recipient and then forwarded to the same team at Wonga who continue to stand by a demonstrable lie.

What does this mean? It means that you cannot claim to be unaware of the details*; you do not enjoy the luxury of plausible deniability.

This dishonesty and inaction in the face of due criticism is entirely unacceptable. I seek a response to my article (see link) and my original email (below), plus a fitting explanation/apology for my being stonewalled by your staff, even after I contacted you directly and pointed out that they were ignoring me and the evidence I had published:
https://www.bloggerheads.com/archives/2012/01/wonga/

A man in your position cannot afford to turn his back on evidence that his staff are misleading the public about their practices. I urge you to take this matter seriously and respond today.

(*Unless you’d care to take a page from James Murdoch’s book, and claim that you saw the email but didn’t read it.)

Since the initial (dishonest) response, your staff have seen fit to ignore me rather than admit to any of the evidence I have uncovered that reveals they lied about targeting students.

Wonga.com definitely did target students, and there is evidence that they assigned budget to do this in SEO, in PPC, and even through video production:
https://www.bloggerheads.com/archives/2012/01/wonga/

So I dare to email you in your mighty tower of ivory and ask just what in the hell is going on at Wonga.com, and if you approve personally of (a) the targeting of students in this way, and (b) the dishonest response to the resulting backlash.

I would even go so far as to mention that you may want to cast an eye over your customer base and determine if there are any customers you have gained through your targeting of students who are currently accruing any significant debt with you; it’s a ticking time bomb.

Tim is the sole author of Bloggerheads.
View all posts by Tim Ireland →
This entry was posted in Consume!, Search Engine Optimisation. Bookmark the permalink.

11 Responses to "Wonga.com are lying about student loans"