On Tuesday 7 February, there was a moment in the Leveson Inquiry when Sun editor Dominic Mohan sought to distance himself and even the previous editor from a deeply personal and abusive attack on Clare Short, the MP who had dared to question the appropriateness of using soft pornography to shift mainstream newspapers.

The full transcript of the relevant exchange between Robert Jay Q.C. (Counsel to Inquiry) and Dominic Mohan is available here (more) if you would care to see the full exchange and the surrounding context. I have used an edited extract below in order to highlight key points:

Dominic Mohan: I think that it’s worth looking at Page 3 in a wider context, and in the Sun’s context of women’s issues that we cover. A lot of the Page 3 girls, they’re much more than models. They’ve become ambassadors for the paper… They’re good role models*.

Robert Jay Q.C.: Can I deal with a number of points which are around Page 3. One of them is before your time. Under tab 17 — this is before your time as editor — I don’t have the date, but this is a piece which is rudely critical of Clare Short, isn’t it?

Dominic Mohan: It is.

Robert Jay Q.C.: Is this appropriate language, do you think, to use, Mr Mohan?

Dominic Mohan: It’s not probably something I would run now, no.

Robert Jay Q.C.: To be fair, I’m sure this isn’t you, and we don’t have a date for it, but we have an earlier piece for which we do have a date, tab 18. This is January 2004, when you’re working for the paper but you’re not editor. I think you’d left Bizarre by then. Where were you in January 2004 within the Sun?

Dominic Mohan: I think I would have — after I left Bizarre, I became a columnist. I had a weekly opinion column in the paper.

Robert Jay Q.C.: Did you have any involvement in this piece we’re looking at?

Dominic Mohan: No. I don’t believe I did.

Robert Jay Q.C.: Is it the sort of piece which the Sun would run now, do you think?

Dominic Mohan: Possibly not in that way, no. I mean, I think there is an article in — actually, I’m not sure it’s in this piece. It was in one of the submissions from one of the women’s groups, but I ran a similar piece — sorry, I ran a piece in the run-up to the last election where — which was about Harriet Harman and Lynne Featherstone because they were claiming they wanted to ban page 3, but I didn’t use that kind of language that was used in the previous article. It wasn’t as — we weren’t on the offensive in that way.

Robert Jay Q.C.: Possibly or probably when one looks at it, Mr Mohan. What do you think?

Dominic Mohan: As I say, I don’t think I would run it in that way now, although I do think — I mean, clearly “fat and jealous” is in quotes. It is a quotation from somebody.

A “quotation from somebody”, says Mohan, heavily implying that the words are not responsibility/work of The Sun and leaving it that.

Being a cynical, curious and somewhat resourceful type, I went to the trouble of looking up the 2004 item/edition that Mohan part-defends here, and it is entirely clear to me, as it should have been to him, that the “quotation from somebody” came from certain “ambassadors for the paper” whose role Mohan defends on the basis that they are “good role models”. Of course, here we assume that this is one of those rare instances where statements printed by The Sun in the name of Page 3 models are actual statements from Page 3 models, and not an invention of the editor (then Rebekah Wade/Brooks, who would have OKed the picture rendering Clare Short topless and the image comparing her to the back of a bus). 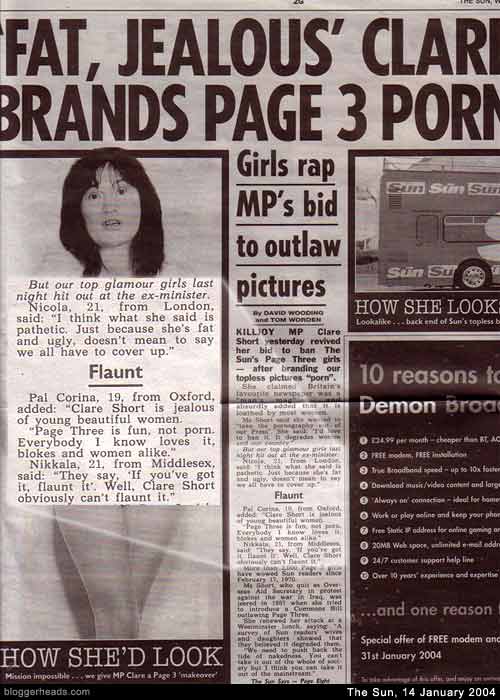 Further, the editor clearly endorsed the ‘fat and ugly’ quote in that day’s editorial…

… and even saw fit to run a Page 3 on the subject, just to stress the point for those one-handed readers with shorter attention spans: 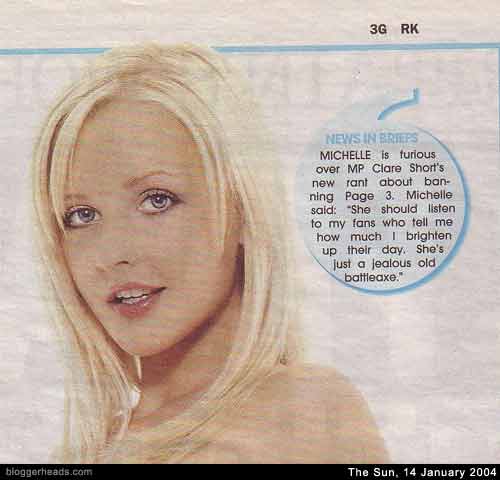 It’s getting to the point where Lord Justice Leveson might want to seriously consider calling past and present Page 3 girls to the inquiry, not just to answer this point, but also some serious questions about other editorials in their name.

[*The original transcript contains an obvious error, where Mohan is quoted as saying Page 3 girls are ‘role moulds’. I have corrected that here for clarity… and to avoid getting needlessly personal.]

Tim is the sole author of Bloggerheads.
View all posts by Tim Ireland →
This entry was posted in Old Media, Page 3 - News in Briefs, Rupert 'The Evil One' Murdoch. Bookmark the permalink.