Guardian – Inquiry into shooting of wounded Iraqi shown in television footage : The Pentagon said last night it was opening an investigation into the shooting of an unarmed and wounded Iraqi in Falluja, following the release of television footage showing what appeared to be a close-range execution-style killing. The Iraqi was one of five wounded prisoners left in a battle-scarred mosque after marines fought their way through the city at the weekend.

Independent – ‘This one’s faking he’s dead’… ‘He’s dead now’: The footage showed several Marines with a group of prisoners who were either lying on the floor or propped against a wall of the bombed-out building. One Marine can be heard declaring that one of the prisoners was faking his injuries. “He’s fucking faking he’s dead. He faking he’s fucking dead,” says the Marine. At that point a clatter of gunfire can be heard as one of the Marines shoots the prisoner. Another voice can then be heard saying: “He’s dead now.” The footage was obtained by a team from the American NBC network that was embedded with the Marine Corps during last week’s seven-day battle to capture the city of Fallujah, west of Baghdad, which military commanders say has been a focus of Iraqi resistance. The film was then pooled and made available to other media.

Rest assured that if there were no camera there, you probably wouldn’t have even heard about this. For the same reason you’ve probably never heard of Hanan Saleh Matrud. And for the same reason Bush and Blair didn’t feel the need to act on the torture of prisoners until everyone saw the pictures.

How many prisoners are the U.S. hiding from the world in Iraq? Is it a “handful”? Dozens? They assure us there are no female detainees in custody in Iraq (well, maybe a couple of really, really evil ones… but can we really believe that? 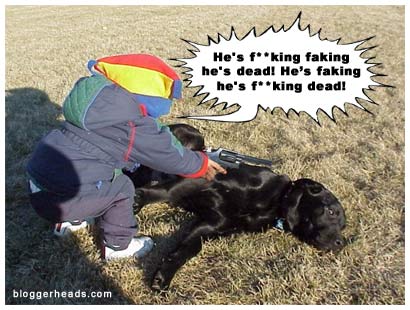 Tim is the sole author of Bloggerheads.
View all posts by Tim Ireland →
This entry was posted in It's War! It's Legal! It's Lovely!, Page 3 - News in Briefs. Bookmark the permalink.