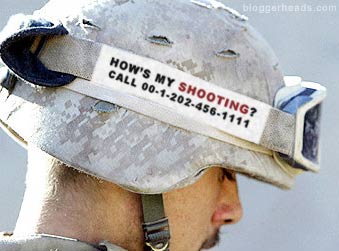 Washington Post – Barrage of Bullets Drowned Out Cries of Comrades – Myths shaped Pat Tillman’s reputation, and mystery shrouded his death. A long-haired, fierce-hitting defensive back with the Arizona Cardinals of the National Football League, he turned away a $3.6 million contract after the Sept. 11, 2001, attacks to volunteer for the war on terrorism, ultimately giving his life in combat in Taliban-infested southeastern Afghanistan. Millions of stunned Americans mourned his death last April 22 and embraced his sacrifice as a rare example of courage and national service. But the full story of how Tillman ended up on that Afghan ridge and why he died at the hands of his own comrades has never been told

And one can only wonder why…

Store that bit about Pat Tillman’s primary motivation. I’ll get back to it shortly.

For now, let’s take a look at what else is being hidden from us while we’re being asked to support the troops and believe in a humanitarian mission to rescue Iraqis.

BBC – Hold Iraq death probe, Blair told – Forty-six eminent figures including military men, ex-diplomats and bishops have written to Tony Blair urging a inquiry into civilian deaths in Iraq. It comes after a study in medical journal the Lancet said nearly 100,000 died following the invasion. The study, by US and Iraqi researchers, suggested the risk of violent death was higher after the war than before. UK ministers rejected October’s Lancet figures, but have offered no alternative estimate of their own.

It was bizarre hearing Jack Straw on Radio 4 a few weeks ago disputing ‘questionable’ civilian casualty figures by citing the numbers provided by Iraq Body Count.1. These numbers are based on a comprehensive survey of online media reports. In other words, any death(s) announced by the U.S. Army or witnessed by a journalist. Of course, we can trust entirely the figures released by the former. And the latter can move freely about Iraq in order to bear witness to every incident, large or small.2. Iraq Body Count exists because the almighty coalition hasn’t been doing what is their legal and moral duty…Allies accused of breaking Geneva Conventions on civilian losses: This is not usual in modern warfare. In most past conflicts, attempts were made to keep a tally of civilian losses. Legal experts say that, particularly in the case of Iraq, it is the duty of occupying powers to do so under the Geneva Conventions. The Pentagon says it is not helpful to keep a “body count”. Yet, there is no hesitation in giving numbers of Iraqi fighters, described as “Saddam loyalists” and “al-Qa’ida elements” who have supposedly been eliminated by the Allies. Jack Straw is now referring to figures from the Iraqi Ministry of Health… which handily only provides figures between April and October 2004. And only counts people/bodies that manage to find their way to a hospital.But.. wait a mo… let’s be fair. The U.S. is keeping a tally of civilian casualties. They’re just keeping those figures under wraps. Perhaps they would care to give Jack Straw or Tony Blair a peek at their figures. It may help them to speak with some authority on the subject.Moving right along….CNN – Navy: Some SEALs photos show approved tactics – Preliminary findings of a military inquiry suggest that some of the recently published photographs of Navy special forces capturing detainees in Iraq were taken for legitimate intelligence-gathering purposes and showed commandos using approved procedures, a Navy spokesman said. The photos, which have drawn a strong reaction in Arab media, also appear to show Navy SEALs sitting or lying on top of hooded and handcuffed detainees in the back of a pickup truck.1. Heh. Some.2. Cruel and inhumane – but approved. I’m a big fan of hooding especially, because its effects are twofold: it’s distressing to the prisoner, but it also helps to dehumanise the subject. Wait. Backtrack. Better make that ‘object’ now it has a bag on its head.With these kinds of ‘approved procedures’ alone, the Bush administration has a case to answer over Abu Ghraib. They helped to create a culture of abuse.Further – and here we get back to Pat Tillman’s primary motivation – the lie about the Iraq/911 connection wasn’t only fed to the folks at home – it was used to motivate the troops. Are we really surprised that someone is such a situation would want a little misplaced payback?Even further, deeper and uglier is the culture of lawlessness. The invasion itself was illegal. The detention of men, women and children in Guantanamo Bay and the conscious decision of the Bush administration to migrate detention/interrogation procedures from ‘Gitmo’ to U.S.-run prisons in Iraq was not only misguided, but extremely irresponsible. At the very least.And speaking of everybody’s favourite illegal detention centre…We recently learned that ‘evidence’ gained through use of torture can be used against the detainees in Guantanamo Bay. Allow me to take my Naive Peacenik beanie off for long enough to point out that a man who is being tortured is likely to say any old rubbish. It’s an entirely impractical way to gain quality intelligence.(puts beanie back on)The Red Cross reporting psychological/physical coercion “tantamount to torture” is one thing. People ignoring it? That’s to be expected. They reported the same thing in Abu Ghraib in 2003, but the outrages didn’t cease until everybody saw the pictures in early 2004.Oh., Sorry. Hang on…New York Times – Iraqi Prisoner Abuse Reported After Abu Ghraib Disclosures: Two Defense Department intelligence officials reported observing brutal treatment of Iraqi insurgents captured in Baghdad in June, several weeks after disclosures of abuses at Abu Ghraib prison created a worldwide uproar, according to a memorandum disclosed Tuesday.Sorry about that near-inaccuracy. Now, where was I? Oh, yes. The Red Cross reporting psychological/physical coercion “tantamount to torture” is one thing, but for the FBI to report cases of physical abuse and ‘intense isolation’ at Guantanamo is another. But perhaps not. We’ve known for quite some time that the FBI and CIA have been infiltrated by liberal nancy-boys. (Phew! Another near-inaccuracy averted. We better wrap this up soon.)So, in summary….A. Evidence gained via torture is admissible. But no-one has been tortured.B. Troops and the folks at home are fed the idea that Iraqis were responsible for 911, and hooding etc. is totally acceptable. Except when its unauthorised, when it’s not. But either way, it has no negative effect on the troops themselves. Because…C. There is no culture of lawlessness or abuse. Even if the whole war is illegal and a blind eye is turned to abuse.D. The U.S. Army visibly shows its concerns for Iraqis by maintaining a tally of civilian casualties. And keeping it a secret.E. And it’s vitally important that we support the troops. Except for those few bad apples who for no good reason abuse Iraqis and/or treat them like something less than human beings. We know they certainly weren’t ordered to do so to aid intelligence-gathering. Even if using the detention process to ‘soften up’ prisoners for interrogation is/was official U.S. policy. (Go back to A.)

Tim is the sole author of Bloggerheads.
View all posts by Tim Ireland →
This entry was posted in It's War! It's Legal! It's Lovely!. Bookmark the permalink.

One Response to "Iraq, Friendly Fire, Civilian Casualties, and a Total Lack Of Torture"