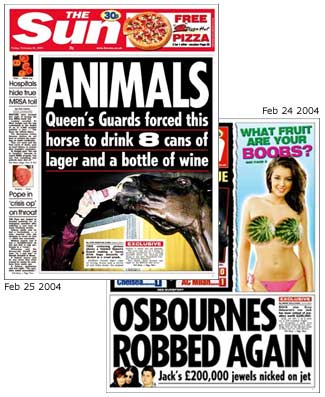 You may recall that the Osbournes got robbed the last time (almost) everybody was talking about security measures and the legal advice given for the invasion of Iraq (November 22 and 23 2004) but I’m *pretty* sure The Sun doesn’t have a team of professional crims on the payroll to provide timely distractions.

No, what I find most curious about this two-day sequence of front pages is that horse. Remember the puppy thrown off an overpass that got more coverage than the Abu Ghraib torture victims? (Click here and scroll to bottom.)

Now, as British soldiers are found guilty of abusing Iraqi prisoners and sentencing is nigh, Wade has decided to reserve the front page for the Queen’s guards getting a horse drunk.

This is yet another instance where Rebekah Wade seems to be suggesting that Iraqis are less important than animals. Either that, or she’s been reading Bloggerheads and this is a secret message to let me know that she has a thing for horses.

Speaking of such matters, the fun continues on Page 3 where, following Blair’s somewhat desperate ploy of upping the minimum wage, work-a-day peeps (who would well-and-truly freak out if they knew about this tax-dodging motherhumper) are assured by The Girl With The Boobs that all is well and the economy is strong.

Today Jak (19, from Tunbridge Wells) is delighted that British business is booming. And she’s doing her own bit for exports – by taking 10,000 advance orders for her single Come On. She adds: “Profits are up for British business. That’s a good sign the economy is doing just fine.”

Hrm. The propaganda is there, but somehow someone also found space to work in a plug for Jak’s single. This *may* have something to do with Jak being the stepdaughter of an executive editor.

UPDATE – Boris Johnson – Sorry, Blair, but that is so much phooey: Under the Bill that went through the Commons last night, the Home Secretary (the chap with the big ears and the white bumfluff beard) will be able to inflict this incarceration indefinitely upon any British person that he suspects – on the basis of we are not allowed to know what evidence – of being involved in “terrorism-related activities”. Above all, he will be able to do this without any obligation to bring that person to trial, and there, I think, he goes too far.

UPDATE – Perfect.co.uk – Minority Report (an extract won’t do it justice, I’m afraid; you’ll have to go and read it)

UPDATE – Peter Gasston – Proud to be civilised: None of the Iraqis were asked to give evidence; the British army says it could not find them. The Independent found them in 48 hours, living within a few km of the British base (note: the story is not online at the moment due to legal issues). They claim they were beaten by the British soldiers as suspected thieves; some of them, however, were employees of the camp.

UPDATE – Ahahahahahahahaha! Curtail those civil liberties! Quickly! Before the terrorists get us! Don’t think! Do it NOW! Chop-chop! Oooh, look out… I think I can hear them coming (and so on and so forth)….

The Scum – Don’t delay: There is no reason now for the Tories to stand in the way of the anti-terror laws. The Government has listened to the concerns of those who say, rightly or wrongly, that locking up suspects solely on the say-so of a politician is wrong. On Monday an amendment will be made so that a judge is involved in this process at an early stage. That will safeguard civil liberties. So Parliament must get on with making this new law effective as soon as possible. Every delay is one more day when the terrorists could inflict a dreadful outrage on this country and its citizens. No political party would ever be forgiven if its actions caused a delay which allowed a disaster to happen.

Boris, you fool! Can you not hear them coming for us?! RIGHT *NOW*?! Stop this madness and get on board before we all get blowed up, man!

UPDATE – The UK Today – End of an era: And what a corrupting influence power is. Back in 1994, the Labour Shadow Home Secretary stated that; “the liberty of the subject should be taken away not by the act of a politician, but by a court of law.” The name of this clear-thinking individual? Tony Blair.

UPDATE – Via Wibbler… Boing Boing – UK Labour MP flays govt over terror laws – incredible speech!: UK Labour MP Brian Sedgemore has given his last speech in Parliament, and it’s a doozy: he excoriates – nay, flays alive – the Blair government and Labour’s tame backbenchers for collaborating to turn Britain into a police state in the name of fighting terrorism.

Tim is the sole author of Bloggerheads.
View all posts by Tim Ireland →
This entry was posted in It's War! It's Legal! It's Lovely!, Page 3 - News in Briefs, Rupert 'The Evil One' Murdoch, The War on Stupid, Tony 'King Blair, UK General Election 2005. Bookmark the permalink.