I was in Legoland yesterday 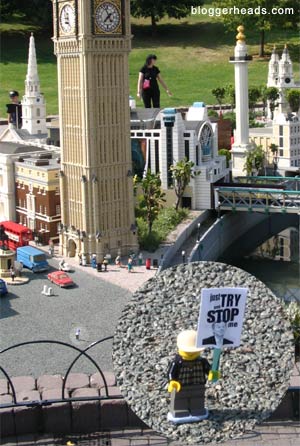 BBC – Demo ban protesters deny charges: Ten anti-war activists have appeared in court accused of defying a ban on unauthorised protests near Parliament. Ann Clancy, 70, from Harrow, north-west London, was among those arrested in demonstrations days after the ban came into force at the start of August.

Yes, but did they come into force on the 1st or the 6th? This curious approach to ‘enforcement’ may yet be explained. We shall see.

Now, where was I? Oh, yes… I was in Legoland yesterday. I figured the miniature version of Westminster would be missing something, so I took along a little treat to make the tableaux more authentic.

Here’s a picture of the little fella we nicknamed ‘Brian’ and put in place at about 10:30am. He was still on duty and drawing curious onlookers at 3:30pm. With any luck, he’s still there today. Unless he’s been nicked by a Lego bobby, of course.

PS – I’ve been a little slack on enforcement myself. I hope to get to it sometime on Tuesday. Cheers all.

2 Responses to "I was in Legoland yesterday"