And at 7:10pm this evening… Tony Blair burns

This entry was posted on
Saturday, November 5th, 2005 at
1:35 pm and is filed
under Guy Fawkes Night, Tony ‘King Blair. 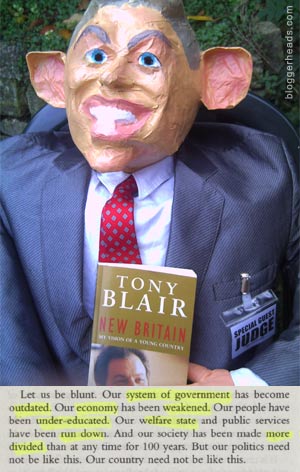 (For those who came in late: Burning Blair.)

As you can probably tell from his healthy glow, Tony’s ‘teflon’ coating has been completed without fuss or bother; but a little extra work popped up this morning…

This A.M. I went to a boot sale for some eye-food and happened across an early paperback copy of Tony Blair’s 1996 book; New Britain: My Vision of a Young Country.

The scan you see to your right is from the first page I saw as I leafed through it, before parting with my hard-earned 20p to buy it. The highlighting isn’t mine, but that of the original owner.

The book is now planted deep inside his chest, along with a few other items.

You may also note one final touch… the badge.

Our local line-up of Guys is traditionally an affair for the young-uns, so I needed to classify my Blair Guy as something other than an entry… so he is now officially a Special Guest Judge (Jury & Executioner).

I have two cameras to hand, one of which has (limited) video capabilities. I will do what I can to capture the moment.

UPDATE (8:10pm) – A full report will be with you on Monday, but I need to note the following for the record while it’s fresh in my mind:

– Torrential rain was forecast for this evening (across the whole of southern England), and this was the only thing that could have stopped Teh Burning… but that rain never eventuated.

– I didn’t hear a cross word all night; every person who saw Tony (and realised what he was there for) was happy – and vocal – about it.

– Tony was given the most prominent position on the bonfire.

– As people arrived, almost every electrical torch was trained on Tony.

– When it came time to throw the kerosene torches that would ignite the bonfire, the majority of people aimed for Tony and often spoke of their intent before they did so.

– When Tony collapsed into the flames… people cheered. Loudly!

Tony Blair, your time is up. Please hand in your pass at the desk before you leave… and don’t let the door hit your arse on the way out. 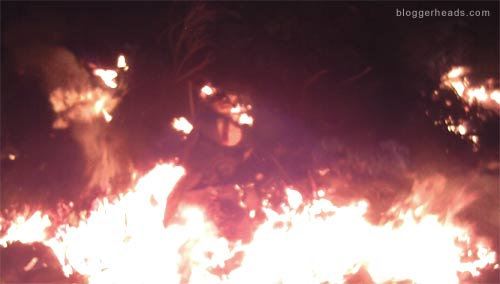 I talked to a few people with better cameras than my own. With any luck, they’ll get in touch and send in their pictures/footage. I have some further photos, video and sound of my own to share with you… later.

Meanwhile, I’d like to close by quoting James Brown:

Wow. I feel good. I knew that I would.

Tim is the sole author of Bloggerheads.
View all posts by Tim Ireland →
This entry was posted in Guy Fawkes Night, Tony 'King Blair. Bookmark the permalink.