It’s the day before my planned protest in Parliament Square, I’ve got my placard ready, the pamphlets are all printed and trimmed… but I haven’t heard a peep from the Met about my application.

OK, I’ve just called them. Apparently, the primary issue is the Bank Holiday weekend and ‘some’ notifications only went out by mail yesterday.

Mine didn’t arrive in today’s mail, so I guess I’ll have to wait until tomorrow (the day of the protest) for my paperwork.

PS – I scored a tasty treat at a boot sale this weekend. I am now the proud owner of a large and very noisy bell.

UPDATE (31 Aug) – Authorisation has arrived. We are GO for Operation Deadbeat. Oh, and it may be a typo, but they’ve authorised my demonstration from 6am to 7pm.

Justin has a photo report and says; “A jolly good time was had by all.”

Rachel reports with a rundown of all the protests and says; “It was good humoured and entirely British, eccentric, determined, legal. For now. Just.”

Here’s a BBC report and here are some screengrabs from the TV report… the naughty BBC reporter used a loudspeaker illegally live on television. Tut-tut.

More photos can be seen via D-Notice, Nether-World and Ham (via).

I waved my placard and rang my bell and told anyone who would listen that Tony Blair is a deadbeat who rips off hard-working consultants and doesn’t pay his bills. Said placard had precisely the desired effect, and anyone who asked me why Tony Blair owed me £2000 got about halfway through their question before they were swiftly furnished with a pamphlet that explained matters in detail. The text from that pamphlet appears below:

Via a quirk in search engine results that followed a publicity stunt in 2000, a hoax email address that I created ‘for’ Tony Blair – tony-blair@prime-minister.co.uk – started getting regular email intended for the PM. 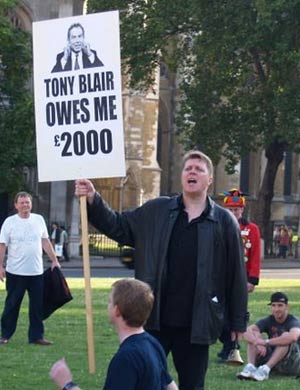 After a year of forwarding this email to his constituency office (at their request), I began a campaign for him to deliver on a 2001 election promise; that he would be more accessible to the public via email. This campaign began on 18th September 2002 and continued until the promised service was delivered.

On 20 January 2003, when no progress was being made and an insider at Downing Street assured me that such a service was widely regarded as ‘unworkable’, I drew upon my general expertise in internet communication and marketing (plus my rather specialised knowledge of how a simple published email address for Tony Blair would be used – and abused – by the public) and submitted/published full specifications for a workable service, including recommendations for a web-based interface with subject filtering and weekly ‘overview’ reports to be reviewed by the PM.

When it was eventually delivered (on 20th August, 2003 – almost a year after the campaign began) the new service used (wait for it) a web-based interface with subject filtering and monthly ‘overview’ reports to be reviewed by the PM.

Throughout the campaign, I was officially and studiously ignored by officials at Downing Street…with the exception of one happy week in February 2003 when Cherie Blair took an interest in my case. During that short period of contact, I took the trouble to ensure that the specifications had been received and read in full.

That same invoice stated that; “an official statement from Downing St acknowledging my contribution to the project will be accepted in lieu of payment.”

Now, over three years later, neither a statement nor a payment has followed… and I’m just a little bit pissed off about that. Wouldn’t you be?

So at 6:45pm myself and about half a dozen others marched on Downing Street for a lightning-strike attempt at door-step debt-collection. I approached the gates, curled Rachel’s placard into a megaphone and let rip:

“Tony Blair, the time has come for you to pay the £2000 you owe me. It’s been three years now, Tony… when are you going to pay me? (pause) Do you want your neighbours to know that you’re a deadbeat, Tony? (pause) I know you’re in there, Tony… I can hear the telly! (pause) Look, if you come out now, we can discuss this like gentlemen… I’d happily accept £200 as a down payment, but I know you’ve been having money trouble lately, so – if you wish – you can come out now and we can instead discuss refinancing at attractive High Street rates!”

Sadly, Tony chose to hide behind the sofa like the great big scaredy-cat that he is.

But… I did enjoy some not-so-quiet pints in the Red Lion afterwards and I hope to do so again one day very soon.

UPDATE – Oooh, look! A fan! Someone who doesn’t like a lot of what the Blairites have done, but still plays the ‘soap dodger’ card bastards like this rely on.

UPDATE – A detailed report from D-Notice and some lovely photos from Chris King.