Grant Shapps is a sock-puppeting loser

This entry was posted on
Tuesday, July 10th, 2007 at
12:48 pm and is filed
under The Political Weblog Movement. 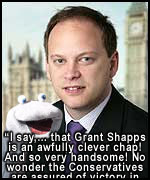 Mark Pack – EXCLUSIVE: Grant Shapps says “realistically we’re not going to win” in Ealing: I’m a generous soul, so I’m willing to listen to an innocent explanation for all this. Can anyone reasonably explain away why Grant Shapps appears to be trying to pass himself off as a Liberal Democrat?

Let me make it absolutely clear what you’re looking at here;

Grant Shapps is not just a Conservative MP and Shadow Housing Minister… he’s Vice Chairman of the Conservative Party “with responsibility for campaigning” (source).

And he’s just been caught in a very clumsy sock-puppeting attempt… because he forgot that he was still logged in to his personal YouTube account at the time of the attempt.

Here’s my take on what happened (I’ve obviously filled in some blanks here, but if I’m wrong about any of it, Grant is more that welcome to get in touch and correct me… as is the being known only as ‘aristoteliananselm’):

1. Grant Shapps created a new profile on YouTube with the intention of posing as a Lib Dem supporter/activist during the Ealing Southall by-election. I’m guessing that this is the (or a) profile created specifically for that purpose (see below for more).

2. To give his sock-puppet account more credibility, he arranged for a video to be made that would be cheap/easy to produce and typical of YouTube output; in this case he has gone for ‘loser lip-synching poorly to fave pop tune on his/her webcam‘.

4. The account was allowed to mature for a few days while Grant waited for just the right moment to strike. On 9 July 2007, following the successful recruitment of 5 Labour councillors, he judged that the moment had come… Grant readied himself, got into character, and prepared to pose as a Lib Dem supporter/activist admitting defeat over the defections (that he himself engineered).

Basically, he planned to deceive the electorate, undermine his opponents and blow his own horn at the same time.

5. Grant identified his target – this video of Ming Campbell opening the Lib Dem by-election HQ – and posted the following comment, the intent of which should be crystal-clear:

Okay, realistically we’re not going to win though. Especially since the Tories have just received 5 defecting Councillors from Labour. Don’t quite know how they’ve done it, but the Tories have stolen a march on us this time.

6. But then… oh fuck, oh bugger, oh Christ… oh fucking buggering Christ… he realised that he was still logged into his own personal account!

7. Meaning that the comment was headed with his name, and that his name linked back to his personal YouTube profile! Oh fuck, oh bugger, oh Christ! Does YouTube allow you to delete comments you have made on other people’s videos? No, it doesn’t! Oh fucking buggering Christ!!!

8. Perhaps Grant spent a few minutes considering his options (about the only option left to him was to login to his fake account and mark that comment as ‘spam’ in the dim hope that it would be deleted) and perhaps he spent an entire day flitting between hoping that no-one would notice and comforting himself with the notion that “It’s only the internet!” just in case someone did. Perhaps we will never know.

9. Either way, it was roughly 36 hours later when the aristoteliananselm account was used to post a comment that positively stinks of ‘activist posing as man in the street’:

To be honest, I don’t think Nigel can cut it as an MP. He doesn’t stand out from any of the other candidates, and the Lib Dem record on policy makes me wonder why I should bother even considering voting for them. I have my sights elsewhere – the Tories seem to have the best candidate for Ealing Southall.

And this time around, bless ’em, they appear to have got it right:

Now, I’ve witnessed and conducted some sock-puppeting busts in my time, but this one’s a whopper!

The best defence that Grant Shapps could put forward? Well, here’s a small selection of what you might expect based on my years of experience in dealing with political dickwits who use sock-puppets to ‘debate’, congratulate, or fellate themselves:

– Grant Shapps has been hacked! No doubt by a Lib-Dem sympathising computer hacker, proving what nasty people the Lib Dems really are and… (etc.)

– What are you? A conspiracy theorist?

– Why do you hate America?*

[*Does not apply in the UK unless torture, terror or napalm is involved.]

There are a lot of options there, but I think Grant will have to accept that this is a slam-dunk… and while we’re waiting for him to come to that conclusion…

One thing I would love to confirm is Grant’s alleged status as the Conservatives’ leading expert in e-campaigning (matters are unclear following recent departures and appointments). Can anyone shed light on his claimed, perceived or official e-expert status?

The other thing I would like to do is find out more about the person in the single video hosted under the aristoteliananselm account. My gut tells me that he’s a Tory activist who was somehow convinced to don reflective* Top Gun sunglasses and flap his lips for the good of the party. Can anyone identify this individual?

[*While the shot is set up in a way that avoids showing any room detail in the background, the reflective glasses give us tantalising glimpses of his surroundings.] 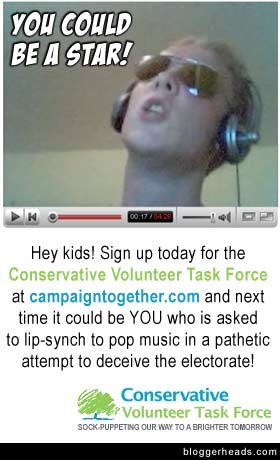 UPDATE (2:49pm) – I’ve just received a reply from Grant Shapps. I’m currently waiting for permission to quote from it, but what I can tell you right now is that the excuse he gives is on my list… and takes us into very familiar “I’m an internet expert, me!” territory.

UPDATE: (2:59pm) – Grant Shapps claims that his account was accessed by person or persons unknown because his password was set to “a rather too guessable ‘1234’” (since changed). Other claims are being made, and I’m seeking proof regarding same. For now, I would have it known for the record that Shapps’ excuse topped the list of options I provided.

UPDATE: (4:40pm) – Ha-ha! I demand some form of prize. Earlier today, I made this prediction over at Unity’s; What *will* Iain do? I’ve got odds on him providing ‘balance’ with an exclusive statement from Shapps.

Sure enough… the political ‘commentator’ came through…

Iain Dale – Shapps Denies Astroturfing Allegations: This all seemd a bit odd to me so I went to the horse’s mouth and have got a categoric denial that Grant did anything of the sort. It appears that he had a very easily guessable password on his Youtube account (it was 1234 !!!) and someone hacked into it… I can totally see why Mark Pack and others might have thought the worst and can’t blame them for highlighting it. Sometimes the story is not quite as good as one first thinks.

Matters are made even more amusing by the early anonymous (!) comment under this post from someone wondering when I would be issuing a public apology. Way to piss on your clean slate, Iain.

“So the combination is one, two, three, four, five? That’s the stupidest combination I’ve ever heard in my life! The kind of thing an idiot would have on his luggage!” – Dark Helmet (SpaceBalls)

UPDATE (11 June) – The Times: Not a good day for Grant Shapps, MP (Welwyn Hatfield, C). Shapps, presently helping the Tory effort in the Ealing Southall by-election, appeared to have logged on to the Liberal Democrats’ local YouTube page and pretended to be one of them, commiserating on their impending defeat, and seemingly forgetting that he was logged in under his own usual YouTube account, under the login name “GrantShapps”. Following much ridicule, Conservative Central Office now insists that Shapps was innocent and his account was hacked. By whom? Why?

UPDATE (2 September 2012) – Grant Shapps is STILL a sock-puppeting loser. Years have passed. Nothing has changed.

Tim is the sole author of Bloggerheads.
View all posts by Tim Ireland →
This entry was posted in The Political Weblog Movement. Bookmark the permalink.

19 Responses to "Grant Shapps is a sock-puppeting loser"