I’m not standing for this

Go look for yourself… it starts at 3:47 and actually gets worse:

UPDATE – Still absorbing the video. Waiting to calm down. Have some pertinent information:

The Metropolitan officer, who has his identification number covered up*, appears to slap the woman across the face before taking out his baton and hitting her on the legs.

The incident happened a day after another officer pushed over newspaper seller Ian Tomlinson, who died of a suspected heart attack shortly after.

[*My emphasis. I have been bitching about this very thing for a while now. We have yet to hear anyone from the Met or the CoL police or the IPCC condemning the practice or even expressing concern at the allegations evidence that it is happening.]

Obviously no one gave the Hill Street Blues speech that morning. Or maybe they did and it was like; “Hey, let’s be pro-active out there!”

UPDATE – Oh dear. In the HSB clip I chose, Sergeant Phil Esterhaus doesn’t sign off with his usual “Hey, let’s be careful out there”… instead he uses the alternative; “Let’s do it to them before they do it to us!”

We are looking at a kettling in progress. See the photographer trying to leave at 3:20 (i.e. move from the enclosed area to where the press are free to move…to anywhere but the enclosed area unless they want some, too).

The results speak for themselves. As does the CoL officer who urges the media to turn away from a seeing-to or two with the classic; “There’s nothing to see here, is there?”

Yes, there bloody well is something to see there; a second apparent case of assault involving yet another officer with obscured badge numbers. Even your most gung-ho armchair capitalist would have to admit that it’s not the smartest public relations move, at least.

UPDATE – The angle of the video doesn’t make it clear if he slaps her face or chest, so there may be some debate about that if the far right bloggers out there have sufficient protein left in their bodies to lift their aching arms to their keyboards.

If faced with such a debate, it’s easy enough to settle, because the defenders of kettling would have you think that it has a calming effect. So, keeping in mind that the idea is to keep members of the public calm:

So, where do you want it; face or tits?

(Well, it’s your fault you swore, you little firecracker. You was asking for it, wasn’t ya?) 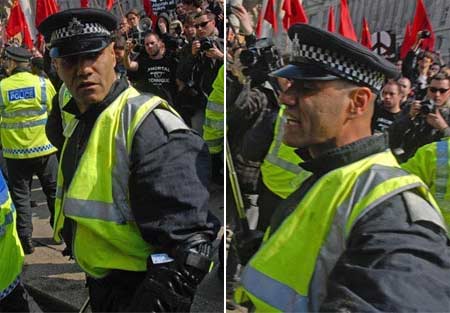 During the afternoon of the 2nd April 2009 on Threadnedle Street near the Bank of England I witnesed the police officer in the photos on this page attack a woman with his telescopic baton. The attack was startling because it was apparently unprovoked. It was also surprising because the police officer concerned is a very large man of perhaps 15 stone, while the woman was very small, perhaps 5’3″ tall. He stepped forwards from a police line and beat the woman hard using both forehand and backhand strokes. I estimate that he hit her between 3 and 5 times. As can be seen in the photographs the officer did not have his number visible. The woman appeared very brave and did not openly show pain.(source)

On YouTube and Indymedia, where these and other photos can be seen, there are a number of claims that this officer’s badge number is or was AB42, but there’s no proof of that at this stage, the IPCC is aware and the need for a man/witch-hunt** is unlikely.

Now let’s hear some noises about how shocking it is that a police officer would hide his/her identity in this way, please. Anyone in authority will do; just a little gasp of disbelief for the cameras and you can be on your way.

UPDATE – As has just been mentioned under comments:

Better. Certainly faster. Not much stronger.

I want to start hearing some seriously reassuring messages about this hidden badge number nonsense. Good to see the Lib Dems at least are asking questions. Now all we need are those answers.

UPDATE (15 Apr) – Pardon me if I seem ungrateful, but it’s about bloody time:

Metropolitan Police Commissioner Sir Paul Stephenson has asked Her Majesty’s Chief Inspector of Constabulary (HMIC) to review policing tactics. Denis O’Connor will conduct the review after two alleged assaults by police during the G20 protests in London… Sir Paul also stressed all uniformed officers must wear shoulder identification numbers so they can be easily identifiable by the public… Sir Paul said: “It is also the case that a number of complaints have been raised in relation to the tactic of containment and as to whether this achieves that balance. I want to be reassured that the use of this tactic remains appropriate and proportionate. Separately, I have already expressed my concern that the video footage of some police actions are clearly disturbing and should be thoroughly investigated. As well as the post-event investigation into those responsible for violence and disorder, I have also ensured that footage in police possession is reviewed to identify any other matters of individual police conduct that may warrant investigation.” He added that uniformed police officers should be identifiable at all times by their shoulder identification numbers. “The public has a right to be able to identify any uniformed officer whilst performing their duty.”

9 Responses to "I’m not standing for this"