The Rally To Restore Sanity is a cheap, populist campaign by some upstarts in America with a popular television show (The Daily Show). It is now apparent that this rally may actually go global, with people marching in major cities across the world this Saturday 12pm midday (local time) on 10.30.10 30.10.2010

Currently, under British law it is forbidden for you to stage a demonstration in or near Parliament and other designated areas without prior permission from police (ideally, six days in advance). A repeal of the relevant part of the SOCPA act has been in the works since before the last election, but we are not sure at this time where the present coalition government stands on this.

I suspect some people who seek to follow the crowd like sheep and involve themselves in The Rally To Restore Sanity may wish to stray inside a designated area without permission, or perhaps even target Parliament itself.

I have subsequently applied for (and received) police permission to stage an urgent demonstration to protest outside Parliament against any violation of this law, and in support of protecting the law as it stands: 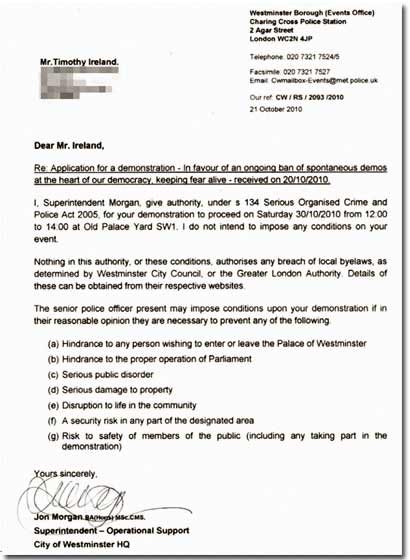 I ask you; what reasonable person would make their way down to Parliament on short notice expecting to be taken seriously?

I call on you to join me this Saturday to take stand against such people:

The law is the only thing that stands between us and absolute chaos. We can’t have people marching on Parliament at a moment’s notice. We need the threat of arrest to keep them at bay. Perhaps a little kettling if they try to stare us down. Something that’ll make them think twice, at any rate.

In fact, I want you to overcome your fear of fear. I want you to campaign for the careful and responsible use of fear in the defence of our democratically-elected leaders! (Can I get an ‘amen’?)

Old Palace Yard is in Westminster, here, under the shadow of the Jewel Tower It’s right by the place where journalists do their pieces to camera outside Parliament, but we’ll try not to get in their way.

You must wear black. You may dress in a scary costume if you wish, even if it seems a peculiar and rather American thing to do, but I must insist – as the keeper of the authorisation document – that you dress in a uniformly black ensemble. So that leaves… witches, the Grim Reaper, cat-women, Catholic priests, that chap from the movie ‘V for Whatever’, or perhaps my own personal choice; a sensible suit with a sturdy but tidy overcoat and a nice briefcase that really tells those workshy scroungers that you mean business. Perhaps a nice black shirt to set it all off. Yes, that’s the ticket.

I can be contacted via the usual email facility and Twitter if you have any questions (the relevant hashtag and link: #KeepFearAliveUK and http://j.mp/KeepFearAliveUK). If you need to find me at the event, I’ll be the one wearing the black armband.

Because we don’t want to be going too far ourselves and free-wheeling on the placards at short notice or anything untoward, I’ve made some pre-prepared ones that you can print out on any printer as A4, then soberly enlarge to A3* at work, (or your local newsagents or post office if you’re an elderly). A limited number of regulation-size placards will be available in exchange for a £1 £2 donation, with proceeds going toward a large screen something or other.

(*Please advise me if you plan to enlarge your own poster to A2 or above, as I will need to clear it with the committee. Please also get in touch if you want to join the committee.)

(Credible lobbying organisations like Christian Concern for our Nation understand the value of uniform placards. Take a look and see them in action.)

You may have noticed that things have been changing recently and some developments are not to everyone’s liking. People have been gathering near Parliament and making ugly noises about the sincerity of the government’s actions regarding some rather harsh cuts, for example. But, as you all know, the cuts are very necessary, entirely the fault of the previous administration, and nothing can be done to stop them.

If Thatcher should die suddenly of being very old, and the £3million+ budget for the planned state funeral became a matter for debate, obviously it would be a time-sensitive issue and a lot of people worried about the expenditure in these times of austerity would want to march on Parliament and complain about the money before it is spent, and I would understand their sense of urgency to a point, but there are limits. Who do some of these people think they are? You can’t just walk up to Parliament and demand answers without permission.

Worse; some of these people have had jobs to get on with, or should be doing something useful or quiet with the time we pay for on whatever benefits scam they’re running.

Something really must be done about the people who expect to be able to walk up to Parliament any time they like and make a fuss over things we cannot change. Further, these people do not understand that they are concerned about things that clearly aren’t important, or are going to happen whether they like it or not. They don’t comprehend that they should simply take their lumps and go away, or at least try to roll with the tide. In fact, I am beginning to wonder if something might be wrong with them, and I’ve half a mind to report some of them to police, even if they don’t turn up on Saturday. I’ve heard tell that these same people send vile and abusive messages, and set up foul and disgusting websites objecting to all sorts of perfectly reasonable things.

PRINT AND DISPLAY A FLYER!

As you can see, I have a more enlightened outlook since we last spoke about this and have moved on from my previous (naive and uninformed) view on SOCPA, and I urge you to not only join me, but also inform your colleagues by putting this poster up at your place of work:

(Once you have displayed your flyer, make sure you also send an internet email around your office or update your Facebooks so everybody knows about the stand you are taking for democracy!)

(Please be aware that video footage may be recorded at this event. Persons carrying unauthorised, off-topic placards risk arrest.)

Tim is the sole author of Bloggerheads.
View all posts by Tim Ireland →
This entry was posted in The War on Stupid, Tories! Tories! Tories!. Bookmark the permalink.