This evening, the 6pm edition of Anglia Tonight carried the following report about the excuses Nadine Dorries gave for lying to her constituents. If you’re in a hurry, just click here to zip forward to the relevant quote (orig):

Ms. Dorries agreed to do an interview for us and was unable to make it for whatever reason, but (I spoke to her) on the phone and what she said was that, following the expenses scandal that we saw, she found herself at the centre of some rather unwanted attention from some rather unsavoury people – ‘stalkers’, she called them – to the extent that she had to report 4 people through the Metropolitan or Bedfordshire police and she said to me; “I’d be a pretty stupid MP after reporting four stalkers to the police if I then put down exactly where I was staying.” – Matthew Hudson, Anglia Tonight (21/10/2010)

So Dorries maintains that she told lies on her blog about where she was staying and when to throw stalkers of the scent, and began doing so when she attracted “unwanted attention” from “unsavoury people”… (important bit coming up) following the expenses scandal.

The expenses scandal began for Nadine Dorries with this report in the Telegraph on 15 May 2009.

And here are the dates of the blog entries mentioned in the Standards and Privileges Committee report (PDF) that she explains away as ‘fiction’:

Dorries apologised for misleading her constituents about where she lived in this entry on her not-really-a-blog on 16 May 2009.

Apparently, we’re supposed to believe that in one day – on 15 May 2009, to be precise – Nadine Dorries not only attracted four stalkers, but then made credible reports to police about all four of them (in London and Bedfordshire), then went on to receive advice from police that convinced her that she should publish largely fictional accounts on her blog about where she was living/staying, then did so, and then went on to apologise for doing so the very next day.

At the time of the expenses scandal, I catalogued relevant entries on her blog that gave the very clear impression that she was living in her constituency, and the dates of key examples are included below:

“I got the papers at seven and read every one back to front. Sky sent a car for me and I read all the way from Woburn to Islington…” – 26 February 2007

Dorries was declaring her intention to move to Woburn as far back as 2005, and blogging as if she were residing mainly in her constituency from 2007.

Even if she were dealing with a stalker problem back in 2007 (care to revise your statement, Nadine?), those phantom stalkers of hers would still need a time machine to intercept her, because she was blogging her movements after the fact.

In response to your first point on where you spent your weekends, I know that there have been a number of statements on your blog. The blog itself seems now to have been taken down. – Letter to Ms Nadine Dorries MP from the Commissioner, 8 July 2010

And who did Nadine Dorries blame publicly for the removal of her blog? Why, the stalkers, of course!

But the truth is that Dorries published the misleading content before any concerns she claims to have had about stalking. The relevant accusations of stalking, by the way, also involve several works of fiction, including an outright lie about my being investigated by police for stalking her (and other MPs) that she has yet to answer for. (Never mind 75%; what Dorries told a room full of people in May of this year was 100% fiction.)

By Dorries’ own account to the Commissioner, she deliberately gave a false impression of where she was staying for entirely political reasons (not including this belated attempt to blame the Telegraph, which itself raises time travel issues):

I often posted comments on my blog relating to [name of town] in my constituency. Since I first rented in the constituency, I made a song and dance about being at the property. I have mentioned it on my blog a number of times. This was done to comfort my Association. The previous MP only visited the constituency occasionally—sometimes only as often as once every six weeks—and they were keen that I reversed that impression. His lack of time in the constituency contributed to his de-selection. – Letter to the Commissioner from Ms Nadine Dorries MP, 25 January 2010

In the resulting report, the matter of why she lied about where she lived is reported as follows:

157. Some material on Ms Dorries’ weblog appears to suggest a pattern of use of her constituency property in some respects at variance with the evidence she has given, in that it implies she has a more permanent presence in the constituency. Ms Dorries’ evidence is that she gave prominence on the blog to her use of her constituency property both to comfort her constituency association and to demonstrate to her constituents the degree of her personal commitment to her Mid Bedfordshire constituency. Her evidence as to the reliance to be placed on material on her blog is that it is in fact 70% fiction and 30% fact, and relies heavily on poetic licence. She frequently replaces place-names, events and facts with others. She is conscious of the potential for political opponents to exploit her personal domestic circumstances. According to Ms Dorries, this, and the need to reassure her constituents of her commitment, was the reason behind the blog entries. It was also an attempt by her to retain some degree of a private life. – Appendix 1: Memorandum from the Parliamentary Commissioner for Standards

Note that none of this mentions stalking in any way; false accusations of stalking are a very recent addition to Nadine’s growing catalogue of outright lies (more).

To close, here’s a little treat for the good people at Anglia Tonight:

Matthew Hudson was reporting live from outside Parliament just after 6pm. In this screen capture, you can even see the time on the clock tower behind him as he says; “Ms. Dorries agreed to do an interview for us and was unable to make it for whatever reason” 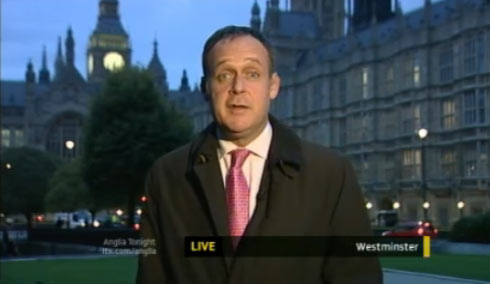 Now here’s a photo that Nadine Dorries tweeted at 6:20pm. It clearly shows the time it was taken – 6:18pm – because it is a picture of a clock tower… the same clock tower (for those who don’t recognise it): 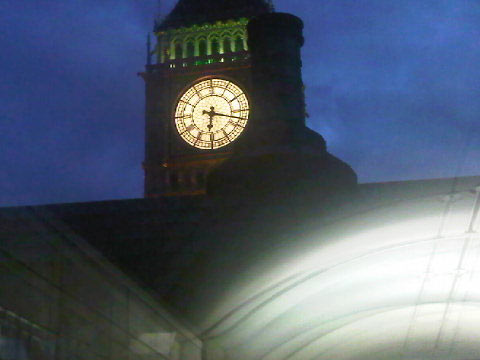 Obviously Nadine Dorries had other places to be (if nothing better to do) at the time… while sitting about a block away.

That deserves another screen capture, IMO. I think this one will do nicely: 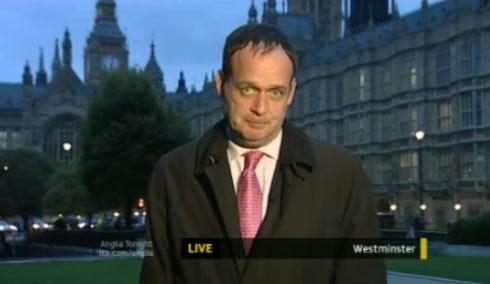 [Psst! Nadine Dorries! You are in a very deep hole. Even if you care nothing about the safety of my family, for the sake of your own career you really need to stop digging. You are not clever enough to tell convincing lies, and lies of this magnitude have a way of exploding in people’s faces.]