To follow this recent post about John Lennon, and in response to the perfectly formed announcement of Andy Coulson’s complete and total innocence, I thought I would blog something about true friendship, because I’ve seen evidence that it can exist between tabloid scum and (some) public figures…

Andy Coulson, the former editor of the News of the World, said on Friday he was on friendly terms with the senior police officer who oversaw a criminal investigation that sent one of his reporters to prison for hacking into the mobile phones of the royal household.

Giving evidence to a Scottish criminal court, Mr Coulson said he remembered having tea with former assistant commissioner Andy Hayman and “may well have had lunch with him” as well.

But he denied that he had been in possession of personal information about the officer that the News of the World could have used to prevent Mr Hayman mounting a thorough investigation of the scandal.

Of course he didn’t have dirt on the man; that’s not how friends behave.

Let me show you how friends behave:

In 2005, Andy Coulson was editor of News of the World, and Andy Hayman was head of Specialist Operations, leading the investigation into the London bombings of July 2005.

An innocent man by the name of Jean Charles de Menezes was shot on Hayman’s watch. Here’s how Andy Coulson shaped the response: 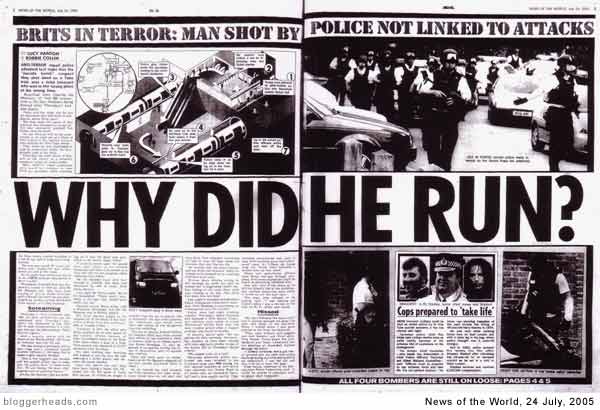 Click for hi-res if you wish to read the full article.

As you can see, the headline doesn’t read ‘police kill innocent man’; instead, it offers readers a decidedly (ahem) loaded question. The article also seeks to lead the public with a series of mitigating circumstances that would go some way to excusing what police had done… if any of it were true:

– The article states as fact that Jean Charles de Menezes was wearing “a bulky winter coat despite the warm weather” (i.e. something conspicuous that might have hidden a bomb belt). He wasn’t.

– The article states as fact that the police shouted a challenge to Jean Charles de Menezes “screaming for him to stop”. They hadn’t.

– The article states as fact that Jean Charles de Menezes then “made the decision that cost him his life” and “vaulted over the ticket barrier and ran down the escalator”. He didn’t.

As you can see, when police shot an innocent man and Andy Hayman’s arse was on the line, Andy Coulson acted like a true friend; rather than rely on any of the investigative journalism that News of the World is supposed to be famous for, Coulson chose instead to take a friend at his word and not bother looking at or into any of the pesky detail.

When it was suspected that News of the World had targeted hundreds if not thousands of innocent people and Andy Coulson’s arse was on the line, Andy Hayman acted like a true friend; rather than rely on any of the investigative skills the police are supposed to be famous for, Hayman chose instead to take a friend at his word and not bother looking at or into any of the pesky detail:

Here’s the riddle. If the Guardian, the New York Times and Channel 4’s Dispatches can all find numerous journalists who worked at the News of the World who without exception insist that the newspaper routinely used private investigators to gather information by illegal means, why can’t Scotland Yard find a single one who will tell them the story?

In their original inquiry into the phone-hacking affair, in 2006, detectives arrested the paper’s royal correspondent, Clive Goodman, and charged him with listening to messages on the royal household’s mobile phones. Goodman refused to answer questions.

Scotland Yard then interviewed not one single other journalist, editor or manager from the paper. Detectives took this decision despite holding evidence that – we now know – clearly identified other News of the World journalists who were involved in handling illegally intercepted voicemail.

In their recent inquiry, which ended fruitlessly last week, they attempted to interview only three journalists, all of whom were identified for them by news organisations.

They approached those three not as witnesses but as suspects, warning them that anything they said could be used to prosecute them: two gave interviews in which they declined to answer questions; the third challenged them to arrest him in handcuffs, and so they never even spoke to him.

There are some who might describe this as something dangerously close to corruption, but obviously such people are reactionary leftist scum with an anti-Murdoch agenda…. the same type of people who would dare to raise an eyebrow at Hayman later leaving the police to work for News International as a columnist.

Clearly, what we are looking at here is nothing more than innocent goodwill shared between two men who know and trust that their good friend is on the level. Surely this is a quality to be applauded in these deeply cynical times.

*See also: Bloggerheads – News of the World vs. Big Society: snakes in the grass

Tim is the sole author of Bloggerheads.
View all posts by Tim Ireland →
This entry was posted in Old Media, Rupert 'The Evil One' Murdoch, Tories! Tories! Tories!. Bookmark the permalink.