EXCLUSIVE: News of the World and the ‘hacking’ of Danielle Jones

Yesterday, the Telegraph published a database of News of the World articles relating to phone/text messages, including the Dowler article I blogged about yesterday morning. Like me, they’ve been doing some research at the British Newspaper Library in Colindale, and I applaud their efforts, but their collection is short one vital article, which enters the public domain this morning for the first time since it was originally published by News of the World on July 15, 2001.

Before you read this article (in the scan/graphic below), I ask that you consider the following:

1. Rebekah Wade/Brooks and Andy Coulson have repeatedly sought to shelter themselves behind a denial that they were not aware of what was going on in their own newsroom. As so many of the smoking guns have been relatively minor/diary pieces in the back pages, this tactic has been largely successful, if a little pyrrhic (i.e. leaving Wade/Brooks and Coulson in a position where they are merely incompetent as far as anybody knows, and not corrupt).

2. Scotland Yard confirm that Danielle Jones’ name and/or other details are included in relevant evidence held by police. This is just one published source:

The investigation into the death of Essex teenager Danielle Jones could be re-examined after the inquiry into the voicemail hacking scandal found that mobile phones linked to her may have been targeted by a private investigator working for the News of the World…. (Chris Bryant) told the Commons yesterday that evidence suggesting Danielle’s phone and others linked to her were targeted by Mulcaire had been discovered by Operation Weeting, the inquiry into phone hacking. Police sources confirmed details of the phones had been found and said the information was being assessed for potential impact on the original murder investigation. – Independent, 7 July 2011

Which leads us neatly to…

3. The prosecution of the killer of Danielle Jones relied a great deal on evidence involving falsified text messages sent from Danielle’s phone by the murderer (context). If staff from News of the World are found to have compromised or undermined this evidence in any way, it could conceivably lead to a challenge against the relevant conviction.

Now, take a look at the scan of the original article (below), which (a) dominated Page 11 of the newspaper, (b) is clearly based on text messages sent to Danielle Jones’ phone, (c) makes that same point ab-so-lute-ly clear in a headline that you would have to blind – or on holiday – to miss, and (d) appears to actually express disappointment that police would not allow the release of further/outgoing messages!

It is also hard to see what ‘public interest’ defence exists for the publication of these texts. It appears to me to be an entirely emotional element that served no other purpose beyond sensationalising an already traumatic event.

We are expected to believe that editors were not aware of any of this, before or after publication. This is a claim I reject, especially now that I have seen this evidence. It is also highly unlikely that Essex Police failed to raise the issue of the sensitivity of text messages with editors, because their concerns about the importance of text messages as evidence are right there in the article approved for publication.

Rebekah Wade/Brooks and/or Andy Coulson cannot have been unaware of this published article, or its origins, or of the dangerous implications. If they were given no specific warning about the use and potential consequences of ‘hacking’ by Essex Police, then serious questions need to be asked about their competence.

[Click here if you would like to fund more independent research into this story and associated tabloid shenanigans.] 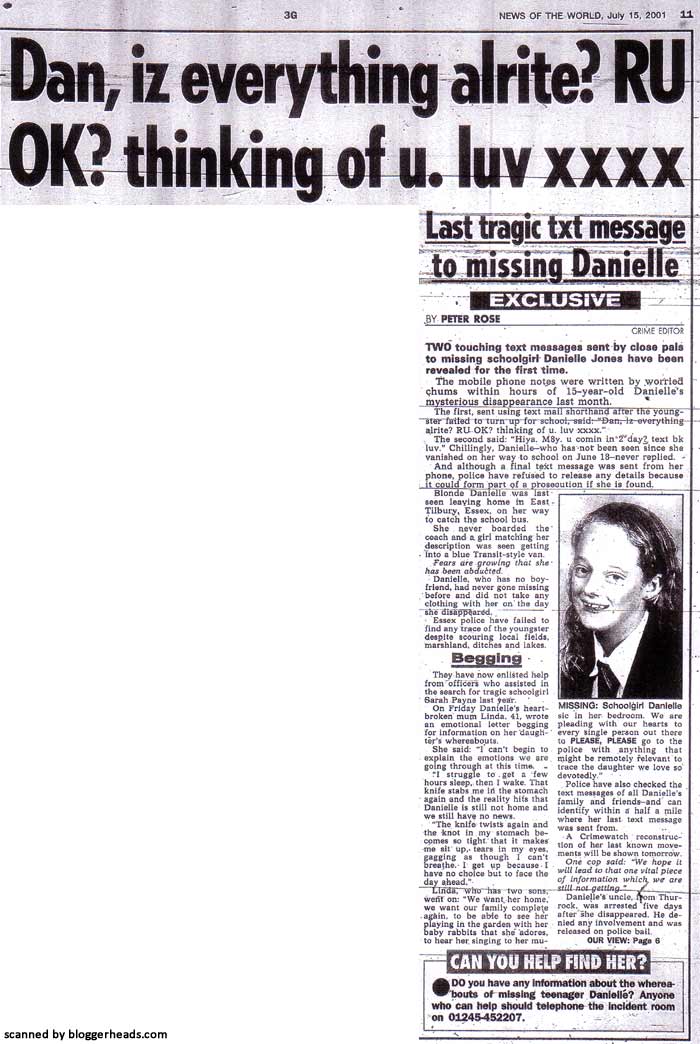 Tim is the sole author of Bloggerheads.
View all posts by Tim Ireland →
This entry was posted in Old Media, Rupert 'The Evil One' Murdoch, Tories! Tories! Tories!. Bookmark the permalink.

6 Responses to "EXCLUSIVE: News of the World and the ‘hacking’ of Danielle Jones"