News of the World: a wake-up call for certain Conservatives

This entry was posted on
Friday, July 15th, 2011 at
8:48 am and is filed
under Old Media, Rupert ‘The Evil One’ Murdoch, The Political Weblog Movement, Tories! Tories! Tories!.

Some people in politics can be really funny about evidence… Westminster/media groupies especially so. It is not unknown for some ‘commentators’ to be so far into the role of propagandist that they will accuse personal/political enemies of criminality on nothing more than hearsay while refusing to even acknowledge solid evidence against those they support personally/politically.

(I’m sure I don’t need to name names, but I will say that, no, some apologies will never satisfy… but only while they remain half-hearted and self-serving because you’ve still got your head up your arse, you great big lumbering dipshit.)

That said, I would like to make it clear that the following is only an indicator of guilt, but it is a strong one that follows an emerging pattern; News of the World stories that claim/imply that ‘friends’ or ‘pals’ are the source of a story, when in fact the source of the story is intercepted/illicitly-accessed messages from mobile phones.

The item about Prince William that led to the conviction of Clive Goodman and Glenn Mulcaire was just such a story, and the mistake Goodman made was to print something that could only have come from illicit interception of phone messages.

Many other such stories had earlier escaped attention because of a lingering doubt about ‘friends’ and the widely-recognised need to protect sources. On this point, I refer to the words of Gordon Brown:

“… News International who took the freedom of the press as a licence for abuse, who cynically manipulated our support of that vital freedom as their justification, and who then callously used the defence of a free press as the banner under which they marched in step, as I say, with members of the criminal underworld.” – Gordon Brown, 12 July 2011

Basically, if the newspaper claimed or implied that the source was a friend/pal and there was potentially more than one source, all the newspaper had to do was refuse to name the source, and the target was left with nowhere to go. In other words; a blatant abuse of freedom of the press to disguise criminal activity conducted by newspaper staff.

The repeated success of this defensive rampart appears to have led to a situation in the News of the World newsroom especially where confidence was so high that ‘journalists’ would make overt reference to phone calls and text messages in articles resulting from illicitly-sourced leads. This article about Danielle Jones is a stark example, and this Liz Hurley item is typical of the celebrity articles I’ve seen that appear to follow this pattern.

(Psst! A WHOPPER of a celebrity example will follow later today. Think big. No, bigger. OK, now multiply that by three.)

So, with all of that in mind, I hope that this is the moment that some especially pigheaded Tories finally start to come around on this to the point of admitting that they didn’t just get it a little bit wrong because they weren’t aware of recent evidence, but that they got it very, very wrong because they wilfully turned a blind eye to available evidence and didn’t bother looking for further evidence: 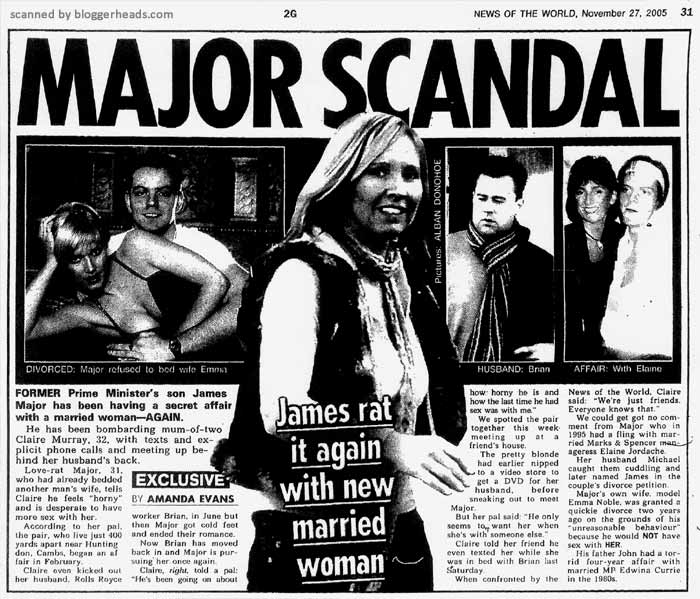 That challenge may seem odd to the casual reader, but there are some people in this world who are so tribal that even when innocent victims are involved, they won’t come fully on board until one of their own is involved.

I mean, FFS, all of this stuff is just sitting in there in the British Newspaper Library, just waiting to be found, and even now there’s only me and maybe two or three newspapers showing an interest in the material. Where are all these Conservative bloggers who brag about leading the way every chance they get? Instead of asking where the evidence is, perhaps now some of these Tories might finally be convinced to start looking at it… or start looking for it.

[Note – As with other items recently published on Bloggerheads, this article does not appear in the database of NotW articles recently released by the Telegraph. This is the first time this article has seen the light of day since it was originally published by News of the World in November 2005. This story results from original research I conducted into the friendship between Andy Coulson and Andy Hayman and associated ‘hacking’ issues, and if you would like to fund more independent research into this story and others like it, please open your virtual wallet and click here.]

Tim is the sole author of Bloggerheads.
View all posts by Tim Ireland →
This entry was posted in Old Media, Rupert 'The Evil One' Murdoch, The Political Weblog Movement, Tories! Tories! Tories!. Bookmark the permalink.

2 Responses to "News of the World: a wake-up call for certain Conservatives"