Holy cow! It looks like News of the World ‘hacked’ the phone(s) of Brad Pitt, Angelina Jolie, and/or Jennifer Aniston! 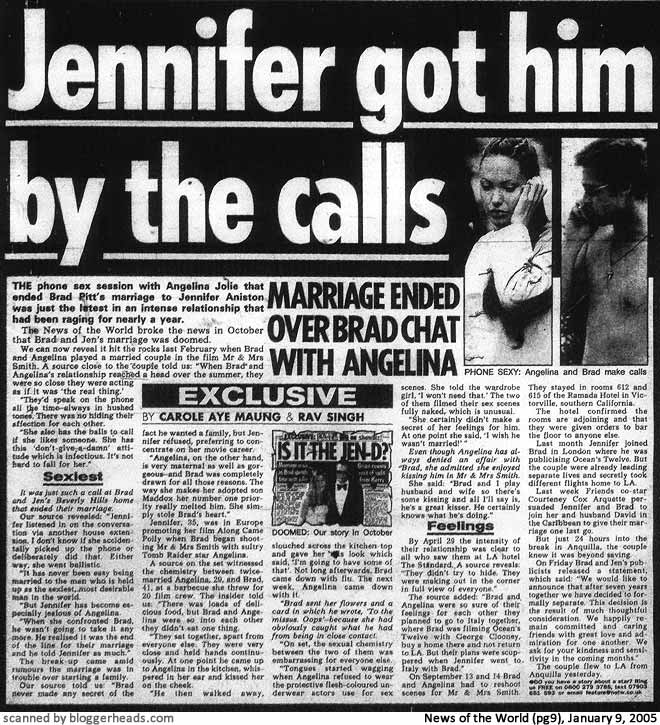 1. As I have already noted, if we are to hope to hold News Corporation to account for the conduct of newspapers operating under subsidiary News International, then what we need are victims of phone ‘hacking’ who are US citizens (or even, at this stage, US citizens who are potential victims). Given the enormous monetary/legal resources Rupert Murdoch has and the political influence he retains despite this massive scandal, it is preferable that these victims have ample resources and access to legal Rottweilers. So, if you’ll pardon the arrogance of my onomatopoeia; Boom.

2. Speaking of legal Rottweilers, I have already written about the pattern of celebrity stories that claim to be based on leaks from ‘friends’, but appear instead to have been based on illicitly-accessed phone messages, but I think News of the World would have been far more wary of basing a scoop solely/obviously on Brangelina’s phone messages than they would have been with your average citizen (and with good reason; the couple sued the newspaper over a later article in 2010). I suspect News of the World staff/editors retained most of what they discovered through this route and did not publish the usual level of detail until after the Pitt/Aniston break-up was public knowledge and there were enough actual blabbers around (i.e. in the bitter dispute that followed) to provide adequate cover. I expect I’ll know more once I get my hands on that October 2004 item mentioned in this article. 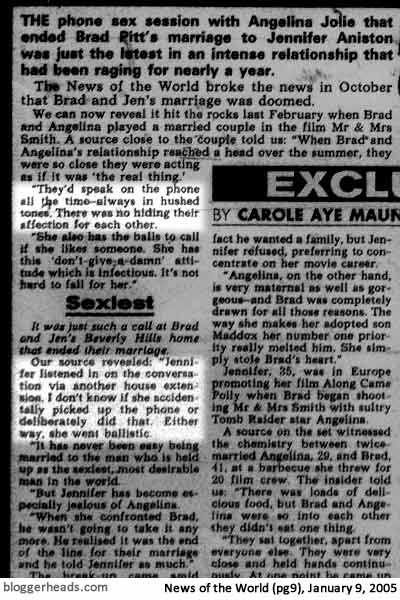 4. Like the Danielle Jones article, this item is not only prominent (Page 9), it makes specific reference to phones. We are expected to believe that then-editor Andy Coulson somehow missed this or looked at this item (knowing the pronounced risks of litigation) and did not make any enquiries about the source.

5. Hell, if you’re the speculating type, try to imagine Glenn Mulcaire listening in to this break-up of a leading celebrity couple, and then try to guess who he might speak to about this dynamite story. Personally, if I were a greedy tabloid scumbag, I’d be talking directly to the editor if not passing on messages about how many extra zeroes this one would cost.

6. Later today, I’ll get in touch with Brad Pitt & Angelina Jolie’s London lawyers, Schillings. I’m ‘known’ to these lawyers, you know… for something completely different!!! (Sorry. Private joke. Moving on.)

7. I do hate to go on and on like a poorly-compressed MP3, but this revelation is the result of wholly independent research, and if you’d like to make sure that I have the time/funds/capacity to do more, then please donate today:

Cheers all. If there’s enough money in the kitty by early this afternoon, I can start making immediate plans for another jaunt into the British Newspaper Library early next week.

Tim is the sole author of Bloggerheads.
View all posts by Tim Ireland →
This entry was posted in Old Media, Rupert 'The Evil One' Murdoch. Bookmark the permalink.