Kelvin MacKenzie and the 1988 ‘Brighton: Town of Shame’ editorial

This entry was posted on
Thursday, September 13th, 2012 at
8:13 am and is filed
under Christ…, Humanity, Old Media, Rupert ‘The Evil One’ Murdoch, Tories! Tories! Tories!.

There is a major discussion pending about collusion between police/authorities and the tabloid element that brazenly exploits and corrupts them. I speak not just of Hillsborough but a variety of instances in recent times (example). However, today you will have to settle for some mere fact-checking from this little black duck.

Last night, hundreds of people were on Twitter discussing the merits (or otherwise) of Kelvin MacKenzie, and this graphic turned up of an editorial allegedly penned by MacKenzie in his capacity as editor of The Sun in 1988*: 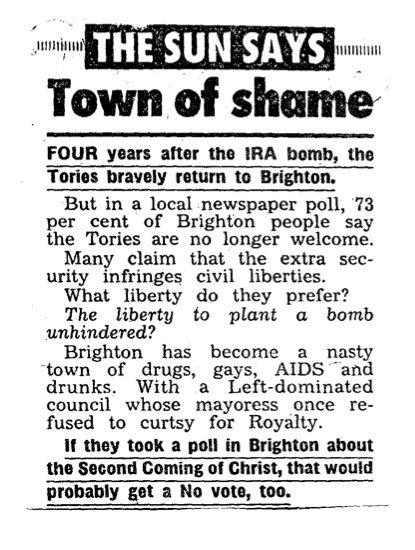 I used TinEye to locate this instance of the same graphic/editorial, and it cites a local source (Peter Crisp) who would be entirely likely to keep and distribute material like this.

One might simply ask Kelvin MacKenzie and/or someone at The Sun but I expect they’re all very busy hiding under the bed at the moment, so please drop me a line (email), tweet at me (@bloggerheads) or comment (below/reddit) if you think you can help me to determine the authenticity of this editorial.

(Also, drop me a line if you’ve any word on the alleged second coming of Jesus of Nazareth, especially if you know the venue, as I want to book early for a good seat. If I’m going to heckle, I want to do it from the front row.)

[*In October 1984 the IRA bombed the Grand Hotel in Brighton during the Tory conference with the intention of assassinating then-PM Margaret Thatcher and/or members of her cabinet. The Tory conference returned to Brighton in 1988.]

[Psst! If you’re not in a position to help today, you can still do something nifty on Twitter. Drop @kelvinmackenzie a friendly word; the poor chap’s been widely mistaken for a former editor of a certain barrel-scraping tabloid.]

Tim is the sole author of Bloggerheads.
View all posts by Tim Ireland →
This entry was posted in Christ..., Humanity, Old Media, Rupert 'The Evil One' Murdoch, Tories! Tories! Tories!. Bookmark the permalink.