Page 3 and the ‘News in Briefs’ lie exposed

Last week Rupert Murdoch’s tabloid flagship The Sun finally brought an end to the shameful practice of using Page 3 models to sell the opinions of senior editors to readers as if they were their own.

This practice began under the since-disgraced editor Rebekah Wade – now Rebekah Brooks, soon to be inmate #5318008 if I’m any judge – but rather than let it die with her career, Dominic Mohan saw fit to let it drag on for nearly 4 more years under the pretence that it had all been a clever bit of post-modernism (i.e. before he was suddenly removed as editor for reasons that I am sure will become clearer to us as time goes by).

I am here to refuse Brooks, Mohan and other intellectual cowards the luxury of a neatly rewritten history.

‘News in Briefs’ was no joke, and my leading example from February 2004 needs no explanation. It is stark, it is real, and it is a perfect example of how sincere Rebekah Wade/Brooks was in her efforts to use topless models to push political propaganda, and how deeply she and others invested in it: 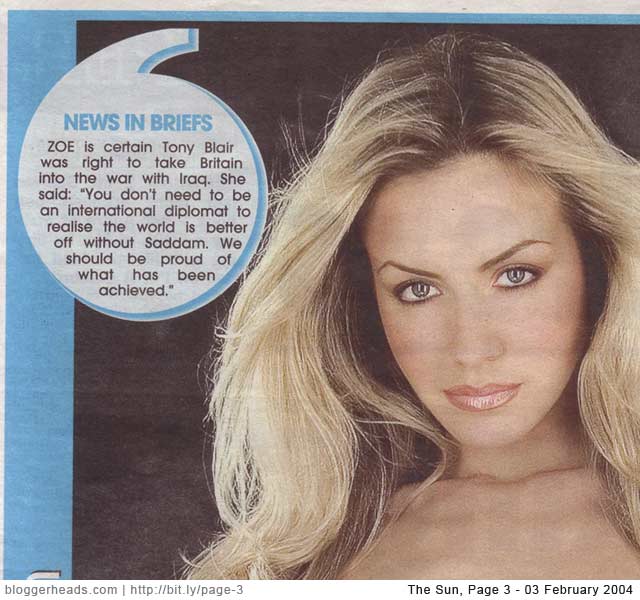 These further examples paint a more complex but no less compelling picture. They date from August 2004, when David Blunkett’s reign as Home Secretary was about to end in ignominy over issues surrounding his affair with Kimberly Quinn.

Blunkett was balls-deep in the kind of ‘love rat’ and corruption scandal that tabloids normally go nuts for, but in this case, the subject of the scandal was not only politically-aligned with then-editor Rebekah Wade/Brooks, but a personal friend to boot.

What usually happens in cases like this is that the damning details are played down or not explored at all. Meanwhile, the feral enthusiasms one normally expects from tabloids are diverted into undermining critics/accusers while sympathetic editorials paint the besieged ally in as positive a light as possible.

In this case, the editorials extended onto Page 3, and praised three distinct Home Office initiatives over three editions (the Friday before the scandal broke cover, and the Monday and Tuesday following): 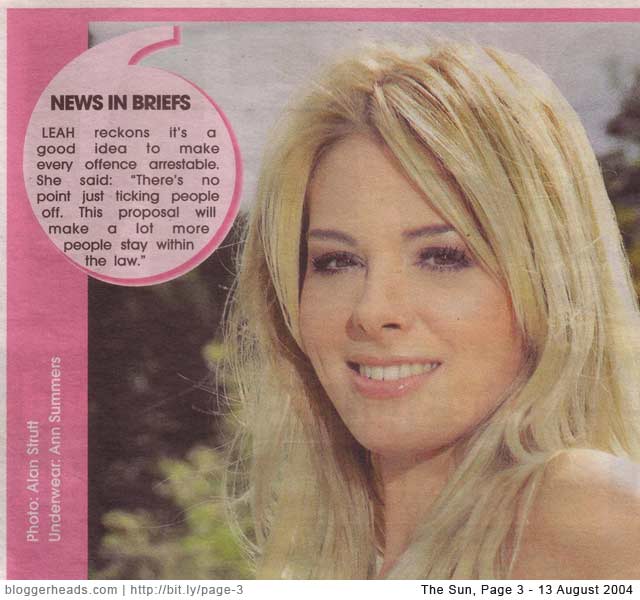 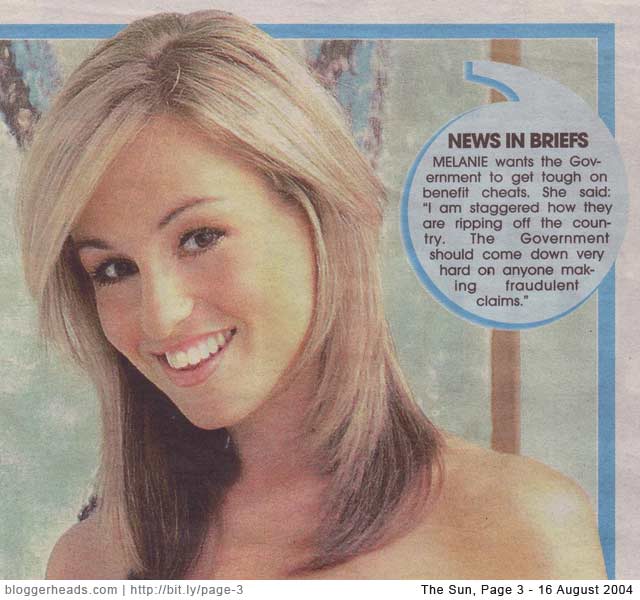 She has yet to admit to any of this (or anything else, for that matter), but I remain confident that these editorials were strategically placed by then-editor Rebekah Wade/Brooks in order to better service her friend and political ally David Blunkett, and not the result of any topless model(s) spontaneously deciding that they would use the empowering platform of Page 3 to express their admiration for the work of the beleaguered Home Secretary.

That said, there is an outside chance that this was a genuine and spontaneous outpouring of emotion following the first of two resignations: 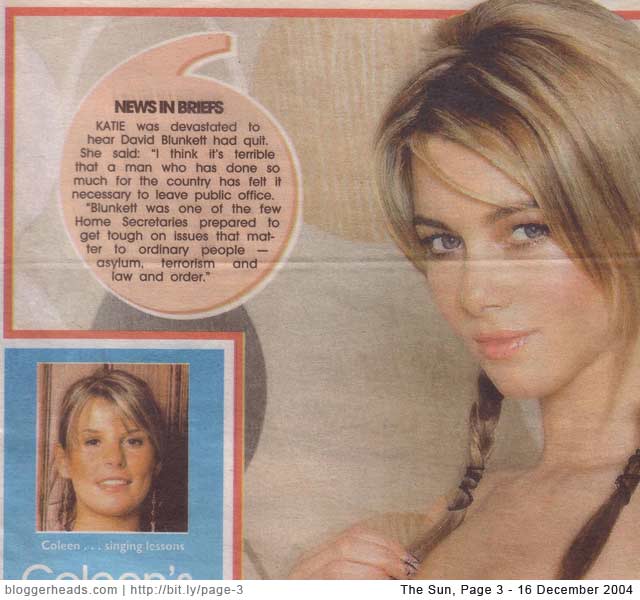 Those not wanting to see what happened after Blunkett’s second resignation should look away now.

‘News in Briefs’ editorials were not designed for shits and giggles, folks. They served a very real political purpose, they exploited Page 3 models way beyond any concerns about pornography*, and I’m damn proud to have campaigned against the practice for as long as I did.

See also: This video explains the situation in more detail and this video (NSFW) contains many, many examples

Tim is the sole author of Bloggerheads.
View all posts by Tim Ireland →
This entry was posted in Page 3 - News in Briefs, Rupert 'The Evil One' Murdoch. Bookmark the permalink.