MAJOR UPDATE (18 Jan 2017) – I have changed the headline to include the name of the person who invented this lie and then lied to me about it being an error by a staffer. Cameron Harris was today unmasked by the New York Times, and you can read all of the pathetic excuses he gives for his behaviour here.

“Whoever walks in integrity walks securely, but he who makes his ways crooked will be found out.” – Proverbs 10:9

For a long time now, Donald Trump and his supporters have been making a series of excuses about stolen elections and broken microphones for reasons that are easy to guess at. Trump himself is championing an ‘election observers’ recruitment drive that I personally suspect is going to result in a similar vibe one gets from ‘vigils’ outside abortion clinics.

Recently the Christian Times published a story claiming that someone had found solid evidence of a Democrat plot to ‘steal the election’ in Ohio:

BREAKING: “Tens of thousands” of fraudulent Clinton votes found in Ohio warehouse (September 30, 2016) – Election officials in Franklin County, Ohio are reportedly stumped over what one maintenance worker found in a dilapidated downtown Columbus warehouse earlier this week. According to sources, Randall Prince, a Columbus-area electrical worker, was doing a routine check of his companies wiring and electrical systems when he stumbled across approximately one dozen black, sealed ballot boxes filled with thousands of Franklin County votes for Hillary Clinton and other Democrat candidates.

The author is very clear on what this alleged evidence indicates:

…it now appears that Clinton and the Democrat Party planned on stealing the state on Election Day.

The story has already been promoted widely by Trump supporters, including this one who runs a major ‘fan’ account called @RealDJTrumpTeam (“The Original DJ Trump Fan Twitter Page!!! Let’s Make America Safe and Great Again!!!”).

CRITICAL NEWS!
Wake up (if any real) #HillaryClinton lovers! You can't make this stuff up!!! @realDonaldTrump https://t.co/kwqHqvarkR

A variation of the classic ‘you couldn’t make it up’ line is there, and in my experience, you can usually find this wherever someone is making stuff up (see also: ‘Nothing up my sleeves!’) and this is no exception.

Here’s the main photo from the article, including its caption: 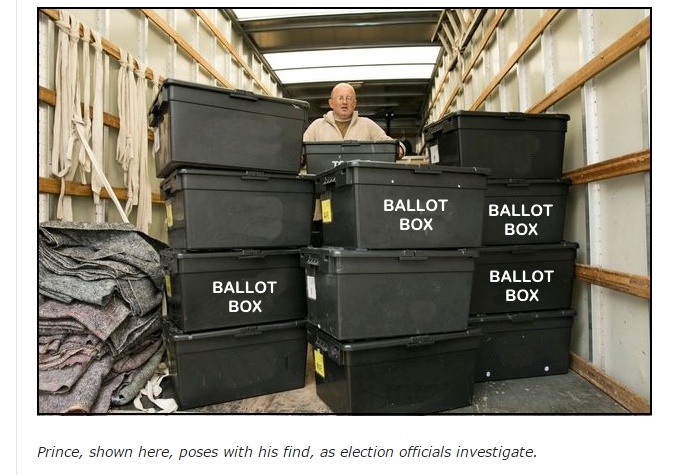 I can tell you with a high degree of certainty that this isn’t an image of Randall Prince from Franklin County Ohio, but instead a photo of an unnamed member of electoral services staff in Sheldon Heath, Birmingham (UK).

How can I be so sure of all of this? Because the good people at the Christian Times have rather foolishly used a stock image and claimed it is a genuine photograph of the alleged discovery alongside the primary witness in their story (link to original): 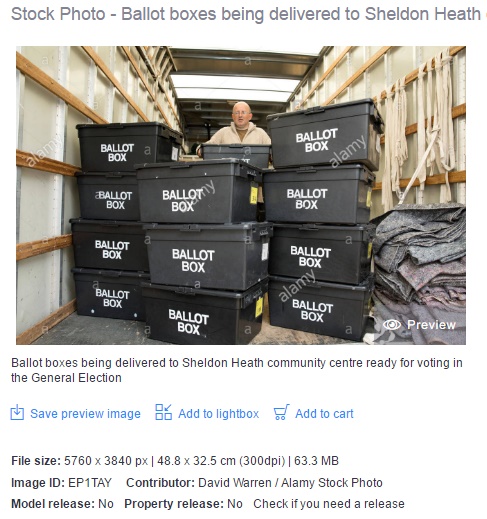 For the doubters, here’s another image from the same series (link to original): 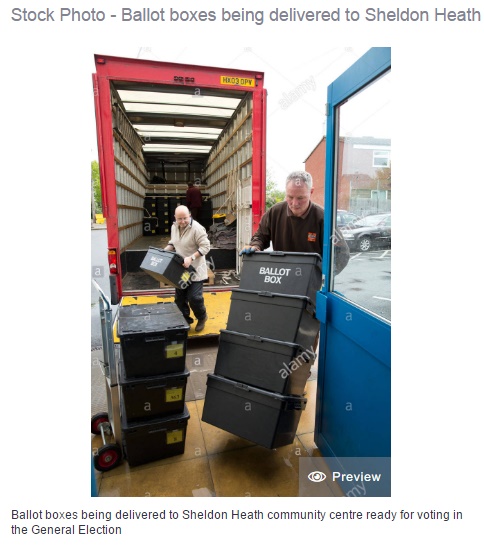 See that blue door and the adjacent building? You can inspect those for yourself by making a quick streetview visit to the Sheldon Heath Community Centre…

If the publishers of the Christian Times plan on claiming this was an editorial accident that does not impact on the central allegation, they need to explain why the image was reversed in a clumsy attempt to foil an image-based search.

(NOTE – This is why the ‘ballot box’ text looks so poorly photoshopped in the Christian Times version of this image: someone had to transplant and reverse the text, and clearly struggled to do so on all of the boxes.)

Seriously, you are being had. All politicians lie, but there are many things that you take to be a certainty that are not only lies, but some of the boldest lies I have seen in politics for many years: this is a measure of the level of contempt that Trump and his backers have for you.

I realise that this is a difficult thing to accept. You’ve made a strong emotional investment in fictions to a degree that most of us would be embarrassed to admit to. But, hey, you’re human… and I encourage you to cling to a belief of yours that is more reliable than most: there are people in the media who seek to influence this election through subterfuge.

You’ve got to forge ahead past that flushed feeling of shame and find your anger, because the individual who invented this lie should be called to account, and that won’t happen if the people who published it think their audience won’t care or notice.

The Christian Times needs to take immediate and firm action by retracting this story (i.e. by admitting the fault and publicising this admission as widely as they did the original article) and suspending all parties involved until a full and proper investigation is held, with a full report published. Further, Donald Trump and his campaign team should respond by recognising and denouncing this attempt to influence voters with a lie (not least because they have called upon others to do the same) and suspending all relations with the Christian Times until the matter is resolved.

If you ask for anything less, you are willing to accept lies from one side and not the other, and it is time to admit that to yourself.

If you get anything less, you should have serious doubts about the integrity of both the Christian Times and/or Donald Trump, and I genuinely trust that this is something you will recognise and respond to with healthy scepticism.

(PRO TIP: Watch out for claims/implications that this whole thing was an innocent mistake and/or somehow the work of Clinton campaigners trying to make Trump look bad.)

My closing statement is another quote from a book that’s popular among Christians. If you are a true believer, I wish you well and ask you to ponder on it:

“Beware of false prophets, who come to you in sheep’s clothing but inwardly are ravenous wolves.” – Matthew 7:15

A gentlemanly tip of the hat to original spotter Michael Ward, who first brought the badly-photoshopped Christian Times image to my attention.

UPDATE – I have attempted to contact the Christian Times for comment, but there is no obvious email address that I can find. I did, however, discover some added detail as part of that search. The author of this article (published under ‘admin1’) is John Chefetz, ‘owner and founder of Christian Times Newspaper’.

UPDATE – As noted in the comments, the website calling itself ‘Christian Times’ is not associated with the Christian Times Newspaper, neither is it associated with the Christian Media Corporation Company. The bio details I quote above (and other text on their website, and the domain of the site itself: christiantimesnewspaper.com) may give a false impression about this, so I have taken pains to avoid/remove any mention of the word ‘newspaper’ adjacent to the name ‘Christian Times’ in my article, but also wish to add this statement for clarity in light of what the quoted bio claims and what the associated domain name implies.

MAJOR UPDATE (13 October) – I was in touch with the owner and admin of this site about the above story (not an easy thing to do, as the site carries no contact information). They claimed to be on an overseas trip and pledged to follow the matter up with staff as soon as they got back to their hotel room.

Then, instead of issuing any correction or retraction, they simply removed some text for a few days, and then, later, the entire page. They then uploaded an entirely different story that also used evidently fabricated evidence to support a further allegation of election fraud, this time taking BBC footage of election fraud in Russia and pretending it was a discovery of election fraud in the US. The relevant video ‘evidence’ has even been clipped to remove an obvious Russian flag in the foreground!

This comment under one of the copies of this video on YouTube tells you everything you need to know about the state of mind of many people who are taken in by these audacious lies and clumsy forgeries. Being told outright that the claim is false – even by people in authority – does not faze them at all.

It is often hard to determine intent in cases such as this, but here it could not be more obvious. The following is a series of screen captures of christiantimesnewspaper.com (no connection to the actual Christian Times Newspaper) ranging from February 2016 to October 2016. Note how the site has gradually shed any mention of satire over time in order to present itself as a credible news site as the election approaches. Despite claiming that they make it ‘abundantly aware’ (sic) that the site contains fiction, this has always been presented as fine print, even when the site carried such text, and it clearly stopped doing that a long time ago. In fact, the current version of this fine print promises “accurate news and information”.

Further, it should be immediately apparent to anyone who shows the slightest bit of interest in inbound links to the relevant site/articles that the allegations made about election fraud are being widely accepted/presented as both genuine and credible by some very emotional people who are by now utterly convinced that any defeat of Trump in November will be the result of election fraud. This is the kind of thing that not only undermines democracy, but can and often does lead to violence.

Here I will highlight the rather hopeful arse-covering statement in the aforementioned fine print stating that the site author “does not take responsibility for any of our readers’ actions that may result from reading our stories”.

Also, every page at the so-called ‘Christian Times’ loads the following pop-up declaring a previous fraud to be a certainty (“We already know that Hillary stole the primary. We can’t let her steal the presidency.”), and inviting unwitting readers to be alerted to further ‘evidence’ of alleged election fraud. 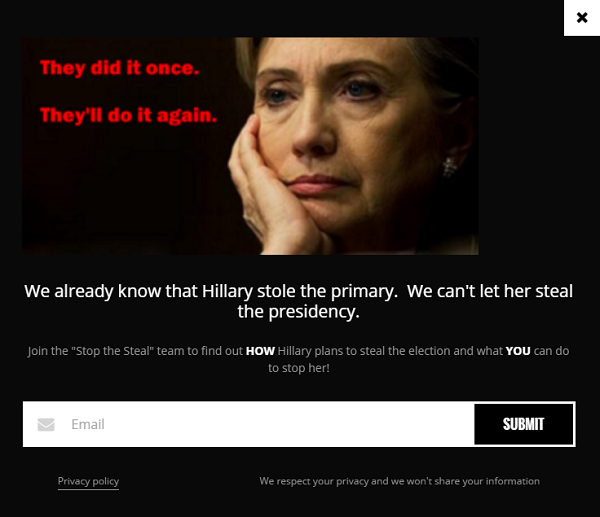 The owner states their name as ‘John Chevetz’ on the site but in private emails they give their name as ‘Jay Chafetz’. Either one name is an alias, or they both are, but the author has clearly been publishing their stories and the entire site under an alias (PRO TIP: this is not the same as using a ‘pen name’).

Finally, while the site owner (‘John’ or ‘Jay’ or whatever) refuses to give any details about a physical address for their so-called news organisation, there are forensic indications that ‘John’/’Jay’ is based in Delaware… even when he claims to be busy overseas.

Ah, the grandiose lies of habitual liars; how I have missed them*.

(*I wish to make it ‘abundantly aware’ that this sentence may contain sarcasm.)

UPDATE (18 Jan 2017) – Headline changed to include the name of the shameless liar behind this and other fake news stories: Cameron Harris

MAJOR UPDATE (19 Jan 2017) – I have written a new article that covers a few items that Cameron Harris would rather you didn’t know about: Cam Harris, the Fake News king of Maryland

Tim is the sole author of Bloggerheads.
View all posts by Tim Ireland →
This entry was posted in Donald Trump. Bookmark the permalink.