This entry was posted on
Thursday, January 19th, 2017 at
10:25 am and is filed
under Donald Trump, Uncategorized.

If you’ve ever watched Ferris Bueller’s Day Off, you may have wondered how Ferris financed his adventure (including fuel, tips, tickets to the baseball game and a very expensive lunch at a posh restaurant). Well, the original script and cut of the movie included scenes of Ferris searching the couch for change and stealing money from his sister’s room, before calling his father and conning him into revealing the location of saving bonds… that he then takes without permission and converts to cash at a local bank.

(Search for ‘bond’ on this page and you’ll see what I mean; Ferris even brags to camera about how easy it was to fool his father by saying: “the guy gave it up faster than a drunk Catholic girl”!)

All of this was cut out of the movie because it made Ferris much less likeable. Similarly, a certain Mr Harris has chosen to omit and even erase a few juicy details from his own adventure, and I am here today to share those details with you.

There’s been a lot of misuse of the term ‘fake news’ of late, but it is utterly clear that Cameron Harris has been caught bang to rights producing entirely false and inflammatory stories (see earlier on Bloggerheads) that he specifically invented to appeal to a target audience in pursuit of profit and the advancement of a political agenda. You are encouraged to read the interview with Cameron Harris by Scott Shane of the New York Times, but for the purposes of this article, you really only need to see this later tweet by that same journalist:

My impression after 3 interviews with Harris: He doesn't fully grasp how pernicious it is to democracy and public discourse to make stuff up https://t.co/YTEC9QDJHx

Cameron Harris has since published the following statement on Twitter:

While the initial motivation behind launching a fake news site was financially-based, the lesson I learned from the experience is far more important — and it’s one that can’t be covered in a tweet or even a NYT article.
–
There are large-scale changes occurring in America, from where we live and where we work to the people with whom we interact and the lens through which we see the world. America has responded to these changes poorly. Instead of engaging one another we have withdrawn into the ideological and cultural circles that support the belief systems to which we subscribe.
–
Fake news flourished in this election cycle because it served the purpose of reinforcing these biases, and it occurred on both sides. It catered to predispositions that Americans already held, and while fake news has been widely discussed, the dynamics behind it have been largely ignored. Whether fake news remains prevalent or not (and I hope that it doesn’t), our nation cannot move forward from such a divisive election cycle if we continue to seek comfort in our own beliefs and refuse to challenge our personal world views.
–
I apologize to those I disappointed by my actions, and my wish is that I will be allowed to contribute my informed experience to a larger dialogue about how Americans approach the media, tough issues, and the manner in which we, collectively, will inform our decisions going forward.
–
Cameron Harris

In short: it’s all your fault, America, and you need to take a long, hard look at yourselves.

The psychological projection may seem mind-boggling to you, but it’s to be expected from Mr Harris, who repeatedly and falsely accused others of producing fake news before, during and after the election, knowing that he was a producer of genuinely fake news. Further, the assertion that it happened on both sides is as misleading as it is self-serving: there may have been inaccuracies on both sides, distortions on both sides, and even a few latecomers trying to fight fire with fire, but the fake news phenomenon was closely tied to the Trump campaign and Trump’s own loose relationship with the truth, and every reasonable and informed person acknowledges that.

As for unhealthy divisions and what dialogue may lead to positive change, I would dare to suggest that some actual regret on Mr Harris’ part will go some way to taking us forward.

This Twitter exchange between myself and Cameron Harris includes an example of his inventing people who don’t exist and writing dialogue on their behalf. This particular example includes his pretending to be a Black Panther intending to target “white women” on polling day:

@camharris_us @nytimes How does pretending to be a Black Panther fit into all of this? What kind of dialogue does that start, do you think? pic.twitter.com/c2Cq6aESnO

Mr Harris also actively contributed to false allegations of child rape (which regular readers will know is one of my least favourite things): 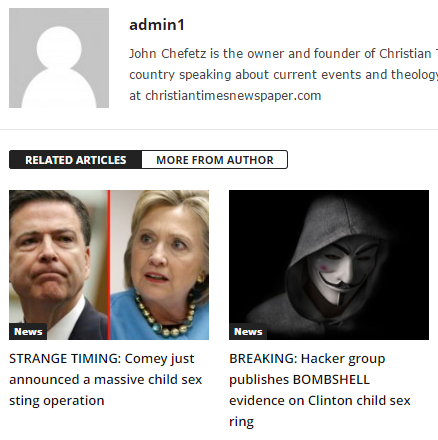 Cam Harris has since been fired from his job working for Republican politician David E. Vogt III, but despite some clumsy attempts to cover his tracks, it can be demonstrated that Mr Harris listed Mr Vogt not as an employer but a client on a website touting professional campaign services under the name ‘Chesapeake Strategy Partners’ (chesapeakestrategy.com): 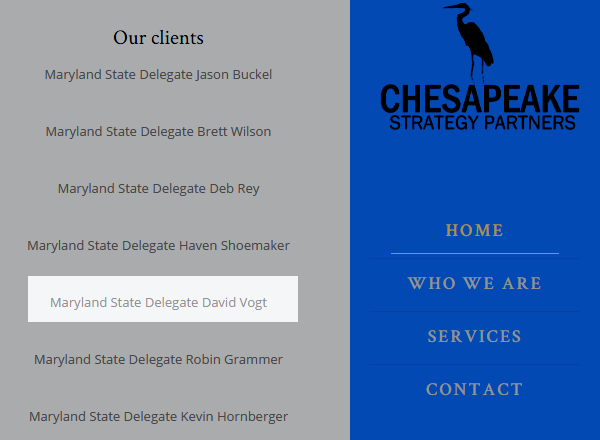 Mr Harris also listed many other people/organisations as present and previous clients, and I am right now in the process of determining the truth of his assertions in this respect. As regulars will know, I often put trackers on my outgoing emails when I suspect I am about to be lied to or stonewalled, and I can tell you for a fact that there are many Republicans in Maryland who are fully aware of Cameron Harris, his admission of making fake news for profit, and his claim that they are clients of his organisation ‘Chesapeake Strategy Partners’… but they are very busy hiding under their beds at the moment.

At the time of writing, only Mr Vogt has taken any action and/or issued any statement. So when you read the following list, do so knowing that near to everybody* on the ‘current’ set of alleged clients (other than Mr Vogt) has been asked about this and decided to keep their mouths shut for now. I can say with certainty that these people/organisations and/or associated staff have received and read questions about their alleged involvement with Mr Harris, and even engaged in internal conversations about it… but so far, no-one is talking.

You should expect more from your representatives and/or those who campaign on their behalf, which is why I have added hyperlinks to every name to include contact details for every individual/organisation on the ‘current’ list where I can demonstrate that they have been informed of claims by Mr Harris that they are a client of his, but decided not to respond. If you live in Maryland, or even the good ol’ US of A generally, you might want to have a word with some or all of these people about their alleged involvement with Mr Harris and their silence to date.

(*If anything changes, this article will be updated to reflect any belated cooperation/transparency. If there is a hyperlink on their name… they still have questions to answer, and you’re invited to ask them yourself. If the link has been removed, as it has been for Mr Vogt, then they have issued a statement. There is at present one exception, a Haven Shoemaker who has not yet received the relevant email as far as I know.)

To close, mainly to avoid anyone rushing to assumptions, I will add that I have asked Mr Harris directly if Katherine Harris is a relation, and I am awaiting a reply.

UPDATE (23 Jan) – So far, there’s a lot of internal chatter in Republican circles over Maryland way, but almost no-one’s talking. Still, the Chairman of Change Annapolis has today issued a statement, and that’s a start. The list has been updated accordingly, but there’s still a lot of names to go, and Harris himself refuses to answer any questions about the accuracy of the list of clients he published. Instead, he’s busying himself on Twitter making snarky comments on the media and critics of Trump and why no-one trusts them anymore. (makes face)

UPDATE (15 Feb) – Deb Rey declined to answer multiple emails about this matter, but finally answered the key question about Cameron Harris on Twitter (almost a month after publication of this article), saying: “I was never a client of his.”

Tim is the sole author of Bloggerheads.
View all posts by Tim Ireland →
This entry was posted in Donald Trump, Uncategorized. Bookmark the permalink.

2 Responses to "Cam Harris, the Fake News king of Maryland"