You may recall David Davies being in the news a few weeks back. Then again, you may not, and given the reason why he was in the news at the time, he’d probably prefer it that way:

I know that someone didn’t like this highlighted text being in his Wikipedia profile. It was removed on 21 October.

This highlighted text was also removed at the same time, by the same editor.

The person who made these edits made them anoymously, and offered no reason/justification for the removal of the highlighted text; presumably, they just didn’t like what they were reading in Wikipedia, so they removed it.

The only clue left behind by the anonymous editor was an IP address, which doesn’t always reveal much on its own… but by sheer chance I had emailed David Davies at around this same time, and the exact same IP address turned up among the recipients.

So I emailed David Davies about this edit, and made it very clear that it could be demonstrated that either he or a member of his staff had edited Wikipedia anonymously in his favour.

David Davies’ response? Well, he didn’t have one.

I made it very clear that if he had no knowledge of the edit and/or wanted to investigate the matter, then he should have the opportunity to look into it and any subsequent article should reflect that.

Instead, David Davies chose to say/do nothing and just wait for it all to blow over for reasons we can only guess at.

I leave you with that mystery and the questions that David Davies chose not to answer:

How often do you and your staff edit Wikipedia anonymously?
:
How often have you personally edited this page anonymously?
https://en.wikipedia.org/wiki/David_Davies_(Welsh_politician)
:
How often do you personally edit other pages anonymously?
:
Assuming you are willing to admit to anonymous edits, how do you defend this action, given that (a) Wikipedia is meant to be a neutral reference site, not a PR site containing only things that you approve of, and (b) MPs are meant to hold to high standards of transparency and accountability?

Of course, I will be sure to update this article if David Davies suddenly thinks of a response to all of this six weeks after the event, but personally I don’t expect much from anonymous cowards and/or MPs who use them to protect their reputations, and neither should you.

[NOTE – I emailed David Davies about the issue of party-political bullying. He declined to comment very clearly on the grounds that it was not a constituency issue.]

UPDATE (24 April 2017) – Since I wrote this article, there have been further multiple anonymous attempts to remove all mention of controversy from the Wikipedia profile of David Davies (link). 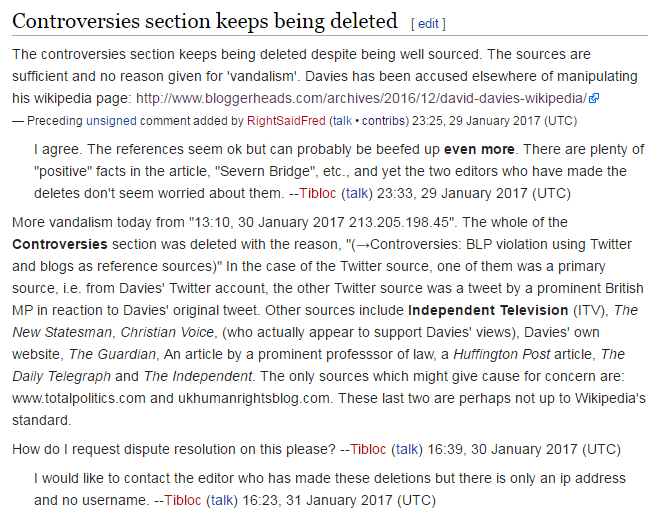 You can read what Wikipedia editors wrote about their concerns (and how that conversation develops) here, but to be clear on this point for any new readers:

I do not edit Wikipedia under any name, and I do not advise that you go rushing in there in response to any of this, either. It is far preferable that an experienced editor with no dog in the race handle the problem.

That said, you may want to look at the ‘Talk’ and ‘View History’ links on the profile page of your local MP/candidate today and see if this snap election hasn’t prompted a few nervous edits. There are many MPs who struggle to understand the difference between an election pamphlet and something that is supposed to be reference material, and any MP who conspires to secretly censor their own Wikipedia entry clearly struggles with wider issues such as honesty, integrity, accountability, and democracy.

By now it can be demonstrated that David Davies is one such MP: even if he avoided making the edits himself, he was advised of anonymous edits in his favour involving an IP address used by his office/staff months ago, and chose to ignore the issue.

Tim is the sole author of Bloggerheads.
View all posts by Tim Ireland →
This entry was posted in Teh Interwebs, Tories! Tories! Tories!. Bookmark the permalink.