I thought it would be interesting to have a summary of what the major parties are saying on Twitter during #GE2017, so here’s what I did:

For both @Conservatives and @UKLabour, I took all tweets & replies from every day for the entire month of May 2017, and pasted them into a spreadsheet. I then removed all of the Twitter fittings & furniture and usernames and what have you, so the only words that remained were from the body of tweets.

(Obviously, words that were displayed in image or video files were not detected or counted.)

I then entered each set of words into a .TXT file for upload to wordclouds.com, gave each resulting text cloud the same font, shape, size and pattern, and the results are what you see below: a visual summary of what each campaign has had to say so far, as expressed through Twitter. 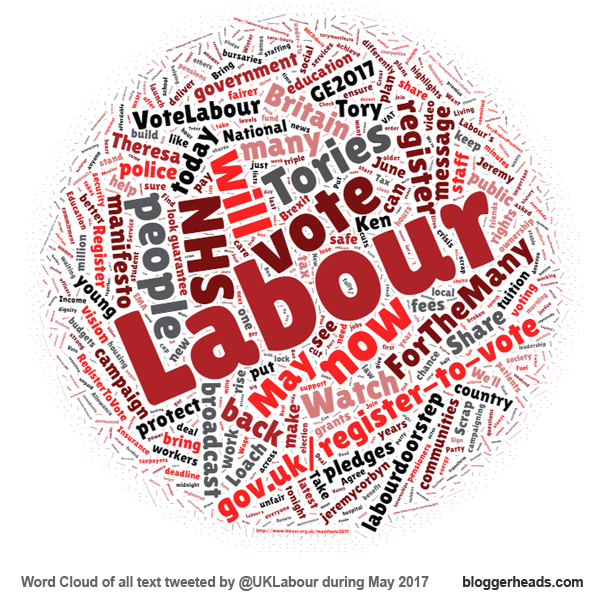 Word Cloud of tweets by @Conservatives during May 2017 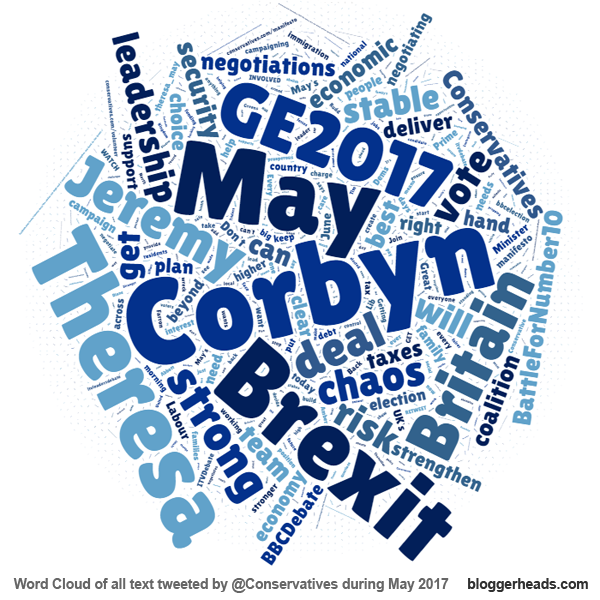 Word Cloud of tweets by @Conservatives during May 2017

I’ll leave any analysis to others. Personally, I think the data speaks for itself.

Do feel free to use these images to make your point out there, just be sure to link back to the little black duck who did all of the hard work.

Psst! Look for me in Replies to the @Conservatives, and check out the tag #TheyLie on Twitter, especially if you’re a fan of kicking ass and chewing bubblegum.

(MINI-UPDATE – I should be clear that I gave each set the same instructions. While both data sets are trying to form a circle, one data set clearly looks more organic than the other, and that’s because that data set has more variety in the text.)

Tim is the sole author of Bloggerheads.
View all posts by Tim Ireland →
This entry was posted in Inneresting, Tories! Tories! Tories!, UK General Election 2017. Bookmark the permalink.