This entry was posted on
Thursday, March 15th, 2018 at
7:01 am and is filed
under Search Engine Optimisation, Teh Interwebs.

I’m blogging about SEO for the first time in a long time, and yes, seeing as you ask, I do happen to be wearing my old arse-kicking boots today, thank you for noticing.

There were so many screen captures involved in this article that I had no choice but to run it as a video, available below. A full transcript of the audio follows, but you’ll want to watch the video for the full experience. Any follow-ups or updates will be posted here.

TRANSCRIPT
–
SEO stands for ‘Search Engine Optimisation’ which is all about the appearance of relevance in search engines. ‘White Hat’ SEO deals with actual relevance, ‘Black Hat’ SEO focuses mainly on appearances, and by that I mean faking relevance.
–
And when I say ‘BAD SEO’, I mean not only is this example ‘Black Hat’ SEO, but it has also been done very, very badly.
–
We’re about to take a close look at the Gasway site, but please keep in mind that while they are likely to have gone into this venture with open eyes, the actual development work you will see is that of an agency called ‘eSalesHub’, and we’ll get to them soon enough.
–
But first, the site where I first found out all of this because eSalesHub were so unbelievably lazy about their cheating methods that they also exposed clients and partners to a pronounced risk of discovery.
–
Gasway are a plumbed heating installation, service and repair company who have a single office based in Norwich. Understandably, they would like to be relevant for queries related to boiler replacement not only in Norwich, but in other towns nearby.

It’s a common problem and I’ve advised on it many times. There are many ways of approaching the issue of making a local presence apparent, but I can guarantee you that this is the wrong way:
–
On their site, Gasway appear to indicate a physical address in nearby Cambridge, with some guy called Oliver in charge. Ditto Peterborough. But there’s no Gasway office or outlet or depot or anything in either location, and the Peterborough location is a residential address.
–
Gasway also appear to have a phantom office or location or outlet or whatever in Fakenham with an ‘Andrew’ in charge. Fakenham is a real place, but there’s no Gasway office there. There’s also an ‘Andrew’ in charge of local Gasway outlets that do not exist in 25 other locations.
–
All of these locations, by the way, carry the indication of a five-star review for Gasway on TrustPilot, yet when you check with the TrustPilot site, gasway.co.uk lies unclaimed with only four reviews, all of which are single-star. A neat trick.
–
Back to these localised gateway pages, starting with Norwich where Gasway DO have an office, here’s a ‘Mrs Jenny Edwards’ with a gushing testimonial and Gasway telling us how their local status means they treat customers like family. One of their own.
–
60 miles away, and here’s the same Jenny Edwards claiming to be a Legal Secretary based in Cambridge, where Gasway are based (apparently) and therefore treat local customers like family. One of their own.
–
And here’s the same Jenny Edwards claiming to be a Legal Secretary based in Peterborough, a further 40 miles away from Cambridge, where Gasway are based (apparently) and therefore treat local customers like family. One of their own.
–
And so on and so forth again and again and again; town after town, village after village across the Gasway site.
–
If you are thinking that it would be difficult for one woman to live or work in all of those locations, you would be right, and it is especially hard for this woman to give a credible testimonial for a gas boiler installation or repair anywhere in the UK, because she’s an American named Jessica Fertitta, who died in fire 7 years ago.
–
I mentioned laziness being a further issue here beyond the dishonesty, and this is but one example: a quick Reverse Image Search betrays appearances of this same picture on the websites of Go Restore & Repair as an Accountant, on Go Plumber as a ‘Stay at Home Mum from Hull’ and on Go Carpet Cleaner as a police officer from Kent.
–
And she’s some poor woman who died tragically young in a fire. Now Jessica Fertitta’s face is currency in an unseemly scheme to fake popular support for local business outlets that don’t even exist. This is both unpleasant, and far too reminiscent of what is going wrong with politics these days.
–
Looking at the eSalesHub website, we see a lot of talk about their focus on local search, where they explain how they ‘sell on’ leads from a series of self-made ‘Go’-branded sites, and how they ‘solve the local search problem’ for clients like ‘Mr Electric’ using their “patent-pending local search technology”.
–
A quick visit to the Mr Electric site shows exactly the same thing going on as at the Gasway site, and ooh look, here’s that same photo of Jessica Fertitta, this time as a ‘Michelle Lewis’ describing an event including great service and a free product from Mr Electric that almost definitely happened for realsies. Believe me.
–
This is bad SEO in that it is dishonest, but it is also so poorly executed as to be laughable. You shouldn’t do this, or anything like it, and you should show someone the door the moment they suggest this or anything like it as a viable option.
–
If you want to succeed in search engines in the long term you need to radiate relevance from the inside of your organisation out, not have it attached to your website after the fact, and certainly not as a full-blown facade to the extent that your first contact with customers is an outright lie at the expense of genuine local businesses in their community.
–
eSalesHub were invited to comment on the matter of phantom premises and bogus testimonials and the legitimacy of ‘chasing leads’ this way at the expense of genuine local businesses. I didn’t hear back from them, so here we are looking at the material they published and seeing what you think about it all.
–
Me, I think every marketing relationship begins with an act of trust, and you betray that at your peril.
–
Thanks for watching. Please subscribe and all that.
–
If you feel bad about what happened to Jessica Fertitta, there’s an endowment fund in her name at the University of Texas, and you can donate by visiting this URL [http://endowments.giving.utexas.edu/page/fertitta-jessica-exc-fnd-stud-advoc-civ/5996/], or the bitly link which will take you to the same location: [bit.ly/fertitta]
–
Cheers all.
–
ENDS 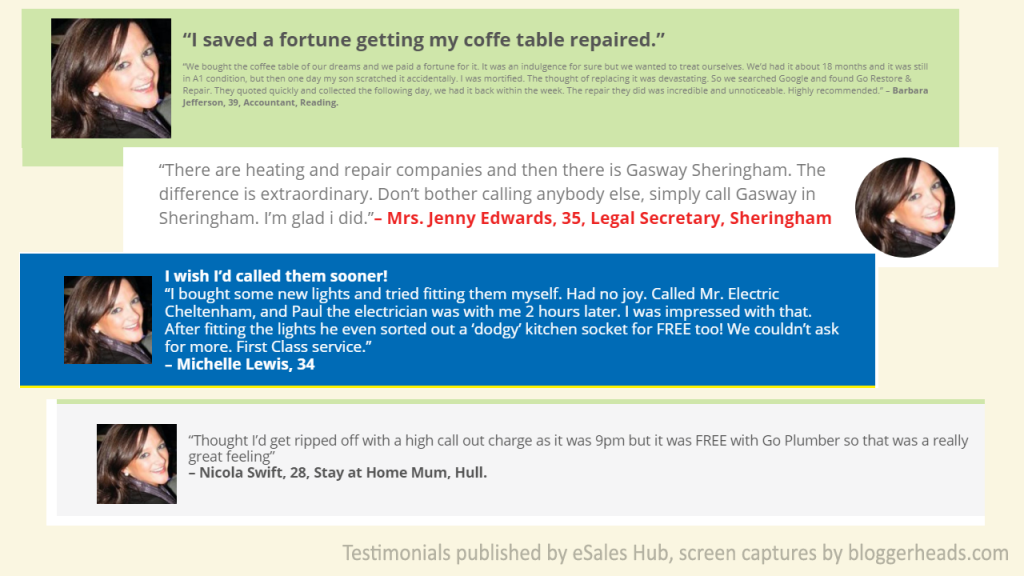 15 March – Rolling updates in this twitter thread this morning. A summary so far: eSalesHub have not replied to my email, but have chosen to block me on Twitter. Jessica Fertitta’s image is still being used without permission on the Gasway site, but eSalesHub have been very busy removing ALL testimonial photos from the servers of the Mr Electric and ‘Go’ sites. Not the testimonials, you understand… just the photos that demonstrate that the testimonials are likely faked.

@bloggerheads 1/2 | We at Mr. Electric UK are highly concerned by the questions your recent video raises. We can confirm the utilisation of eSales Hub for limited web services and we chose to start this relationship due to the assurance their Google Partner accreditation gave us.

@bloggerheads 2/2 | We have started a complete investigation and assessment of our partnership, if you have any information you believe may be helpful to us in the course of this investigation please email: UK.Comms@dwyergroup.com – Josh

17 March – The original thread is still going, and this latest update is worth embedding:

Though the 'phantom map presence' issue remains unresolved, it IS the weekend and I am happy to report that developers behind the Gasway site have very recently chosen to remove the photos of Jessica Fertitta AND the associated testimonials.

Tim is the sole author of Bloggerheads.
View all posts by Tim Ireland →
This entry was posted in Search Engine Optimisation, Teh Interwebs. Bookmark the permalink.