Jonathan Lord and the Conservatives’ Code of Conduct 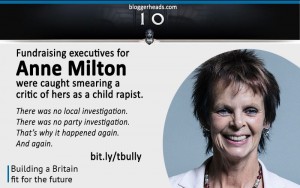 In 2006/7, when managing campaigns for Anne Milton and the Tories in Guildford, Jonathan Lord was made aware of two of his own candidates (Mike Chambers and Dennis Paul) involving themselves in false allegations of paedophilia and child rape against another candidate (more/latest).

This was a crime under the Representation of the People Act, as Lord would have known at the time, being a campaign manager. The event also involved a series of hate crimes to do with homophobia and several offences under the Communications Act, but for now let’s focus on the evident crime demonstrably committed by two Tory candidates: knowingly making a false allegation against another candidate, in this instance in the form of digitally shared false allegations of paedophilia and child rape.

Jonathan Lord did not report this crime to police, and he did not suspend his candidates prior to any party investigation, because there was no party investigation. Years later, Lord explained to me very clearly (‘off the record’) that he chose this path because a campaign was in progress, and he did not want to “give succour to (his) opponents” or critics like myself who he accused of ‘twisting’ “other little things.”

Earlier, Lord had claimed that he could not process my emailed complaint unless I wrote him a letter and gave him my home address. I was worried that this sensitive data would be misused or leaked, especially after someone from an earlier Milton campaign came knocking on one poor bloke’s door uninvited after that person had the temerity to mock her in the letters page of the local newspaper. My email complaint was valid in any case (as were those of others who also used email to complain and inform about Something Happening on the Internets), but he persisted with this excuse that ‘no-one submitted a complaint in writing’ for years.

Later, my home address was discovered and leaked by one of the local Conservative fundraising executives (who sought to manipulate a third party into publishing it alongside the false allegation that *I* was a child rapist), so I feel my concerns about data misuse from this quarter were extremely well-placed, and I make no apologies for wanting to protect my privacy then or now, especially given how some of Mr Lord’s party political associates continue to behave today.

The latest position of the Conservative Party on this matter is that I should report my concerns to police, which I take to be an extremely disingenuous position, not least because:

(b) the statute of limitations is a thing, as they damn well know

(d) Worse, Jonathan Lord failed to report crimes committed by his candidates when he became aware of them; he didn’t even suspend them as candidates or look into the matter himself.

(e) All of this sets the formal Tory position (for any matter prior to any Code of Conduct) as: ‘anything short of a prosecutable criminal offence is/was none of our business’

But that’s how the party deal with the issue.

Lord is now the MP for Woking, and his constituency office like to avoid any discussion of the issue on the basis that it all happened before he became their MP, so therefore is none of their concern. His Parliamentary office in turn refuses to answer any question not issued by a constituent, but last week, while everybody was dancing and diving about trying to give their man plausibly deniability, something wonderful happened… a minor kerfuffle ensued over the possibility that someone might have said ‘no comment’ instead of keeping their mouth shut, and in the panic, Jonathan Lord was openly CCed on his personal address.

– I would respectfully request that in future Mr Lord conduct his business using his official Parliamentary address, as it would not do to have him dodge his responsibilities under data protection/access and freedom of information laws.

– Mr Lord can no longer deny having seen the following questions, and by now it can be demonstrated that he chooses to avoid them rather than answer them.

Here are the questions that Jonathan Lord the Conservative MP for Woking refuses to answer.

1.
In your role as campaign leader, you must have known that both Dennis Paul and Mike Chambers violated the law, even if they spoke the truth when they denied authorship of the relevant anonymous website. Why did you not report this to police yourself?
:
2.
Are you aware of any Code of Conduct for the Conservative Party and any/all of its members that pre-dates the ‘voluntary’ code introduced in 2014? If so, please provide copies for the years covering our dispute.
:
3.
Kindly cite the Tory party policy that existed at the time that required me to disclose my home address to you via a letter before you would process my complaint.
:
4.
Do you have any personal regrets about the way this was handled by you and how it subsequently escalated to the point where a Guildford-based fundraising executive later took it upon himself to ‘down’ me on Anne Milton’s behalf with yet another false allegation of child rape?
:
5.
Dennis Paul and Mike Chambers both denied authorship of the anonymous sites targeting me and their opposing candidate. [REDACTED] Do you as a serving MP recognise the value in determining the truth of the matter after all these years, and are you willing to cooperate?
:
6.
David Cameron’s office stated at the time that he was confident that the matter was being ‘investigated at a local level’, but I can demonstrate that it was not. If it had been investigated, both Chambers and Paul would have been suspended. Are you aware if David Cameron ever came to know that it had not been investigated at a local level, and if so, what did he have to say about that to you, the person who should have investigated it?

For the record, Jonathan Lord isn’t the only Tory having difficulty with this issue, or those questions about what Code(s) of Conduct existed for volunteers and candidates prior to now:

I have a verifiable recording of Jonathan Lord stating why he did NOT suspend two Tory candidates who engaged in false allegations of child rape against a rival candidate (a crime he failed to report to police).

Any respectable person would have been horrified by the actions of these candidates/fundraisers. I am of the view that it should have been bigger and more important than any personal difference or political dispute then, and should be now.

You may not be concerned about it or the years-long cover-up that followed… but surely you have some questions about how the Tories got by without a Code of Conduct before now, and what formal party-wide policy (if any) applied to past complaints. I’ve raised it with dozens of Conservative MPs, and none of them have any answers to this simple question:

Also, are you aware of any Code of Conduct for Conservative Party & any/all of its members that predates the voluntary code introduced in 2014? If so, when/where might we, the unwashed public & victims of abuse, see versions of these previous Codes?

Asking for a thing. Cheers. pic.twitter.com/6UCbidH1KQ

What is the current Code of Conduct worth if it is laid on a foundation of lies? How can MPs like Jonathan Lord credibly claim to stand by it in principle when they demonstrably do not stand by its principles?

Tim is the sole author of Bloggerheads.
View all posts by Tim Ireland →
This entry was posted in Anne Milton, Tories! Tories! Tories!. Bookmark the permalink.