Justin has featured the trailer for Oliver Stone’s biopic, and over at Pickled Politics, noises are being made about the fine choice of soundtrack…

… but me, I’m reminded of this for some strange reason:

Posted in George W. Bush | Comments Off on W

John Cleese on the parrot-like skills of Sarah Palin

Paul ‘Fangio’ Staines emerged from the weekend with booze on his breath and egg on his face after posting a poor item in poor taste, deleting it, and then compounding the error by defending himself anonymously. When commenting under his main ‘Guido Fawkes’ ID (i.e. when not pretending to be somebody else speaking for him), Paul also promised that the item would return “later as a longer piece”. (more)

Shortly after this, Staines published a post that appeared to suggest that an embarrassed government had ‘disappeared’ the information in question and cast it into the memory hole. Because they’re fascists that can’t be trusted, obviously.

But Paul Staines can be trusted. Because when he found out that he got his wires crossed somewhere, he… erm… ‘disappeared’ the information and cast it into the memory hole.

Perhaps we can look forward to its return… “later as a longer piece”.

3. Still, some good came of it all. I was so inspired by the ‘list of quotes’ technique used by their mysterious comment contributor that I decided to have a got at it myself this lunchtime with the help of a selective search in Google.

I recently blogged about Staines’ use of the word ‘chinky’, and a defence put forward by a semi-anonymous comment contributor here made it necessary, believe it or not, to point out that Staines also happily published the word ‘chink’. And not for the first time.

Here, for the doubters, is proof that the man is perfectly happy with the use of this word on his website as an ethnic slur; a list of uses of the word ‘chink’ under comments that Staines has allowed on his site this year…

Tuesday, March 25, 2008: “some visiting gang of ancient, chink communist fellow torturers…”, “anti-Chink protest…” and “So I was allowed a visa to visit places that the smell of deadly pollution alone would make you want to throw-up your breakfast. Problem is some of the poor Chinks are so desperately poor, you worry they might eat it. NO JOKE.”

Wednesday, March 28, 2007: “If your [sic] thinking of battling the establishment media take heed of that Sun Tzu guy. The Chink who wrote ‘The Art of War’.”

Monday, April 7, 2008: “Chink thugs”, “Chink Clink”, “We should thank the Chinks for helping us out with our problem…” and “…Rudd was effectively telling the Chinks to fuck right off.”

Saturday, April 12, 2008: “…the sight of the prime minister of the United Kingdom kow-towing to chink thugs in his own Downing Street frontyard…”

Thursday, June 19, 2008: “Just look at Jock Newsnight interviews, any responsible, sensible job is done by an English person, a Pole, or a Chink. Jock is like the native Fijian. Idle whining bastard, anyone can do the work as long as its not him, good for fuck all. Just like you. Jock, England’s burden.”

(Psst! Do keep in mind as you read all of this that it is very easy to lose control of a mob once you get one started.)

I have no doubt that Paul can somehow find a way to spin any or all this to his advantage; he excels at this craft that he claims to despise.

Posted in The Political Weblog Movement | Comments Off on Paul Staines: victim of the demon drink deletes two links but leaves the ‘chinks’

McCain and Palin lose control of the mob

Guardian – Desperate McCain gives beat to the dark heart of conservatism: It built up over the course of the week, as supporters at the rallies of John McCain and Sarah Palin started randomly screaming “terrorist!” and “off with his head!” and “treason!” and even “kill him!” at the mention of Barack Obama’s name…

AP – Angry anti-Obama taunts grip McCain, Palin events: Some of the anger is getting raw at Republican rallies and John McCain is mostly letting it flare… When a visibly angry McCain supporter in Waukesha, Wis., on Thursday told the candidate “I’m really mad” because of “socialists taking over the country,” McCain stoked the sentiment.

And then suddenly – in a manner that surprised at least one person – inflaming hatred led to a mob as dangerous and as unpredictable as fire:

CBS News – McCain Booed For Telling Audience To Be Respectful of Obama: In stark contrast to his last town hall meeting yesterday, John McCain dramatically toned down his attacks on Barack Obama, even after many in the audience were asking him to go on the offensive. McCain was even booed when he told the audience to be respectful and that “you don’t have to be scared” of Obama

The most unsettling aspect of this is that it wasn’t just online activists and mainstream media that prompted the gentle tap on the brakes that was so poorly received in Minnesota, but the intervention of the secret service!

That’s a campaign out of control, right there; I don’t care which side you’re on.

(Erm… unless you’re so far to the right that you think that the reporting of these comments to the secret service is part of a conspiracy involving the Democrats, the media and “…the liberal elite (who) want you to believe this race is over,” in which case you may as well stay right where you are. In your box.)

OK, so now I think would be a good time for Sarah Palin to ignore any wishy-washy objections from McCain or his people, and start sending ‘the right signals’ to the End Timers in her electoral base.

Just so we can get *them* revved up and feeling so downright biblical that little things like the law no longer seem to matter.

After all, what harm could it do? 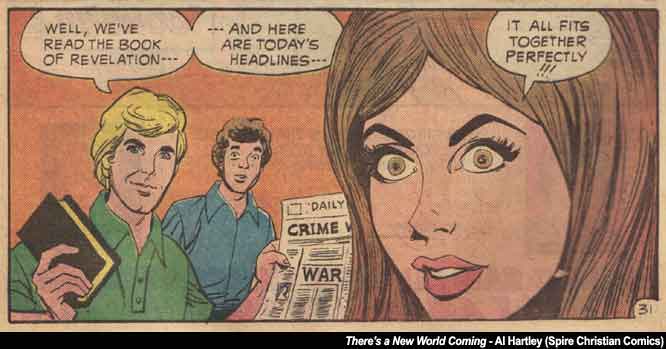 Infiltration was relatively straightforward, and there’s no need to burden you with details.

Upstairs and down; every speck of spare wall space is a noticeboard in the Student Union Common Room / Bar at the School of Oriental and African Studies (SOAS), but I tried not to overdo it; that would make other people wishing to use some of this space unhappy.

I’m using Flickr for the first time in a long time, and you can see the SOAS photos starting here. 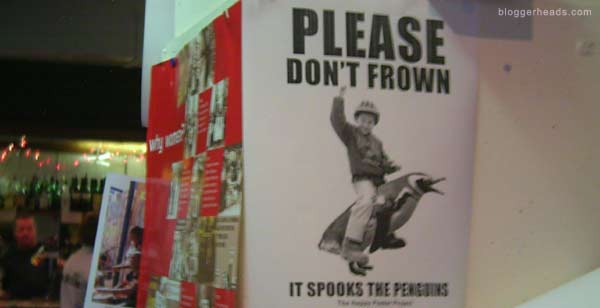 Next: Posters in the workplace, I guess. I already have one picture on file. Would you care to add one? Put a poster up at work and send it in!

There’s no coming back from this.

42 days has been chucked out by the Lords for being, in the words of Baroness Mallalieu; “dangerous, wrong and completely and wholly unnecessary in practice”

Brown doesn’t have the time or support required to push back, so it’s over.

There may still be an entertaining hissy-fit from Rebekah Wade and she may even drag the Page 3 girl into it.

UPDATE – BBC – Ministers drop 42-day detention: Home Secretary Jacqui Smith has said that plans to extend terror detention to 42 days will be dropped from the Counter-Terrorism Bill. It follows a heavy defeat for the government in the House of Lords, which threw out the plan by 309 votes to 118. Ms Smith said instead the measure would be in a separate piece of legislation to be brought to Parliament if needed.

Yahoo in ‘made you look’ headline shocker

I’m sure this got a few right-wing bloggers excited before they read the fine print. Not that any of them are desperate for an excuse to drink on a Monday afternoon or anything…

Paul Staines is not a lacist

Since an encounter with the BNP at the start of his political career was rediscovered, Paul ‘Guido Fawkes’ Staines has gone to great (and yet disappointing) lengths to assure us that he is not a racist.

Those of us who originally wrote about Staines’ 1986 adventure a couple of years back didn’t regard this to be the central issue at the time, but Staines did. He is, after all, the type of person who will take any scrap of evidence and misrepresent its significance without hesitation… so hopefully you can see how his name being connected to the BNP would make him hypersensitive to the dangers of a ‘racist’ tag.

So what the hell is this about?

Oh well. At least it gives me an excuse to wheel out this excerpt from a Captain Hurricane strip that I found in the boys-annual archives last night. This, apparently, was acceptable entertainment for young boys in 1973:

(Yes, I am aware that this strip is about Japs, and not chinks, slopes or gooks. Like it makes a difference to some people.)

(Psst! A mistake like “He flamboyantly *drunk* a glass in front of the Chinese media…” is an easy one to make. If you happen to be drank at the time.)

UPDATE – The homophobia in that thread is tipping the scales a bit, too. Here’s a highlight featuring both racism and a certain assumption favoured by many homophobes:

1. Justin McKeating – Say ‘no’ to 42 days.: The House of Lords debates 42 days today and is expected to vote against it, but with the Prime Minister still insisting that he will push through the 42-day proposals, [Amnesty International] will keep on campaigning until it’s defeated once and for all.

2. AlertNet – 12 New Stomach-Turning Revelations About Sarah Palin: Palin has taken to smearing Obama. But it’s her own record that continues to yield alarming information, undermining her skills and credibility.

3. Web user makes his views known on the fine body work done by Import Image / iDesign in Walnut, CA. (Ta to Lawrence for the link.)

4. Telegraph – Alisher Usmanov to drop interest in Arsenal takeover: Arsenal shareholder Alisher Usmanov has been advised not to go ahead with a takeover of the club and is reportedly ready to sell his shares.

(Psst! We were chatting at the table the other night when Usmanov’s name came up. The youngest griglet asked who he was, and a certain 10-year-old was heard to reply; “He’s Dad’s Russian arch-nemesis.” I was impressed by the correct and necessary use of a modifier more than anything.)

5. Birmingham: It’s Not Shit – Ten things we found out at the Tory Party Conference: …it became obvious that Nadine [Dorries] didn’t really like blogging (apart from the way that it got her comments straight to the diarists of newspapers), and didn’t really do it anyway – she emails the “blogs” that are part of her “online diary” to a guy who does her website…

The Happy Poster mission to Godalming on Saturday was just as revealing/rewarding as the 2004 mission, but rather than filing a full report I am instead going to suggest that you admire this single image of a sun-dappled noticeboard, because this is what the afternoon felt like: 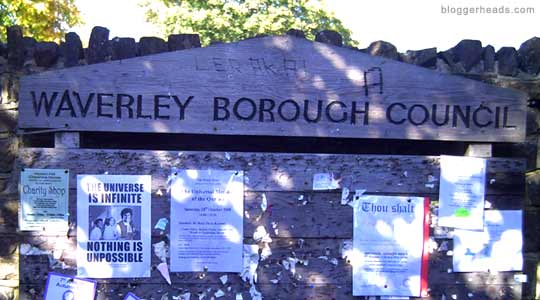 Next: Happiness comes to a London campus