Yesterday I revealed that Dominic Wightman had claimed to be acting against me on behalf of the Conservative MP, Anne Milton. Milton has been keen to avoid an admission of any relationship with Wightman by avoiding comment on the matter altogether. It is a day after she was presented with evidence that Dominic Wightman claimed to be acting on her behalf, and she has not yet deemed it necessary to contradict the man.

Another class act in the school of keeping your head down is Conservative MP Patrick Mercer; Mercer has a documented professional association with Dominic Wightman through that man’s amateur anti-terrorism initiative, VIGIL. 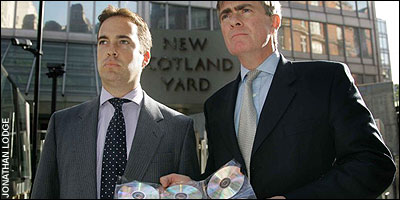 Mercer also has a long history of turning a blind eye to Dominic Wightman’s conduct, and it was after the collapse of VIGIL that Mercer learned that Wightman had claimed to be funded by none other than Lord Ashcroft, but was unable to produce any of the money he claimed he had access to and was refusing to pay someone he had recruited as an employee (Letter #1). Even if we put aside the way Wightman treated this person (who was awarded over £14,000 by an employment tribunal and never saw a penny of it) and all the other warning bells about a range of improprieties, it should have been obvious from the Ashcroft cash claim alone that Wightman was a conman, and yet Mercer turned a blind eye to this and even continued to maintain a professional relationship with Wightman because the material he provided served his personal/political agenda (Letter #2).

Even after Patrick Mercer learned how Dominic Wightman was treating other people he had lied to about VIGIL’s funding, the most the man earned was a mild rebuke, most accurately paraphrased as ‘leave me out of it’ (Letter #3).

All of this happened before I encountered Dominic Wightman, and apparently the two finally parted ways at some point, but Mercer still refuses to say when this happened and why, and he made no attempt to advise me of Wightman’s history or warn me of what he was capable of, even after I ended up getting smeared as a paedophile*.

Worse; Mercer has been relying on Wightman’s smear campaigns in order to avoid discussion of that same man. Through an informant I learned that Mercer has been responding to private questions about Wightman and the evidence I have published by claiming I am an electronic stalker* and not to be trusted… so, apparently, he won’t say a word against Wightman because he is worried about the cost to his reputation, but he’ll make serious and damaging claims about others** for the same damn selfish reasons.

Publication of these letters will have far deeper resonance for Dominic Wightman, but I’ll leave the relevant analysis of measures used by Wightman to avoid the relevant debt for a later post. For now, the priority is to (again) press Patrick Mercer to finally take a public stance against this conman.

(Regular readers will note a delicious twist to the correspondence that is, I am sure, pure coincidence; in Letter #2 Mercer has the audacity to refer a victim of Wightman’s cons back to her own MP, who just happens to be…. well, I’ll let you read the letter and work it out for yourselves.)

MINI-UPDATE – Wightman has claimed he was “working as an intelligence adviser to Mercer” at the time the above letter was written, and disputed some of its content, but the relevant page has been removed. I hope to bring you the detail in a later post to do with VIGIL finances, employment tribunals, debt and what have you.

As you can see, as late as 2008, Patrick Mercer was still playing footsies when he should have been kicking arse.

Patrick Mercer is aware that Dominic Wightman has shown a consistent pattern of deceiving people in order to convince them to do what he wants, and then attacking anyone who dares to complain through intimidation and further deceit. Currently, we are at a stage where Wightman is mostly deceiving people so they might help him to attack the people he has previously deceived (i.e. it’s collapsing in on itself like some demented form of the classic Ponzi scheme) but it would be a mistake to hope that this downward spiral will bring us to a satisfactory conclusion.

So, today, I ask Patrick Mercer (again) to stop helping Dominic Wightman in his ongoing smear campaign, and to finally take a public stand against his deceits full-stop.

Still, it should not surprise us if Patrick Mercer has forgotten to some extent that his duty is to the public, and not himself; he does, after all, appear to think that constituents are answerable to MPs (i.e. and not the other way around).

[Note – I have blurred some of the more sensitive/irrelevant details in Letter #1. The hidden information has no immediate bearing on anything asserted here, and certainly doesn’t threaten to undermine or contradict it. Sorry to bore you, but I need to leave notes like this because Wightman likes to pretend that such edits are undertaken for the purpose of deceit, when he is the only person to have published falsified correspondence in this affair. If you’re new to this issue or this type of conflict in general, this is called ‘projection’, and it is typical of Wightman.]

(*This may be more Iain Dale’s fault than Patrick Mercer’s, but I can only guess at this stage, as they are both refusing to discuss the matter; Mercer may have got the idea from Dale or someone else that I am the type of person likely to work in league with Wightman despite knowing what he is like. Or, he simply may not have cared enough to protect anyone but himself.)

(**Not just me, either: Mercer is also using a ‘trial by media’ method to repeatedly accuse his former mistress – to whom he owes money – of stalking him.)