Rather than hide this is in the closing paragraph like tabloid scum, I wish to make it clear from the outset that I have seen no evidence even hinting that Peter Ould has raped a child.

Of course, that’s not to say it didn’t happen, but it would be wrong to engage in such speculation without supporting evidence. The fact that unseen evidence might still exist somewhere is neither here nor there.

Of course, that’s not to say it would never happen in the future, but it would be wrong to engage in such speculation based on nothing.

Of course, he is an Anglican priest, but it would be wrong to judge him and all other priests on the actions of the minority of an entirely different set of (Catholic) priests.

Of course, he is a supporter of Conservatives, but it would be wrong to judge him on the basis of wild assumptions made following the actions of the minority of sexual deviants within that party.

Of course, he does have a history of homosexuality, but only homophobic morons like Paul Staines and Richard Littlejohn equate homosexuality with paedophilia.

However, if I were to operate from a position of prejudice, my view of Peter Ould’s capacity for child rape would be very different. In fact, if I were sufficiently prejudiced against priests, Conservatives, homosexuals, or this man personally, I could very easily take the position that he must be guilty of child rape, or certain to rape a child in the future.

Similarly, any photo of this man in close proximity to children would be likely to set me right off, as it would look very different to me than it would to other people who did not share my prejudice(s).

Further, I could influence how others interpreted such photos, simple by engaging in speculation likely to engage or reinforce prejudice(s) in others.

(Psst! Supporters of Nadine Dorries who have the idea in their head that I’ve stalked that MP; a significant clue is within your reach, but I urge you to feel your own way forward from this point so you may later claim to have discovered it on your own.)

And it is on that note that I reproduce the very first tweet engaging in speculation about damage to the Cenotaph during the kettling of students in Whitehall on 24 November 2010:

This was re-tweeted by 14 people, mainly far right (or ‘true blue’, if you prefer) Tory commentators and/or their followers. The idea spread though overlapping networks and, as time passed and footage of students near to the Cenotaph was shown on TV, the idea soon evolved into tweets stating as fact that the Cenotaph was vandalised and/or some of the hundreds of poppy wreaths surrounding it were thrown on a nearby fire.

First, it should be stressed that students sought and gained permission to protest, and wished to walk down this street and be on their way. But the police chose to block their way in both directions and enclose them in this area using a method known as ‘kettling’ (that they claim is designed to calm crowds… much in the same way that a kettle ‘calms’ water to boiling point).

Some people were unimpressed/outraged when students subsequently formed a crowd (!) then later set a fire near to the Cenotaph, but police set the venue for this crowd and there has so far been no evidence of students defacing this memorial or disturbing the poppies around it.

There were many camera-equipped helicopters above them (two from networks running live footage) and dozens of media cameras around them; most of the latter were drawn to the fires by the same mysterious forces that drew them to the vandalism of a police van and bus stop.

None of them recorded any damage to the Cenotaph or the poppies surrounding that memorial.

If at this point anyone wishes to wander off along the tangent that says the students should not have set fires anywhere near the Cenotaph, then by all means be my guest, and go with my blessing… and a reminder from me that there was a dirty great barrier around the Cenotaph that may not have been entirely visible from your vantage point inside the living room.

Speaking of the view from the living room, let’s take a look at two tweets describing exactly the same helicopter shot, but from differing political perspectives:

For another example, let’s take a look at what the BBC broadcast at 5:05pm (this being the source of the majority of later ‘eyewitness’ tweets): 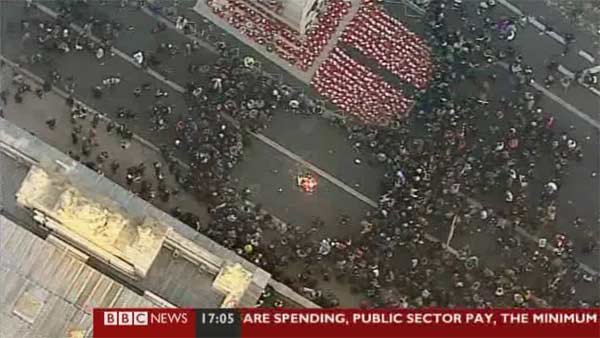 V/O: “The wreaths from Remembrance Sunday still lay on the Cenotaph, surrounded by hundreds of angry and frustrated young people.”

Let’s look at that same voiceover from two different perspectives; one confirms the wreaths lay undisturbed, while the other has them in imminent danger:

The wreaths from Remembrance Sunday still lay on the Cenotaph, surrounded by hundreds of angry and frustrated young people.

The wreaths from Remembrance Sunday still lay on the Cenotaph, surrounded by hundreds of angry and frustrated young people.

In this case, your perception of what you were looking at could have been significantly altered not just by the volume of the television or what was specifically said by the broadcaster, but by the prejudices you brought to the exchange.

But having reviewed the relevant footage again and again and again, I can assure you that at no time did I see a poppy wreath being thrown in the fire.

However, with the luxury of a rewind button and other data sources, I was able to determine that there was a barrier surrounding the Cenotaph (i.e. those who look disturbingly close to the poppies are merely resting on the barrier).

If at this point anyone wishes to wander off along the tangent that says nothing happened only because the barrier was there and/or that it was there because students have a habit of desecrating war memorials, then by all means be my guest, and go with my blessing… and a reminder from me that you may still be operating under the influence of prejudice.

I should stress that I am NOT claiming that the event never happened as described by some tweeters. That would be impossible to do, even with access to all available footage. One actual witness claimed to have seen wreaths thrown (just not onto a fire). Another “saw young students closing the barriers up at the Cenotaph so none got trampled and damaged” (but, if this is true/accurate, we do not know if the barriers were initially disturbed by natural crowd movement or an individual with fuckwit intentions).

But this post is mainly about speculation and prejudice and those influenced by it to the extent that they later claimed to witness something they didn’t actually witness.

At best some of these people later clarified that they meant they saw it on TV. Others claimed it was reported by the BBC (at approx 4pm; prior to the footage I have access to) that poppy wreaths had been thrown on a fire. I have spoken to a member of the BBC who was present with camera crew inside the kettle, and he does not recall anyone reporting this event, or the event itself.

But watch this tweeter change their story before retreating to ‘I saw it on TV’ (read from bottom up); she clearly added ‘from the Cenotaph’ in her mind, even if she heard the words ‘wreath’ and ‘fire’ in the same sentence as others claimed to:

Here’s another who initially comes across as an eyewitness before admitting he’d seen it on TV, and falling back on an as-yet-unnamed witness… but note that he too appears to have added the detail of ‘from the Cenotaph’ (again, you will need to read from the bottom up)

From what I can see, I think it fair to suspect that words were spoken by someone during the BBC’s live broadcast that may have given the impression that poppies were burned, and these were spoken over footage of the Cenotaph. Subsequently, several people made the same leap in unison (followed by a similar event roughly one hour later).

Here’s someone who actually rode past the Cenotaph the next day [later that same day; my bad], and projected damage onto it under the influence of earlier tweets (bottom up, folks!):

I should mention for the sake of accuracy that these are excerpts of wider conversations, and I’ve included a question from me for the proper context in the last. I should also add that the author in this last example expressed support for the students and their cause… but this person (like others) still came under the influence of those who tweeted claims they could not substantiate.

On this note I should also make it clear that not everyone who tweeted about damage to the Cenotaph and/or poppies thrown into the fire was a Conservative; some of them may merely have been influenced by earlier prejudices or may have been prone to certain conclusions/assumptions for other reasons.

– Along the way there were varying degrees of prejudice, and I would argue that the more prejudiced you are in a case like this, the more likely you are to ‘see’ things that you didn’t actually witness. I would question how fair or wise it is to do so without linking to supporting evidence, or giving a false account of your supporting evidence that you don’t link to. (Case in point; this may or may not show what the headline describes, but at least you have the opportunity to make up your own mind, even if it is influenced to some extent by the headline written by the photographer, and I am by no means claiming or giving the impression that I have witnessed an event that I did not actually witness when I link to it.)

– The people who tweeted the initial speculation based on nothing but their own prejudice were the type of Conservatives who are so conservative that other Conservatives tend to be embarrassed by them, and with good reason.

– The later allegation of wreath-burning was later leapt on by those aligned against the students (i.e. in line with Conservative policy enacted by the coalition).

And it is on this note that we return to Peter Ould’s tweet:

What reason did he have to tweet this other than his own prejudice? What purpose does it serve to speculate in this way?

Perhaps these are questions he can ask himself if he can get past any issues he may have with my headline.

Related Post: Anorak – Student Demo 2 In Photos: Will They Urinate On The Cenotaph?.

A Much Earlier Post: G20: Callum Winton may wish to revise his eyewitness statement(s)

UPDATE – One of the authors mentioned in this tweet reports abuse in response to this post. That is against the spirit of this post and my site, and not a nice or constructive thing to do. Oh, and Peter Ould has described this post as defamatory, but has tweeted plans to ignore it. Pity. Well, it’s his call if he wants to ignore me now when I say I beg to differ on the point of defamation, and invite him to simply point out, specifically, how I have defamed him.

6 Responses to "DayX: I sure hope Peter Ould doesn’t rape any children today"