#Dorries: The MP Who Cried Wolf (The Letter, Part Four: A Burglary, Carter-Ruck & Me)

Nadine Dorries is the Conservative MP for Mid Bedfordshire, and the short version of what’s been happening is that she has been claiming to be the victim of multiple stalkers as part of a rushed and reckless cover-up involving secret lobbying groups and some as-yet-unanswered questions regarding monetary fraud.

From 2009 to 2010, the Parliamentary Commissioner for Standards was conducting an inquiry into evidence that Dorries’ ‘second home’ was in fact her first/main residence (put simply; the place she spent most of her time, usually understood as the place where one sleeps most nights). This was an issue because of multiple expenses claims Dorries had made on the basis that her constituency property in Woburn qualified for an allowance that only applied to second homes.

This investigation was, in my view superficial at best, and only took as long as it did because Dorries was being Dorries about it. I also feel the Commissioner was far too trusting of an MP who literally throws the rule book out the window, taking her word on some matters most of us would be expected to support with paperwork. The Commissioner did ask questions about a couple of very recent entries on her site, but I saw no evidence of her public diary being properly investigated. This may have had something to do with Dorries’ site being withdrawn from service for a very long time during the inquiry, but there were before then and still are today dozens and dozens of blog entries going back years where Dorries writes repeatedly of and about Woburn and her time there as if it were her primary residence.

Dorries sought to explain what little she was challenged on with the claim that she had deliberately given a false account of her whereabouts for purely political reasons; specifically, in order to give constituents and her local association a false impression that she was spending the majority of her time in the constituency. The Commissioner bought her story, but Dorries did not expect to have to publicly defend much of what she had told him, and suddenly faced an unexpected backlash about her casual declaration that her blog was “70% fiction and 30% fact”.

So she quickly expanded on an existing lie she had already told to discourage people like Chris Paul from investigating her property, to avoid questions about the relevant expenses inquiry at a local hustings, and to make local critics too shit-scared to even tweet about her; she publicly claimed that she had only published little white lies about where she was and when on the specific advice of police in response to what they recognised as a credible stalking threat.

And on this note we turn to the final segment of the letter Nadine Dorries wrote to the Chief Constable of Bedfordshire in July 2010, accusing myself, two other critics and a political opponent of stalking her: 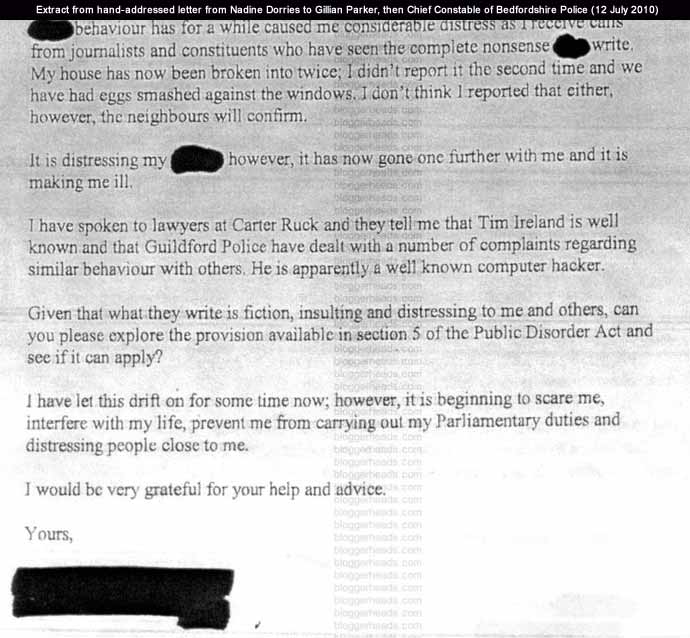 Let’s skip right past Dorries trying to portray me as the source of violence aimed at her; it is too insulting given the care I have taken with my conduct toward others and the dangers she has knowingly exposed me to. I fear I may lose my temper and use the kind of rude words that will allow for further feigned hysteria.

Instead, I’d like us to focus on three simple items:

By the way, this item gets even funnier later. (A new document starting next Monday, folks. You know where to find me.)

This is not the first I have heard of this alleged burglary that was never reported to police. When trying to convince me that poor Nadine was simply a single and misunderstood mother living alone and genuinely frightened by the attention of some awful people, a supporter of Dorries told me the following story. In confidence. I tell it to you now in the spirit of they can go **** themselves.

Nadine Dories claims that in early 2010, shortly before the election, she’d returned to her constituency home to discover that the front door had been removed from its hinges. She further claimed that nothing was actually missing from the house and the only thing the intruder(s) appeared to be interested in were her office filing cabinets, which had all been opened and rifled through.

Chris Paul blogged about Nadine Dorries. Dorries reported him to police as a stalker.

Ms Humphreycushion tweeted about Nadine Dorries. Dorries reported her to police as a stalker.

I blogged and tweeted about Nadine Dorries. I also attended a public meeting I was invited to. Dorries reported me to police as a stalker.

Linda Jack ran against Nadine Dorries in an election. Dorries reported her to police as a stalker.

But when Nadine Dorries comes home to find the front door off the hinges and her filing cabinets disturbed… she does not report this to police. Even if she only reports stalkers to the police, this sounds like just the sort of thing a real stalker might do.

Dorries also claimed to have received multiple death threats, then said here that until August 2011 it was her policy NOT to seek to prosecution. But her critics get the ‘stalker’ treatment. Now, why is that, do you think?

More than two months before she wrote this letter, Dorries claimed that I had sent her and her staff “numerous offensive emails” and other “vile” and “abusive” and “explicit” messages, but she didn’t present any of these to police. For some reason. Even when I submitted a subject access request to her office legally compelling her to reveal what she claims are my emails, she refused to cooperate (!) in defiance of the Information Commissioner’s Office and the Data Protection Act. What possible reason could she have to behave like this?

(Psst! I also find myself wondering why Nadine Dorries keeps her filing cabinets inside her ‘second home’ when any busy person/MP would want them in their main home, but the big question surrounds the potential purpose of this very-neat-burglar story, if it is an invention. It would not be a lie told lightly; it would have a purpose.)

“I have spoken to lawyers at Carter Ruck and they tell me that Tim Ireland is well known and that Guildford Police have dealt with a number of complaints regarding similar behaviour to others. He is apparently a well known computer hacker.” – Nadine Dorries

I contacted Carter-Ruck about the extraordinary accusations Nadine Dorries made in their name. I was curious to know what evidence they could produce to back the assertion that I was a notorious computer hacker with multiple complaints against me, but I didn’t get very far. Here’s their response:

” I can confirm that Nadine Dorries is a client of this firm. It follows that, as I am sure you will appreciate, all communications between Ms Dorries and ourselves are confidential in nature.” – Cameron Doley, Managing Partner, Carter-Ruck

Carter-Ruck were asked about the mysterious circumstances in which I found myself accused of harassment without so much as a letter from their office, but they had no comment to make about that, either. I do not recall ever being warned by Carter-Ruck about the appropriateness of my behaviour toward any of their clients, and seemingly neither do they.

:: If Dorries is telling the truth about her source, where is Carter-Ruck getting this information from?

:: If Dorries is lying about the source, where is she getting this information from?

This one gets even funnier later, too. If you thought this week was something, wait until next week when I start unleashing material from a 4-page ‘report’ that Nadine Dorries sent to Bedfordshire Police in November 2010. Dorries was at the time under pressure to produce evidence of an investigation she claimed had been in progress since before her only known complaint. Behind the scenes, she was desperately trying to initiate one.

It is like they say; it’s the cover-up that costs you… and I’m just getting started, folks.

UPDATE – The full July 2010 letter from Nadine Dorries to Bedfordshire Police (including some notes about what gets released starting Monday).

Related bloggage:
The Strong hArm Of The Law… #Dorries
A further dalliance in the wonderful world of Nadine Dorries

15 Responses to "#Dorries: The MP Who Cried Wolf (The Letter, Part Four: A Burglary, Carter-Ruck & Me)"