#Dorries: The MP Who Cried Wolf (The ‘4-Page Report’ to Police)

Dorries is all over the place in this heavily-redacted ‘report’ sent to Bedfordshire Police in November 2010, plus I am unexpectedly very busy this week, so you lucky blighters get the whole lot at once this time.

If you’re entirely new to this, your smartest path in is here, through Part 4 of the July 2010 letter than was sent before this ‘report’.

NOTE #1 – Some or all of the passages that have been redacted by police are about other people and/or may be the subject of an investigation still in progress, but I should stress that I have seen no sign of any such investigation beyond that into the Flitwick event, plus Bedfordshire Police are very clear about the fact that Nadine Dorries faces no genuine stalking threat.

NOTE #2 – This November 2010 ‘report’ from Dorries, alongside some unseen correspondence (possibly a phone call), immediately preceded the decision by Bedfordshire Police to investigate my presence at Flitwick some 5 months previous to this. Dorries continues to pretend that this investigation starting in November 2010 vindicates her when she was claiming police investigations were in progress as early as May 2010, but she cannot verify making any complaint prior to July 2010. Dorries also pretends that the investigation that did happen resulted in my receiving a caution and/or a warning that my conduct toward her was inappropriate. This, like most of the following ‘report’, is a lie, as the next round of data will prove beyond a shadow of a doubt. Until then I invite you to delve once again into the delusional world of Nadine Dorries: 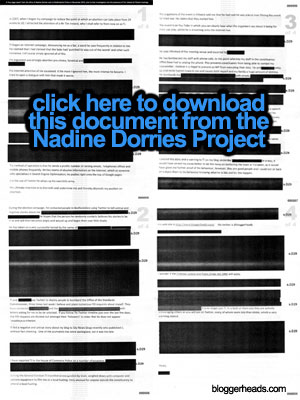 1. Nadine Dorries most certainly did claim that a baby had punched its way out of the womb. If she contends that’s not what she really meant when she described a 21-week-old foetus tearing human flesh as it knowingly thrust its arm out of the uterus, then I invite her to (finally) revisit her comments and put them into context.

2. According to Nadine Dorries, I am a fanatic. This judgement comes from the woman who berates the Church of England establishment as ‘cowardly’ for not interpreting her favoured Bible passages literally and says “I am not an MP for any reason other than because God wants me to be” (source). Dorries could not begin to understand or articulate my position on abortion (hint: the primary objective is honesty in the debate, as it always has been from me since back in the day), so instead she projects her own fanaticism outward. More psychological projection shortly, kids.

3. Nadine Dorries pretends here that she instigated ‘dialogue’. This is one-hundred-percent horse-hockey. Dorries was literally begged to engage in dialogue when one of the people using her accusations to harass me started having a go at my wife and kids on Twitter. That was in September 2010. Dorries still pretended a police investigation was in progress (there wasn’t) while refusing to discuss any detail (no prizes for guessing why) while her dirtbag mates tried to get me to admit that maybe I had harassed her just a little bit (no prizes etc.). Soon after this, I finally received word from Andy Rayment, Chairman of the Mid-Bedfordshire Conservative Association, after months of association staff refusing to confirm or deny if my email had even been seen by him (below). This is the Dorries version of ‘dialogue’. She is right that it made things worse, but not in the way that she pretends.

“I do not waste my time communicating with nutters so do not expect me to respond to any of your communications, electronic or otherwise.” – Andy Rayment (detail)

4. During the decidedly one-sided exchange of information that Dorries laughingly describes as ‘dialogue’, it was made crystal clear to her how a particular person was exploiting her accusations as part of an all-too-personal vendetta; the kind of thing she pretended to be a victim of. This man was publicising my home address alongside the accusations that I stalked women and sent death threats to MPs (two accusations based on the bullshit outburst of a single MP; guess which one). Dorries responded by linking approvingly to this same person from her website, and she did it on the same day that she wrote this ‘report’ to police; November 5, 2010. I suspect I was being deliberately provoked* in the hopes that I would lash out at her or otherwise lose my cool while police were browsing my website.

[*QUICK NOTE TO DORRIES: If this was the intention, Nads, I am sorry, but I learned my lesson after your charming friend Iain Dale used a similar ploy with the ‘paedophile’ smear originating from the same scumbag who later went on to have a go at my wife and kids at a time when we were extremely vulnerable. Dale still trades off the lie that he was harassed, and I am painfully aware that you attempted to make capital out of it in this ‘report’. The only problem is that none of this will stand up in court, should it ever reach one. Dale still refuses to account for his conduct on the relevant weekend, claiming it is ‘old news’ while bringing up his highly-edited story every chance he gets. He even lied about making a complaint to police and knowingly gave people the false impression that I had threatened him with violence. These and other actions he cannot explain indicate that Dale was doing everything he could to aid and abet a smear campaign that had by that stage already extended well into harassment; i.e. the same thing he claimed I was guilty of. This conduct continues to this very day. For as long as Dale refuses to clarify his remarks in a post that he has since deleted without notation or explanation, it remains a problem, and he knows this. So do you. The same sod you linked to on your website repeats Iain Dale’s already-false claims alongside yours, and is allowed to expand on them without fear of contradiction. Meanwhile, you and Dale pretend that his efforts are nothing to do with you. These denials of yours are mere words, and after all your lies, your word means nothing to me; instead, I judge you by your actions.]

5. In good faith, I sought to alert Dorries to the dangers resulting from the public accusations of stalking she had made even before Flitwick. Yes, I now realise this was a mistake. I thought that as an MP even Dorries would think twice before sticking by a lie about a police investigation and endangering my family in the process, but I was wrong. In response to my complaints, Dorries not only portrayed my attempts to contact her about her unsubstantiated accusations of stalking as evidence of my stalking her (!), she went on to knowingly make the kind of public accusations she knew would wind up the same vigilante element that I had been complaining about from the outset. Further, Bedfordshire Police were made aware of every scrap of relevant correspondence, and agreed that it did not amount to stalking, or even harassment. That may seem difficult to understand if you read what Dorries writes here and take any of it at face value, but Dorries has been using repeated lies and distortions about the frequency and content of attempts to communicate. None of it stands up to any scrutiny, but she’s hiding behind the lie that she’s been advised not to discuss the stalking threat because of that same stalking threat; it’s a teeny-tiny circle of pure weapons-grade wank.

6. Dorries really needs to learn the difference between a subject access request under the Data Protection Act, an information request under the Freedom of Information Act, and the act of sharing the task(s) of data entry and analysis of information already in the public domain. Oh, and for the record, the (sadly toothless) ICO has informed me that Dorries was advised of the following: even a convicted stalker would have the right to access their data with a subject access request under the Data Protection Act. Meanwhile, Dorries claims that I sent her and her staff “numerous offensive emails” and other “vile” and “abusive” and “explicit” messages, but she refuses to reveal them, even when legally compelled.

7. The content about ‘Forsaken’ can’t be anything but an outright lie. No calls were made to the Forsaken organisation at all, even Forsaken themselves were very clear about that, and the fact of the matter was made clear to Nadine Dorries on the morning this ‘report’ to police was written. This is important because unlike some tales that begin with a kernel of truth*, Dorries is basing this claim on evidence she cannot have seen and won’t have been told about. More detail on that little event here and here. (Psst! In this letter, Dorries speaks of a ‘newly formed’ charity, but in the House she gave the impression they had been active for at least 2 years.)

(**I actually did send her emails, for example; just nothing like what she describes, or with the frequency she claims. But no phone calls were made to Forsaken. Ever. This detail is entirely invented, and a demonstrable lie.)

8. The ‘Sky news blog’ article she speaks of was fact-checked. Dorries’ objection was that it wasn’t checked against things that she merely pretended were facts. The author stands by the piece and is very clear that he certainly didn’t apologise to Dorries about any of it. I suspect here that Dorries has blurred the line between this journalist and another Sky journalist, or possibly even a mate of hers who pretends to be a journalist and appears on Sky from time to time. Perhaps she would care to clear this up (don’t hold your breath); who does she claim apologised for this article? She doesn’t need to explain why she didn’t tell police that this ‘negative and untrue’ story was about her fabricating a “compelling story about stalkers”; that part is painfully obvious.

9. On 12 July 2010, Dorries wrote to the local Chief Constable to ask if “section 5 of the Public Order Act might apply” to dastardly acts like my calling her a liar (more). On 27 October 2010 Dorries pretended that “the Chief Constable of Bedfordshire Police explored the option of triggering section 5 of the Public Disorder Act” of her own volition, which is doubtful, because there is no such thing as the Public Disorder Act and is the Chief Constable of Bedfordshire Police is not an idiot. Dorries was corrected on this point-of-law-that-does-not-exist (and more) by a lawyer, but after reading the relevant post, all she came away with (eventually) was the correct name of an actual Act.

10. The closing sentence should be used to illustrate ‘chutzpa’ in the dictionary. After knowingly exploiting an anti-social and potentially unstable element against me, Dorries projected the same negative qualities onto my audience. That includes you, Mr/Mrs Unstable Element.

NEXT: I’ve got some more data on the way and a lot of work to do this week (and probably next), but sooner or later we are going to get to the actual police report and what it said about my conduct, and even then, I am only getting started. Nadine Dorries is not the only Conservative who has been conspiring to discredit and intimidate me with false reports to police and false claims about the outcome of those reports; she is merely the loudest. On that note, Carter-Ruck were in touch today. Strangely, they still have no comment to make about this extraordinary claim made in their name by Nadine Dorries:

“I have spoken to lawyers at Carter Ruck and they tell me that Tim Ireland is well known and that Guildford Police have dealt with a number of complaints regarding similar behaviour to others. He is apparently a well known computer hacker.” – Nadine Dorries (read more)