A poor show from the Guardian

As I noted on Thursday, yes, there was some hostility in the many, many responses to the first and only entry in Max Gogerty’s short-lived travel blog for the Guardian… but reading Andy Pietrasik’s response and this editorial follow-up from Caroline Davies in the sisterly Observer, one might get the impression that there was only hostility aimed only at Max… and with no good reason.

This is a shoddy and pathetic tactic; what you’re seeing here is a bunch of adults putting the spotlight on a teenage boy because they daren’t accept responsibility for their own poor judgement… by pretending that those who are criticising their poor judgement are instead picking on that same teenage boy!

And take a look at this…

Caroline Davies – Hate mail hell of a gap-year blogger (Cyber-bullies who attacked young author are accused of class hatred): Max… was last night alone in India at the beginning of his trip, while his father accused his detractors of class hatred and envy… Some contributors were uneasy over the tone of many comments. One wrote: ‘The amount of hate, envy and hypocrisy that’s been on display here is shocking.’

Let’s take a look at the contributors Caroline uses to justify her ‘accusations of class hatred’ sub-header:

2. Some guy called ‘Eleutherios’ who, to date, has only made a single comment on the Guardian website (and just happens to agree 100% with ‘Maxdad’).

I smell a sock-puppet… and I think it stinks that Caroline Davies uses one to support her dishonest argument.

Oh… wait… I think some blind hatred might have sneaked in there. Let me tone it down for you so no-one thinks I’m picking on poor Max Caroline without good reason:

I think it’s a pity that Caroline couldn’t find the time to consider or include this direct response to ‘Eleutherios’ from ‘Fulmerford’ (who, BTW, has contributed to over 40 threads on the Guardian website) in her opinion piece:

Eleutherios, let’s see if you can ‘liberate’ some sense out of this: responding to someone’s comments not with a counter-argument but just by decrying their presumed motivation is a, well, a really shoddy way to debate.

Is ‘ad hominem’ just Latin to you?

If you recall, Nadine Dorries played a similar game, by portraying all negative responses to a personal attack of her own as a series of personal attacks.

And in doing so, they put more weight on the shoulders of Max – the boy they’ve strategically cast as a victim and claim to be defending.

Yes, there was a fair degree of trolling and abuse in the original thread. Though the thread was totally out of control by the time I got there, I didn’t regard that abuse to be helpful… but I also think it’s less than helpful when certain parties seek to exploit the abuse that was there, and use it to draw attention away from valid questions and objections.

Personally, I think it sucks. But I’m obviously a hate-filled lynch-mobbing cyber-bully, so please feel free to ignore me.

Check the comments. It’s his first day out and it’s all over.

Someone doesn’t understand the meaning of ‘respect’…

WJZ Baltimore – Officer Suspended After Appearing In YouTube Video: A 17-year veteran of the Baltimore police force has been suspended with pay pending an internal investigation of his actions involving a 14-year-old skateboarder at Baltimore’s Inner Harbor.

Baltimore Sun – Inner Harbor incident hits Internet: A Baltimore police officer was suspended yesterday after a YouTube video surfaced on the Internet showing him berating and manhandling a teenage skateboarder at the Inner Harbor. On the video, the officer, Salvatore Rivieri, puts the boy in a headlock, pushes him to the ground, questions his upbringing, threatens to “smack” him and repeatedly accuses the youngster of showing disrespect because the youth refers to the officer as “man” and “dude.”

And you can watch the relevant video right here. Dudes.

UPDATE – Hahahahahaha! Check out the last words spoken by the police officer just before the video stops.

Please check this post for a short but important update.

Posted in Anne Milton | Comments Off on Anne Milton’s version of clarity, transparency and openness

Posted in It's War! It's Legal! It's Lovely! | Comments Off on Join the March 19 Iraq War Blogstorm

Posted in Consume! | Comments Off on 36 quid? A bargain! 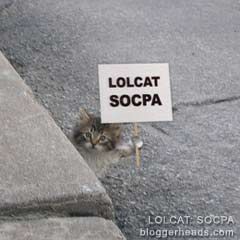 About a week ago, I submitted a big pile of forms applying for permission under SOCPA to stage a series of events in Parliament Square.

The purpose and details of each event were described as follows:

OH, HAI. THIS IS MY MESSAGE. I WILL CARRY AS BANNER OR WEAR MESSAGE IN BIG LETTERS ON T-SHIRT:

Then, on each form, I provided the message that I wanted to display prominently within the designated area. Each form specified a 15-minute window during which each individual message would be displayed.

The police took their sweet time granting approval (I had to request that the document be faxed this morning, and this was managed a mere 10 minutes before the first demonstration was due to start) but the important thing to remember is that permission was granted.

Here… look for yourself:

If the police receive an application that does not require police permission because the police do not regard your intended action to be a demonstration, they tell you so. Here’s an example of this kind of response:

OK, so by now you should be up to speed; here it is in a nutshell (and I really can’t stress enough how absurd this is)…

The police have, in their wisdom, decided that police permission is required before displaying *any* of the following messages within a designated area:

– I CAN HAS CHEEZBURGER?

– I MADE YOU A COOKIE… BUT I EATED IT

– I CAN HAS FREED SPEECH? KTHNXBYE

– FLOOR IS LAVA… SO I’S CLIMBIN UR FURNITUR 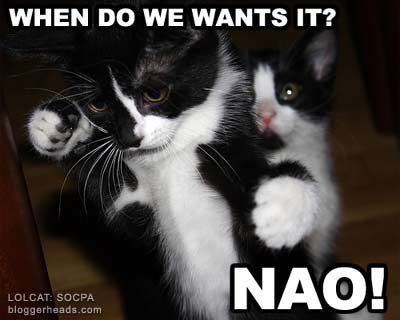 – IM IN UR DESIGNATED AREA… SUBVERTN UR LAWS

– IM IN UR DESIGNATED AREA… BEIN A LOUD SPKR

– RANDOM CAT IS NOT AMUSED

– TAXPAYER CAT IS NOT AMUSED

– IM IN UR BEACHES… FIGHTN UR NAZIS

– I HAS THE TORTUR EVIDENZ… LET ME SHOW YOU DEMZ

I know… bizarre, isn’t it? I can understand some of the messages being interpreted as political in nature, but what has the world come to when you need police permission to ask if you can has a bloody cheeseburger within 1km of Parliament?! 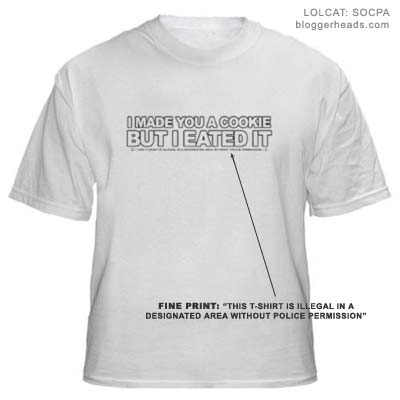 Anyway, from today, I’m launching a brand new series of t-shirts that are illegal within a designated area without police permission.

All you have to do to win one (with the slogan of your choice) is break the law!

Simply pop down to Westminster, have your photo taken in front of Parliament while holding a sign that reads ‘I CAN HAS CHEEZBURGER?’ and send your photo to this email address:

The first authentic photo in my inbox takes the prize.

Have fun, and have a happy Valentines Day.

(I love you Internets!)

[Psst! Police peeps! Some of us aren’t as tricky as you lot, and we’d appreciate permission being granted before the demonstration is actually due to take place. Lift your bloody game. Also, it’s generally a good idea to put your hand over the phone before saying something indiscreet (such as; “He’s obviously one of these people playing a game!”) to one of your colleagues.]

[Ta to Cornelli and AZAdam for their kitty images, altered and offered here under an attribution-share alike licence.]

UPDATE (16 Feb) – Ladies and gentlemen, we have a winner! D-Notice will be receiving an illegal t-shirt with his slogan of choice in the coming days. Shirts* should also be in the Bloggerheads shop soon, so hang in there.

(*Yes, every slogan used will first have to pass the ‘Do police regard it to be a demonstration?’ test first. I’m quite looking forward to the paperwork on some future non-LOLCAT slogans.)

Half-Time Special: Act III (Nick and Elroy and a regrettable incident from their past)

You may recall Nick and Elroy appearing to defend Mr Secret Agent Man on an alternative and rather NSFW version of this Newsnight appearance. These chaps found their way out of a box during an attic-clearing process last year, and they now have a cosy little home (i.e. a brand new box) in my freshly-tidied office.

Nick and Elroy were built by me (along with another puppet that looks a lot like Michael Jackson when you take his sunglasses off) for the first music video I directed/produced for broadcast all the way back in 1995.

That video is now available online. I hope you enjoy it.

Trivia: That’s about 20 Australian dollars worth of icing sugar, just in case you’re wondering. The puppets were built using an old stuffed polar bear and the arms from an atrocious cardigan. The location was decided by a total failure of a battery unit; we were forced to string a series of extension cords together and shoot the external footage in the alley behind the studio.

With regards to the Christian religion, I keep myself a (mostly) respectful arm’s length from the fold.

I think this position is best encapsulated in the relevant category on my website; it’s titled “Christ…”

What you’ll find when you explore that category is (a) that I have a shocking level of intolerance for bigotry and those who exploit it and (b) that I’m likely to get especially riled up if people like that deliberately misrepresent someone else’s position in order to diddle fair debates and start false ones.

Key examples of this can be found here and here. In the latter, you’ll also see a fine example of sock-puppeting at work and – even though we’re all still enjoying half-time here – it would be remiss of me not to point out where some parallels between the skills of misinterpretation and sock-puppeting may exist.

And if you have any doubts about your own position*, I urge you to read Sunny’s article. And Garry’s. And Justin’s. And Septicisle’s.

[*Hint: The best place to start is by finding out what Rowan Williams actually said.]

Torture: Brown and the boy Miliband each need to grow a pair

David Miliband: “There’s absolutely no question about the UK Government’s commitments in respect of torture, which is illegal, and our definition of what torture is.”

Even if we take his statement as the position of a new administration, one has to consider that Jack Straw is a senior member of Brown’s cabinet (unless of course they ask him to leave the room whenever torture policy is discussed) and the best we’ve seen out of them so far is this pissweak effort.

UPDATE – And now, a musical number especially for Jack Straw:

Posted in Gordon Brown, It's War! It's Legal! It's Lovely! | Comments Off on Torture: Brown and the boy Miliband each need to grow a pair